The SEGA Survey is back and they want to know what games you want to return such as Phantasy Star Online, Virtua Fighter & Jet Set Radio get signing today

Yeah I filled this out last night. The fact that Nights, Skies of Arcadia and Eternal Champions aren’t on there kinda sucks, but at least they had a spot to list some other games. I also wouldn’t mind seeing a new Panzer Dragoon Saga, but oh well.

Either way, it’d be awesome if they actually put some new iterations out in the series’ they mentioned like Virtua Fighter, House of the Dead, Jet Set Radio and Shinobi. It kinda boggles my mind that some of these franchises sit and do nothing when they have peers in the same genres that do rather well. Could you imagine an Eternal Champions with Mortal Kombat 11’s graphics or a Virtua Fighter 6 that looked as good or even better than Tekken 7 or Soul Calibur VI? A Shinobi game that looked like Sekiro would be amazing too.

Not sure what to compare Skies of Arcadia to, as it’s such a unique franchise in my mind. Maybe Skull & Bones but set in the sky and a full on JRPG? lol

Either way, there’s so much they could do, so much I’d love to see, and it’d be awesome if they could find some studios internally or externally that could make some of these a reality. If Iron Galaxy won’t be making another Killer Instinct, then it’d be pretty great to see them working on a new Eternal Champions. Some of these, I’d just be happy with beautiful, upscaled remakes like Nights, Panzer Dragoon, etc.

Perosnally I’d like to see a new altered beast and Eternal Champions.

The first question on the survey was the first time I ever encountered such a question on a survey. Not sure how to answer so I was kinda stuck

wanted to vote for VF, a game that sadly won’t come back…

I’m not able to access that survey at the moment - is Golden Axe on there? I would love to see a new Golden Axe game with a return to the side scrolling beat-em-up, using similar gear, leveling up, and character progression as the old D&D side scrollers…

yes golden axe was on there

i voted for it as well.

a new phantasy star online would be amazing, i remember playing the very first one on the dreamcast back in the day. i loved that ■■■■ game so much, it was so good especially the minigame where you raise your mag pet thing

shinobi was also another game i voted for, the last one that came out was like 17 years ago for the ps2 and was in 3D. i would love to see a new 2.5D iteration of it, or make it 2D with sprites like arc sys works did with hard corps though it had 3D back grounds. id even be happy with that, or go the hand drawn route like that one muramasa game on the wii. it’d be awesome if altered beast went that route as well, with 2 player couch co-op like the old days

The top 3 votes so far are

replace jet set with altered beast and im good to go, id say to hell with VF as well for shinobi but im always up for another fighting game

Sweet. Thanks for the link.

i dont mind if another comes out for sure, its always been a fun game. i recall nearly getting into a fight over it at an arcade back in 2004. i guess…id be mad too if i lost 50 bucks in a 1 shot match. lol

Off topic, but this (non Sega) game always gave me a Jet Set Radio vibe. Looks and SOUNDS awesome…

And yeah, Altered Beast!! I need that game so much. LOL 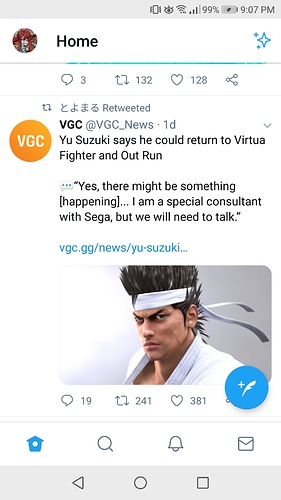 id be down for that! …but cmon…when’s altered beast, we could use another

Honestly at this point I think Sega just don’t know what to do with the series. They’re stuck between pleasing the hardcore base or the casual and upsetting one or the other.