Today be the launch day of the BIG Sea of Thieves beta, and I thought of a really cool way that Rare’s new pirate epic and Killer Instinct could cross paths- A new skin for Spinal! 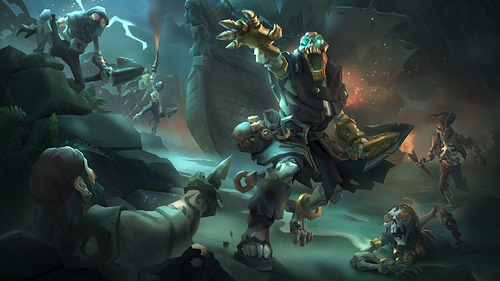 The Gold Hoarders are a special guild in SoT whose members are completely and totally absorbed in the singular goal of amassing as much gold, jewels, and any sort of other treasure, but sometimes these loot-hungry pirates come are reanimated after death, leaving the living to get these blinged-out skeletons to take a final dirt-nap.

The skeletal Gold Hoarder enemies from Sea of Thieves are a really fun design that exemplifies how far these pirates took their greed, and that they brought their love of wealth with them beyond the grave and back! How cool would it be if Spinal got a brand-new skin to become a Gold Hoarder pirate himself? (The design I had in mind would be based off of the emerald-eyed freak in the art scattered in this post!) 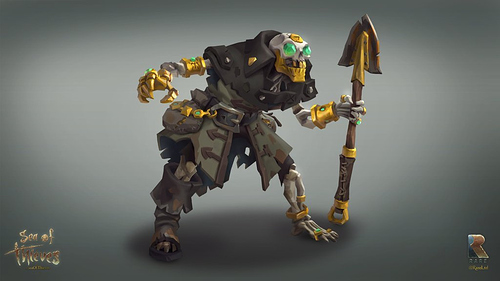 After all, Thunder got a special skin via the “Legend of Thunder Pack,” and it would be extremely cool to see Killer Instinct reflect the release of Rare’s latest game by adding a new gem-encrusted pirate skin for everyone’s favorite crazy fightin’ pirate skeleton.

I don’t think you should expect getting anything more for KI.

I asked Craig Duncan (head of Rare) a while ago if Spinal was in SoT, but he didn’t answer me either way.

@MasterZenek Yes, Yes and Yes !!!
A sea of thieves skin for spinal !
I would buy it immediately !

Leak discussion is not allowed, real or fake, KI or not KI. 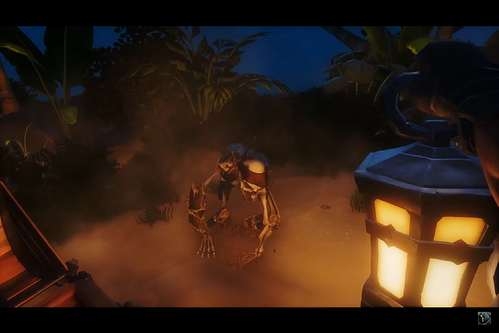 You know, it just hit me that there was a skeleton in the 2015 E3 trailer that strongly reminded me of Spinal, and it’d be a HUGE missed opportunity if Rare’s most famous pirate skeleton wasn’t in Rare’s biggest game about pirate skeletons…

In any case, we don’t have too much longer to wait before we find out!

I’d kill for another Spinal Skin!!!

Make Spinal one of the bounties you have to go after. This would be amazing.

I would’ve gone one better and say that Spinal, through a licensing deal, should be a boss in the game for the order of souls in SOT given that the order seeks the skulls of cursed pirates (as far as I remember).

But the skins not a bad idea, shame no skins have audio due to the way the engine works IIRC.

Dude, I’ve spent the past 48 hours wracking my brain to think of a suitable “audio skin” to revamp the vocals/various fighting noises for our 29-fighter cast, and I can’t think of anything. Even the skeletal Gold Hoarders monster that I suggested as a bonus skin for Spinal gives off Spinal-ish sounds, save for our skelly’s trademark cackle!

Do you have any ideas for “audio skins” that could be applied to our current roster? The only audio variant that I can recall from a fighting game was the inclusion of a very few specific weapons from Soul Calibur 2 that would make noise when you hit your opponent with them. (I remember thinking “Oh, cool! There’s a stone caveman club!” and promptly tossing it aside after one fight because it made LOUD OBNOXIOUS ELEPHANT SOUNDS THE ENTIRE MATCH.)

With that said, I’ve got good news for you: There wouldn’t be any sort of “licensing deal,” to worry about, since Rare owns both Sea of Thieves and Killer Instinct from the get-go, so as far as Spinal goes Rare would just be taking back one of their older toys to play in a new sandbox.

I mean there’s one that’s already, technically, been done in KI, that being the original release version of Shadow Jago. Unfortunately that can’t be accessed now (as far as I know) though maybe it’s possible to play Season 1 with him if you have the file? I might look into that myself but I doubt it’ll work.

As for other ideas for KI in general though, just think related games for example - Tusk=Soul Calibur’s Nightmare/Siegfried, Orchid=Joanna Dark, Riptor=characters from Primal Rage… etc.

I don’t want to derail the topic any further but I still think ideas like this could be transfered into a sequel given that IG are allowed to work with their own engine and audio ideas etc.