Retro costume Poll what do you think?

You should know how lazy I am by now…Here goes nothing:

Gargos: Great (Wish his head was a little bigger

This bit. OMG I hate Fulgores like with a passion. It’s the only one what looks like a toy and not made out of any real material.

Fulgores oringal design is so good that I can’t understand how it can be made this bad.

So what exactly is Sabrewulf’s Retro supposed to look like?

Since Everyone hates it.

I think Fulgore’s is more of a throw back to his Comic Book retro where its actually Eagle in a Robot suit.
Do you have the comics or have you seen this issue?

His retro is exactly this “suit” style.

I would prefer it be like KI classic though

dev 1: We need to make Retro Fulgore
dev 2:…mmmm…we don’t have time nor money
dev 1: do something, I don’t give a ■■■■
dev 2: I have something I did on lunch break yesterday
dev 1: perfect, go with it

Reminds me of spawn.

I feel a lot
Of Retros could benefit
From attention to detail, as in Orchid should not have legs that look like the green is painted on the legs they should be BOOTS covering her legs. With six slots maybe they could add at least Three with the shorter boots- why does the pink retro have purple stockings and why does the white and olive have short boots only-

Kim accessories for retro do not mix well at all, but great design of have rather seen something along the lines of a school student or a martial arts teacher rather than a workout tank over a formal Chinese top?

A ton of them are hit and miss.
All have small problems that can be solved with tweaking the models (Can’t be said for everyone’s). If I had to rate all the costumes together in one score, it’d be about a 3.5/5.

Only a small number really hits me in that nostalgia area and the rest makes me feel disappointed.

Best would have to be Glacius, Worst is Sabrewulf. To be honest, I was almost offended when I saw Sabre’s costume after they announced that the classic costumes would make a return. Sure, I’m over it now but doesn’t make it any less disappointing to look at.

I was incredibly let down with SW retro, we have all heard the weird lab rat references to him and they are true! He was such a great character in both of the original arcade titles, and he looks amazing with his updated look…his retro is a big miss. Its on par with the Thunder retro imo, but that’s a whole different story.

I really enjoy the characters and their costumes. That being said, i wish the girls were more ■■■■■■ in appearance and I’d like a couple of the males to have a banana hammock option.

I think Fulgore’s is more of a throw back to his Comic Book retro where its actually Eagle in a Robot suit. Do you have the comics or have you seen this issue?

His retro is exactly this “suit” style

Yeah I have these

. To be honest I don’t see a massive difference from the K1 model. At least he looks like metal?

Looks at all the shimmering detailing and panels.

I hear you though! I can’t understand how anyone wouldn’t have selected KI2 Fulgore to remake… I also can’t understand why there isn’t a gold colourway version it would have been a lovely nod to the n64 and suitable for Fulfore OR Aria 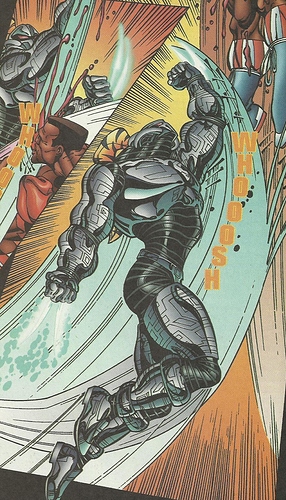 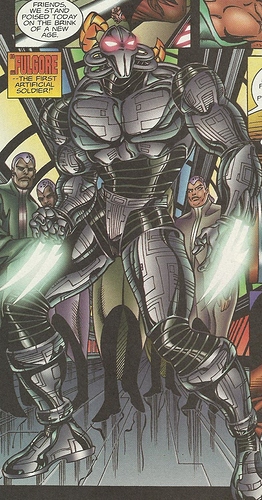 Did fulgore kick the crap out of TJ?

I agree with most of this.

My main problems with the retro Sw are the eyes and the way he looks bald. Like @KiHazard said he looks like a rat.

It would have been nice for him to be remained like he was in the comics. 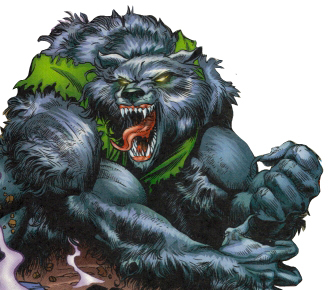 I kinda love the fur he has… I’m sure the xbox won’t break if he copy and paste a few more of those to fur him up. Along with that his head should be wider and stronger.

His fangs were also super long. 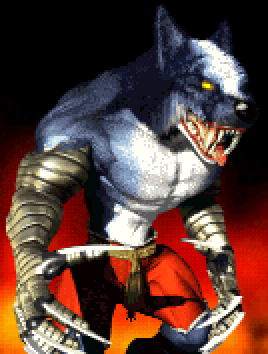 Look at these two pictures. There is a massive difference in the head and the fur around the mouth area and chest. 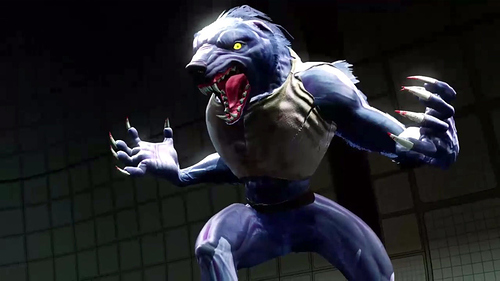 For me I like to see decent effects and graphics. I think the pixel effect in KI is AMAZING. I can also say the same for glacius’s translucent effect. The way Kan-ra bandages move around him are incredible but still simple.

I’d like everyone to have u unique selling point and I think that’s what’s missing from the retro.

If I was to go one step further I’d add effects to the retro. Even the most faithful costumes could be back up with something like these: 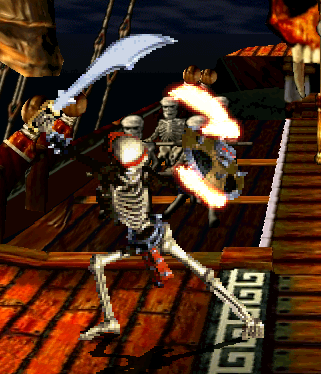 The way the powers go around spinal shelf instead off the whole thing. It doesn’t trave to be on every move but one or two nods would have been amazing.

The way glacius had the ice fog around him even as he walked? 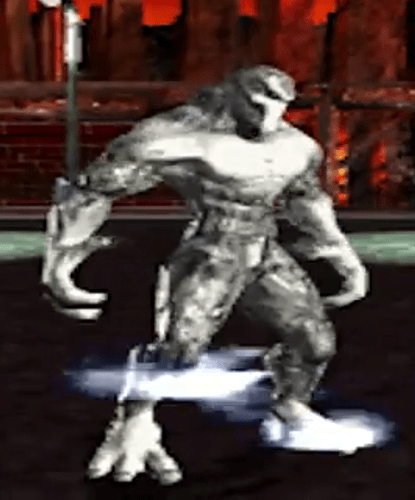 Most of the retros I’m fine with.
Probably about the only ones I don’t really like are
-Saberrat in a non-green shirt.
-Fulgore’s head.
-And Gargos’ face.

Jago would look better to have his hair longer and looking less like McDonalds arches. May be a bit more emoey. Once you are in the game the costume looks pretty sick

Sabrewulf could look alot better. I loved old sabrewulf from 1 & 2

Thunder needs a whole re-design. We all loved his original costume. His killer mohawk, with some kind of make up over his face. he looked dark and menacing. No he looks like a 65 year old biker. Bring back the iconic version of him asap

Sadira, well we cant really do much about that as we didnt know her for squat. Costumes arnt bad tho

Orchid needs a black costume. Maybe more buttcheeks. Not as in multiple arses but just reveal them a bit

other than that, one of the, if not the best retro of them all

Fulgore…Cant put my finger on it. Its just off. he looks fat like santa

TJ. He needs an 80’s fade for sure. Not sure how else to make him look better. Maybe clean him up instead of being so rugged. Like i said, not sure.

Riptor. Well he looked more like a snake it the first one so I guess they did a good job.

All round decent job I’d say.

Sabrewulf was Hench back in the day.