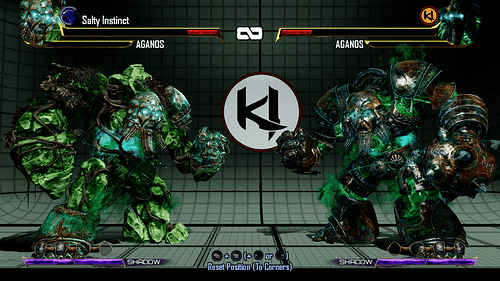 Holy ■■■■. I’m using mimic Arbiter and no one can stop me. How do accessories work?

You don’t get to use accessories but still, they are sick.

I had not seen it yet but Aganos is another one of those characters where the mimic really compliments them IMO. Spinal and Shago also look amazing in their mimics too.

I really can’t stress to you guys how awesome both the mimic skins are for the golem (so much better in motion). On the regular, he looks like he has fireflies surrounding him and the retro looks like it’s haunted.

When I booted up Shadow Lords, I had the prerequisites for a decent number of characters.
-Glacius, Sadira, TJ Combo, Kan-Ra, ARIA, were ready to go the next time I fought a mimic of/used that character.
-Additionally, Jago, Riptor, and Tusk are nearly there with around 5 wins each!

I’ll need to get around to posting them. I think it’s a really nice surprise to see that we get a Retro Mimic as well!

@oTigerSpirit and I noticed that Jago looks absolutely SICK when he has/Uses Instinct using his mimic skin. He glows a bright green.

Right now I only have mimic TJ, which I saw on another thread somewhere, I can’t post a picture right now, but if I remember to I’ll update the post later. I’m not a big fan of most of the mimics, although omen is to die for, and gargos looks pretty cool too.

I posted these in the Shadow Lords forum.

Yeah! It does look sick, I didn’t much like the mimic skin but his while having instinct is awesome.

I unlocked the TJ Combo skins on my first match last night ha, didn’t expect that. Either that was a glitch, or the requirements for his were extremely low and I just happened to fill it up 99% during the beta
period.

If you had already met the requirements during the beta then it unlocks after your first fight, all you have to do is beat him 10 times, so you might have done it during the beta,

I have Jago, Omen, Gargos, Rash, Arbiter and General Raam so fare

Can you post pics of the RAAM mimics if you’re able to?

I got them all! Mwahahahaha! Soon, you shall face my mimic army!