Overall? I’m happy with her so far. Obviously, I can’t really comment on the gameplay, but she looks like she’ll be a fun challenge.

Design-wise, IG once again has hit it out of the park. What I like a lot about this particular Kim, is that they didn’t go in the far opposite extreme end of the design spectrum with Kim, compared to her 90’s counterpart (i.e. look at any “practical” fan redesign of a character like Power Girl from DC Comics). Instead, they just updated the basic gist of her original appearance with more modern sensibilities in mind. That’s a very good example of being practical, but stylish.

As for her attitude, I for one, like it. She reminds me a little of Yuffie from Final Fantasy 7, give or take. I wouldn’t be surprised if her cockiness came from having her ego built up over the years with being a “chosen one”. Or maybe she’s trying to mask some kind of insecurity because of said expectations or something, I dunno. Doubtful the game’s story mode will go into more detail there (all the more reason why I wish MS would do a ‘Tales from the Borderlands’-esque spin off game), but I think there’s potential for Kim’s personality to be more than it appears at first. Who knows, maybe she ends up being a protoge to Jago, and given the Dragon Spirit? Maybe she ends up as Shadow Kim Wu at some point and learns humility from it.

… Ah, who cares about that stuff, I think she’s pretty awesome so far. Can’t wait for S3!

I shouted that when I seen it lol

She needs a nerf, everyone else got nerfs so why not her??

Anybody else think Kim Wu gameplay wise reminds you of Yun from SF combined with Liu-Kang from MK?

However I always thought Kim-Wu was garbage and if she were forgotten I wouldn’t have batted an eye. However she Looks Fantastic, she looks Normal, she looks like a Person. The BEST female face done in this Game so far. FAR more expressive than Maya and Sadira in every way. The fact she accurately looks like she’s from East Asian is just pure talent to me.

It’s rare for someone to actually look Asian in animated things without a bit of exaggeration, because in the video game and artistic world the features are very subtle compared to other physical features humans can have. IG Nailed it absolutely there is no way anyone can say she doesn’t look like her “race” and with her having Bright Red Hair to boot and still she Looks Accurate in everyway.

Oh god you use the term salt/ salty…sigh sad face

What is the significance of bright red hair to being Asian?

I think she’s pretty damn close to the original Kim overall when it comes to aesthetics.

That was a reference to a movie in fact, like the truck at the end.

I REALLY like her. I like the smugness of her personally. It really brings out the, “You’re not brash if you can back it up” style. She hits like Jack Burton’s truck on steroids! LOL

Her Firecracker move is amazing. And she can reflect Projectiles!? And Ground bounce for juggles!? AND PARRY!?

I only wish she spoke all Korean!
Other than that she’s perfect!

(Is her voice actress Asian)

A) Street stage with neon signs

B)she be cynical and bratty in nature Hmph

And you were right about the brashness of her & street stage, lol

I’m ready for tons of Nunchuck action, Reflects for spammy people, and Parrrying EVERYTHING. LOL.

Seems like you, @SigmaAngelus and I might be the best Kim Wus on the forums! You ready for Kim my friend!?

While my reaction to her personality wasn’t this pronounced, there was a moment when I said to myself "obnoxious loudmouth?? THAT’S the direction IG chose for the dragon guardian?.. On purpose?!"
It really does make the character less likable.

But overall I see it as a minor thing against unique playstyle and cool animations.

I think she’s great. I was never a Kim Wu fan, but I pretty much love the redesign. It looks fantastic. Love the nunchucks and I also love all the visual effects. The stage is not at all what I expected but it has depth and character. Love the Big Trouble in Little China homage truck and I love Kim’s personality.

Can someone gimme a “Hell Yeah!”

That’s all I gotta say. I’m off to prep my PC for my day 1 purchase

To be fair she’s still a collage student so it kinda makes sense for her attitude to be that way. This is from experience mind you.

TBH, I’m a college student, and if I knew I was the descendant of the Dragon Spirit, destined to save the world, and I knew Kung Fu and beat everyone,

I’d be cocky too. Lol Natural Reaction due to an increased Ego.

Exactly! Lol I’m sure she knew Kung Fu before, but like you said, 6 months of Dragon Spirit power.

So yeah, I’m sure anyone would be cocky under those circumstances.

I hope they give us a Beta.

Here’s another screenshot I made for celebration 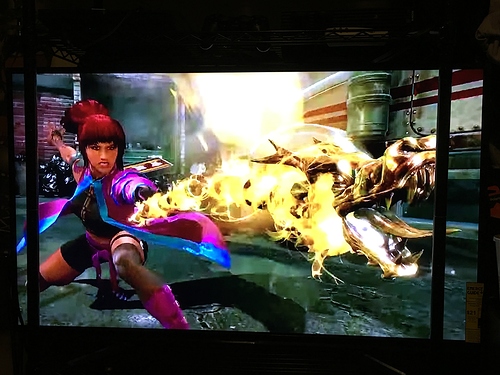