Orchid and Kim Wu in Dead or Alive 5: Last Round (Mods)

Someone is making tons of mods for DOA5:LR, and this one popped up: I can’t deal with how people make Orchid so pale! I’ve never seen her as “white caucasian”, and even if she is, she’s ALWAYS had a tan. It annoys me endlessly.

Otherwise, this is a pretty cool rendition of her Killer Instinct 2 outfit. You can see more here: (WARNING!!! Some of it can be rather NSFW)

I have no interests in that game. But… I never thought someone make KI skins mods for DOA characters! It’s pretty cool!

and that orchid costume looks better than orchids retro

What’s with their faces? They look…off. They look like doll faces.

They even made Kim Wu’s Alt! 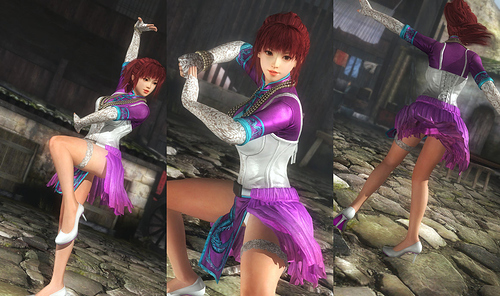 I can’t wait to see Jago and Shago mods for this game.

Well. Time to buy DoA and play for about a week.

Those mods are pretty.

It’s the DoA effect. Females all carry that youthful look regardless of profile age.

Hey, my wife must have the DOA effect as well.

(BTW, she agrees with my above post, in case you were wondering).

no they don’t. I own one of those (teenage daughter, that is)…they don’t look like that.

Ever read a doujin before? Or seen anime?

I wouldnt mind seeing mods on xbox for DOA like Bethesda is doing with their games, but wont happen, probably in the first place because outfits are their main moneymaker…