Keits just teased that Sadira will be getting a new combo trait for update 3.4 today on the Weekly Galaxy.

Let the speculation and hype (for Sadira players anyway) begin.

I forgot what her combo trait is now isn’t it her double jump or performing an autudouble in air?

Air Juggles. Not that unique anymore with Cinder around.

Back when air combos used to be Sadira specific, they were her combo trait.

Well that’s good about time she got something good I used to use her a bit back in S1&2 but she’s been kind of meh to me this season.

I missed it. Lol.

Hope its something good she used to be my main until the middle of season 2 when I dropped her to spend more time with Maya.

Right after I started playing her, too! It’s like they’re making this game just to please me…

Hmmm lets see. How about, launcher doubles? Hold the double button down and the second hit turns into a launcher so she can enter juggles at any point during the combo system.

This sounds awesome! Give Sadira a new way to be beautiful and frightening. I hear there’s a pretty big list of changes coming in 3.4, (“6/10 on a scale of big.” -Keits) so I’m looking forward to it.
In a game loaded with lots of awesome juggles, it’ll be awesome to see the air combo queen back on her throne 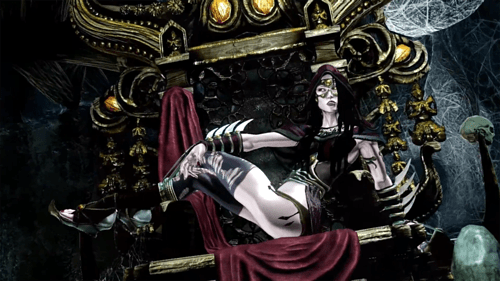 What could these extra goodies be? Full Air Combos with Doubles, Linkers, and Enders could be it. Maybe some more utility to Shadow Webcling or her ender damage? I’d say poison but RAAM already has that…

I’m probably wrong, but I’m guessing that her combo trait may be how she ‘entangles’ the opponent while in the air, yet not in the same extend as her Instinct Mode. Something that may utilize her air specials like Web Cling in the middle of a air combo to trap the opponent.
But again, I’m pretty sure I could wrong, cuz to some extend, its almost like Cinder’s air combos through his Trailblazer and Pyrobombs.

Maybe something that will recapture.

Please let it have unique animations. That’s all I’m asking (which is quite a lot though, lol)

At least IG has realized what many Sadira mains have realized, that despite always being good, she was seriously hurting this time around.

Anything they can do to help us increase her damage will be most welcome. I am officially excited!

This just made my day! Thanks IG! Can’t wait to see what kind of spider inspired trickery she gets.

Using salticide against an airborne opponent makes sadira use a web to pull them up. Also Sadira can cancel any air normal into salticide. So, for example:

Also IMO she isn’t going to get a recapture/flipout

There is a lot they can do for her. I think some sort of way for her to increase her damage would be the most beneficial. I’ve had several fights I lost simply because the individual could out stamina me. It would be nice to END a match instead of having it linger on for too long, just for them to have a miraculous come back.

In terms of allowing her to put webs up without Instinct. It would be interesting, but I think that it could make her a bit too over powered. The tech I perform with webs can end a match once started.

Of all things Sadira mains have cried about since the beginning of S2 was air auto doubles. I think these could be crazy powerful in the fact that you would also be able to mix manuals and thus make Sadira’s air combos much harder to break.

The only bad thing…

I want it NOW!

It’s almost certainly not going to be a recapture or flipout; a combo trait implies it’s something she gets to do that other characters don’t.