This pic is just for the idea

What would your character idea be 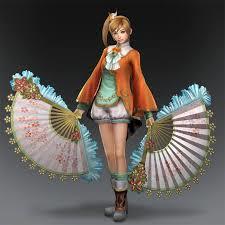 Name: Mizumi Han
Age:19
Height:5’9
Nationality: Japanese-American
Weapons: Twin fans
Combo Trait (Mad Fan Dance): she can link her Fan throws between combos and go to any auto double without a pattern
style: Projectile Balanced
Instinct: Wild fan storm: This enables her to use her fans to cancel into manuals, +2 attack Frame

short story: a close friend of Kim Wu’s, she wants to assist her in defeating Gargos even though neither one of them know who Gargos is, she sets out meeting new allies to help in the fight

+P (Does a Cyclone that traps the opponent in mid air)
Lighting Kicks:

+K (does a flurry of kicks)
Drill Kick:

+K (similar to Cammy’s spiral arrow, but can go in three different directions Based on Kick strength) (LK=low profile, MK=mid strike, HK=Anti Air, but not safe on block and not a good wakeup)
Rising Fan:

+P (Does a spin with her fans that can be done 3 times if done correctly)
(Air) Wind Cutter:

+K (Similar to Juri’s Sommersault, and has juggle capabilities)

+PP (Throws both fans and does 10 hits of damage)
Shadow Fan Lift:

+KK (does a barrage of kicks doing 7 hits of damage)
Shadow Drill Kick:

+KK (does a powerful drill kick that switches sides with the opponent landing 5 hits of damage)
Shadow Rising Fan:

+PP (does 6 hits of damage launching the opponent for a strong wakeup)
(Air) Shadow Wind Cutter:

+KK (can do 8 hits of damage, perfect Juggle state, can stagger)
Storm Dance:

+LP+LK (if instinct is active or if shadow bar is full, she does a spinning attack that does 21 hits and the strength is determines of how much instinct is left using instinct)

+LP+LK (different version of storm dance called deadly dance which sends the opponent into the air, and she throws both her fans in the air keeping them suspended in mid air for her to jump up and slam them to the ground, finishing with a twin fan slash to the neck “off camera” and she backflips off posing with one fan covering part of her face)

taunt: She fans herself saying “come on, I’m getting bored”

So moveset is basically Kitana+Chun-Li+Cammy?

Not bad, not bad. I will say that throwing fans mid combo sounds a bit like Maya and that doing doubles in any order is kinda like what Shadow Jago has currently, but its not bad

I like it! Im not a fan of playing female characters…but I know a good idea when i see one! Great job!

In case your wondering what her Ultras and her poses looks like, it goes kind of like this

Ultra: (starts by opening her fans in a spinning motion) she throw two fans, (one at a time) and follows up with 5 kicks, switching sides with a low profile drill kick (1 hit), then does a twin fan swipe(counts as 1 hit),a low punch and a forward moving reverse fan spin that hits 3 more times following up with a double slap and a side kick with a split kick (something like kim wu’s light dragon dance) then does a spin attack with her fans out like a cyclone hitting an extra 6 times juggling to a sweep then a fan lift, she then finishes off with two wind cutters and ends it with a 5 hitting rising fan and finishes with an air born somersault kick ( 37 hits all together).

Ultra ender: she does a fan swipe that does a wind slash causing a wall splat if opponent is still on the ground, but in the air, causes a wall crash.

Stage Ultra: for stages like Tj combos and Kan-Ra’s; she does a 10 hitting lighting kick and finishes with a hard Fan Lift, For the other stages( Aganos, Hisako, Aria): she does 3 lighting kicks with a triple hit Drill kick and does her Ultra ender.

Intro Pose: She back flips onto the seen throwing her fans and catches them on landing saying “Don’t go easy on me because I’m Young”.

Win Pose: She held one fan out saying “We’ll fight again someday, it was fun” then somersaults back with one fan behind her back and one in front of her face.

Stage Ultra Win Pose: (similar to Mai Shiranui’s Win Pose) she throws her one of her fans into the air and catches it opening it with a wink.

Win Time Out Pose: she somersaults back and throws a victory sign saying “Yay, I beat you”

Lose Time Out Pose: she drops to her knees dropping one of her fans on the ground holding the other one close to her face holding back her tears.

@Sasuke99I in a way, but are different to their moves, because of her combo trait and the effects of her moves

Yo This Sick Bro Nice Artwork