Theres no way we have all these guest characters in Killer Instinct and wont be getting a Mortal Kombat guest. It just feels wrong not to have K.I’s Rival game apper as a guest in some way shape or form, so a MK character needs to show up at some point. Scorpion is the Obvious choice that everyone will want and he is good and all but I was thinking more on the lines of Sheeva.

“Also on a personal level adding Sheeva for me will remined me of the time I played K.I on the snes with my brother for the very 1st time because he thought K.I was M.K and was like wheres the Girl with the 4 arms so it be good for me personaly if I could convince him to play the current K.I and be like theres that 4 arm girl you were looking for.”

But other then that Sheeva is a good fighter and I think she would fit into the K.I Univers nicely 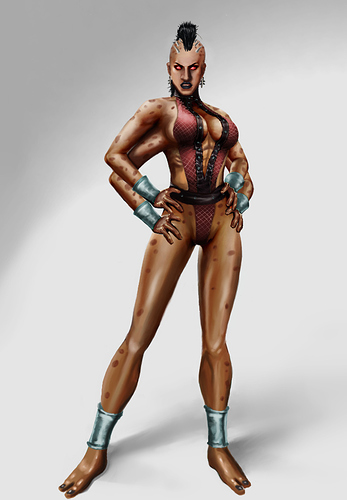 Never going to happen. The cost would be to high

No. Leave MK characters alone. Last thing we need is a complaint thread.

Nope No more guests, but I expect JD to some how end up here, however, at the same time, since the next character is supposed to be “original” that likely means no guests either

MK guest? (Scorpion or Sub Zero no doubt, however MK has a lot of cool characters, specially in MK9 )

The reason we have the guests we do is that they’re all owned by the same parent company (Microsoft). Getting guest characters from the same family of developers is relatively simple and inexpensive.

Getting guests from an unrelated group like Netherrealm (owned by WB) would be a much bigger legal undertaking, and with a franchise ad huge as Mortal Kombat that’s bound to get expensive, even with an ex-Midway guy on the KI team.

I’m not saying its a bad idea to want something. And I hear Ed Boon has expressed at least passing interest in an MK/KI crossover. But it’s not super likely, and probably wouldn’t be happening right now.

Not to add to the negative response but I’d rather see a character from another fighting game, KI was lost in limbo for many years if we used a character from some other game I’d like it to be from a game that hasn’t had much exposure in recent years, like how Rash brought some attention back to Battletoads.

Give me Blizzard from Primal Rage or something crazy and a little obscure like Stun from Bloody Roar, I feel like MK characters are low-hanging fruit. Sure they might fit in with KI’s world but I don’t think they would really be a great choice in the long run. Though that’s personal preference.

I’d rather have a KI character in MK rather than the other way around personally. However I would still love to see scorpion in KI. Just don’t see it happening unfortunately.

I remember both edd and keits have expressed interest on twitter about a swap of some sort. Like a KI character goes to mkX(or maybe injustice considering the seeming lack of dev. Support) and a mk charecter goes to KI.

Although the obvious scorpions and sub zero suggestion are being thrown around here and the interesting monsters suggested I myself would like to see the Aztec God dude from mkx. He was my favorite new charecter and had multiple cool unique gameplay mechanics that would be cool to see in KI. Like his sun burning command grab that gets stronger and longer the more he uses it that also buffs his neutral with mvm speed buffs and etc.

much as I love KI and MK and both being my favorites, IDK about that. Be kind of sad to not have Fulgore in the next KI.

Lol, just what we need, another cameo for MK’s posterboy and another robot in MK.

Seriously though, I’m kinda meh on the matter. I am not for a MK vs KI game unless it’s done with KI’s style instead of MK’s though(violence, not gore). I honestly have 0 interest in seeing KI characters have their anuses pulled out if their mouths or see their faces sliced off and watch their brain slide out.

Pretty sure it wouldn’t be a literal swapping of characters where we’d have Scorpion in KI but not Fulgore and vice versa.

Not sure where you get the whole “an MK guest character is bound to happen” from… no where does it even hint to that being the case what so ever. Having a lot of guest characters doesn’t mean that an MK character is going to join the roster… I can’t even fathom how you see that as logic. XD

Theres no way we have all these guest characters in Killer Instinct and wont be getting a Mortal Kombat guest. It just feels wrong not to have K.I’s Rival game apper as a guest in some way shape or form, so a MK character needs to show up at some point

MKxKI have been a fantasy combination for years.

But I’ll want vs.Soul Calibur. (KI has a good assortment of weapon users)

MKxKI have been a fantasy combination for years.

But I’ll want vs.Soul Calibur. (KI has a good assortment of weapon users)

I’d rathe rnot have them do so simply cause a few KI members have sowrds, How is the game gonna be able to play out?

Theres no way we have all these guest characters in Killer Instinct and wont be getting a Mortal Kombat guest. It just feels wrong not to have K.I’s Rival game apper as a guest in some way shape or form, so a MK character needs to show up at some point

I agree with you. Having an MK character in KI is not the next step, nor nessecary to make the game better.