EDIT: This was posted pre-release so all points are based on the early build of Shadow Lords

Firstly I want to say the fact that the mimic skins even exist is remarkable, I love the idea and its a fantastic way to weave the doppelgangers into the plot without making it overly confusing. I love the green theme, it fits perfectly with Gargos and now all of that green smoke thought the season 3 UI makes perfect sense! Plus the smoke effects look amazing, one small tweak and suddenly they stand out, great idea on that one. Overall mimics are badass!

That being said, I’m seeing a lot of feedback from people on the forums and others online that don’t really like how they look, likening them to “Hulk skins” or trying to say they look like they’ve got hygiene issues due to the green smoke VFX. Personally I love them, for the most part but there are some that could use work. 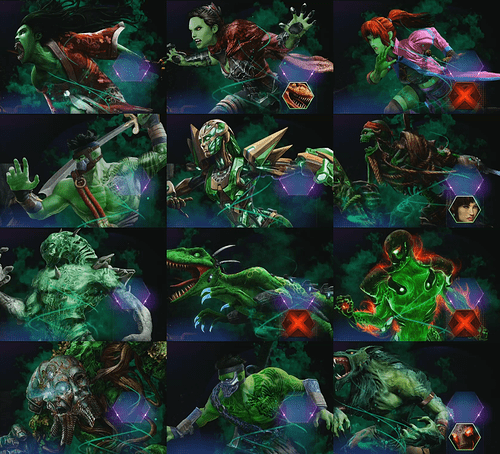 The full-body mimic skins are by far the best. Skins such as Fulgore, Glacius, Sabrewulf & Riptor. Others… not so much. The ones that are wearing their default clothes with green skin look pretty strange, to say the least. I feel like those skins would look a lot cooler if they simply had a complete green set of clothes to match their new skin tone. Kim’s looks particularly garish with the green skin and nearly hot pink costume on top.

Some of the mimic skins are very inconsistent such as ARIA’s skin, her body looks bangin in that gorgeous green and gold skin but her drones are left all alone still wearing the default skin color that magically pops in green when she changes bodies. This is where I get into somewhat of a nitpicky tangent, so beware. Skins like Riptor’s have blue plasma colors all over but the hexagons on her body are green for the sake of consistency the hex spots should be blue I’d think. Fulgore’s blades that are made of the same material are green on his skin for example.

Oddly enough I watched a stream of Shadow Lords and actually noticed a Jago mimic playing a mirror match and he had Jago color 2’s clothes with green skin whereas they normally appropriate color 1’s coloration. I don’t know why this is, maybe a glitch or part of how the skins function but it was noteworthy. Maybe the “shaders” Adam mentioned in the stream a while back are at play here, some form of adding VFX and such to a character like an accessory?

Overall I love them but I’d say some tweaking could really bring them home for the full launch.

One thing I’ve noticed is with the smoke effects a few (not all) of the mimics kinda look like they’re wearing fuzzy pants. Spinal is one that really pops into mind, & I’m sure it’s because he has really thin bony legs (ba-dum ching).

That’s probably exactly why, the smoke seems to be attached to the arms, thighs and chest.

Regarding your comment about Mimic Jago using Color 2, is it possible the Mimic variants are not “Colors” but…well…skins? IG has always mentioned “Unlockable Skins,” I don’t know that they’ve ever used the phrase “Unlockable Mimic Colors.”

Are the Mimic skins more of an accessory, as opposed to a Color? Can we use say…Color 9 with Mimic effects?

I love the mimic colors, but the ones I like less, like the Kim-Wu from the above picture, are at their worst from the art before the match, when fighting its not that big of a deal, her green in her art feels a bit too much Shrek to me, but its also in part to her clothing color. The Mira picture next to her has a lighter shade of green and looks better because of it.

True enough, we don’t know what the shaders are that they mentioned. Maybe we can change the skin tones or the smoke effects on characters as some new accessory to equip.

I have an idea on how to make the mimics more menacing, inspired by the vs art for the Tusk mimic: remove/blacken the eyes. Give them a more frightening, demonic presence to help differentiate them from a regular human.
It’d also look kinda sick.

Yeah a uniformity to the eyes would go a long way to make them look less human and more demonic. Right now they have a little to much expression, if they all had spooky green Shago eyes or black ones like you said it would make them look a little less strange and more alien.

On the subject of the tusk mimic, is anyone bothered by his left shoulder in the vs screen? It has his regular skin tone where his tattoos show for some reason

I hadn’t noticed that but now I’m sure I will. 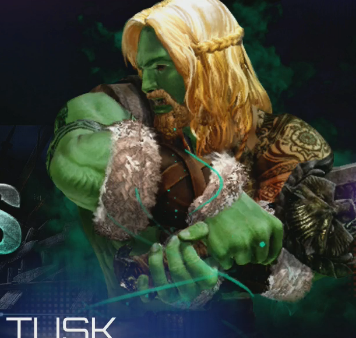 the reason for the P2 colour mimics is because in shadow lords mode it’s possible to have the player use a mimic colour against a real mimic (thus making P1 & P2 identical) so one needs to be altered so the player does not get confused.

Honestly, I don’t like that they’re just flat green with a smoke effect and that’s it. It looks cheap and goofy to me, and too similar to the real character. I want them to look more artificial, inhuman, and astral while still retaining the outline of what they’re copying. Maybe something that more resembles the style of the mimic characters in Smash Bros (with better graphics, obviously): 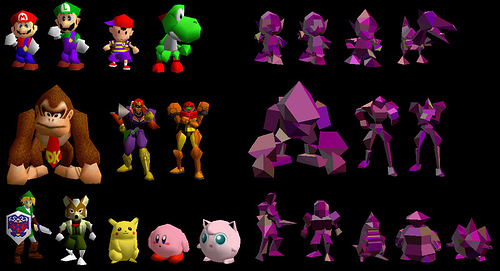 I’d also like them to have some sort of distortion to their voices. I think having some creepy processed voice would also go a fair way toward making them feel more unique.

I didn’t think the mimics will change but I think mimic Wu should have purple hair and Tusk should get black hair. All mimics having white eyes.

I think instead of a green set of clothes, it should be purple. For instance, they could change ARIA’s gold color to purple to go along with the green. Make Mira’s cape purple. Make Shago’s metal accessories purple. It would look really sick.

[quote=“DARKNIGHTSPIDEY, post:14, topic:13996, full:true”]
I think instead of a green set of clothes, it should be purple. For instance, they could change ARIA’s gold color to purple to go along with the green. Make Mira’s cape purple. Make Shago’s metal accessories purple. It would look really sick.
[/quote]Purple for their clothing would be perfect.

Along with changing their eyes would make them look much more menacing. 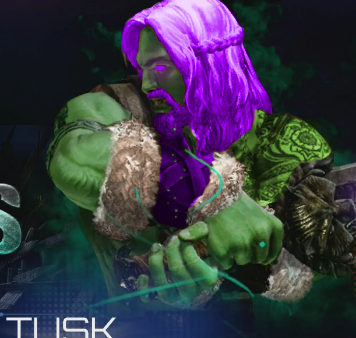 Wow that purple and green really pops I like it.

Also, it would look much better if the flames on the Mimic Cinder were actually red like they are in the VS Art, rather than standard boring fire color.

Or even purple. xP

I’ve been playing all night and now i can’t get these suggestions out of my head.

I’m just curious since I haven’t played much yet. Do the guests appear in the mode as mimics? I would like to see how Arby and RAAM look.