Hype!!! Capcom finally got their heads out of their a** and finally finally gave us Mega freakin Man X. So damn hyped!! If they bring back Zero I don’t know how much more I could take in from this hype train. Who else here is hyped?!

yoo i hope the netcode and gameplay is exciting

I’m not really a fan of Marvel Vs Capcom games. It it’s good news that it will be on all platforms. Let’s hope they go with cross play.

this is a reboot with potentially brand new gameplay. this is the best time to try it out and see if you like it!

Eh, even in the trailer they make the gameplay look the same without showing any gameplay. I will probably still get it because I get every fighter I can, but I’m not going to flip like a lot of people.

Still it’s good for the community and I’m glad a lot of people like it. 8’ equally glad it will be cross platform which finally puts this “no Capcom in Xbox” thing to rest.

I’m furious about this game and don’t want to support it since no xmen or deadpool will be in the game and it’s only MCU marvel characters. So it’s basically avengers vs capcom.

gameplay is being shown tonight. that was only the first cinematic trailer

as @HailFireSpawn mentioned, there will be gameplay footage after Capcom Cup tonight at 6pm pst (in …45 minutes?).

Anyway, stones (gems) broke my heart. As soon as I saw Ryu turn purple, I started crying and getting SFxT flashbacks.

Any speculation as to who that was at the end? I’m thinking it could be sigma or ultron.

real talk i think its probably going to be a unique multiple v-trigger/x-factor-esque mechanic to choose from. im sure they learned from sfxt meme like bad reputation to not go that route again.

Looking forward to it, but even the cinematic shows two types of fighting interactions - beam weapons and quick hit combo into launcher. I’m not confusing this with gameplay but I don’t think they would make a cinematic like this if the game had a significantly different gameplay style.

Marvel, to me, is the opposite design philosophy of KI. There is an extremely high execution barrier to higher level of play, which consists of opening your opponent (preferably through some unblockable assist setup) at which point you enter a character specific launch to juggle to super combo that has strict timing and will take your opponents whole life bar while he steps out for coffee.

Don’t get me wrong, for people who love it it’s great. But you can sit a pair of experienced fighting game players in front of it and unless they play Marvel they will struggle to kill 1/3 of someone’s team before time runs out. And you can’t just figure it out on the fly or “get by” with short combos and raw supers. It just feels like you’re doing it wrong. And it’s really ■■■■■■■ fast. So all things considered I’m not expecting to like this game any better. But I will give it a try.

From what I’m hearing… Gonna be a big disappointment…

Please link videos of the Gameplay announcement! I’ll be working

Please link videos of the Gameplay announcement! I’ll be working

Don’t be sad! I will link video for you!

From what I’m hearing… Gonna be a big disappointment…

It’s not much but I’m turned off as far as hype!

X-men will not return in MvC Infinite because of FOX won’t let them return… I am disappointed too. 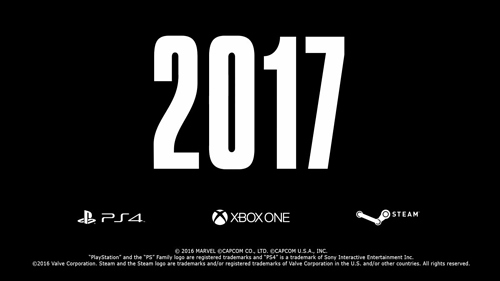 Ehh… I don’t care if it is reboot or not. We finally get new MvC game!

MvC Infinite is not MvC3 anymore. I’m pretty sure MvC Infinite’s gameplay will be like MvC1.

OK, I see that Xbox One symbol down there on the bottom,

That’s good, well all I need is to check out actual gameplay and then I can make a true love or hate comment.

My biggest disappointment truly is the lack of xmen tho, they have some of the best, known, Marvel characters.

I think they said 2v2 with 1 assist, not sure though.

Find out for sure bro, I’m at work, can’t copy paste $hit like I want to on these computer

It’s always fun to watch Max get all excited lol.