It would be nice if there was a mode to master the timing and rules of manual combos like combo breaking training.

Something like the lesson that teach you to do manuals with jago , but in practice dojo, and with any character.

Manuals - the bane of my KI existence - it’s the 1 thing I haven’t been able to master in this game… The timing just seems so strict in most cases… :’(

It’s best to do them after heavy linkers.

unnecessary. Jump into practice and learn the timing.

maybe add the updated manual rules to season 1 dojo in message only. Manuals aren’t hard at all, we dont need a whole mode dedicated to them

If you want to see what manuals look like, your best bet here is to boot up Combo Breaker Training, turn off all auto-doubles on the d u m m y (really? this word is censored??? c’mon forums…), turn on manuals, and turn on only heavy linkers. Then, just watch the AI do random manuals until you get used to the timing.

I’ve already tried practicing manuals in practice mode for HOURS at a time (including your suggestion) and still haven’t been able to consistently land them (and I know the rules to how they work thanks to your guide). Because of this I can’t help but shake the feeling that there’s something I’m missing. After MONTHS of play, I should’ve had it by now.

Can you do light manual after heavy linker reliably?

some manuals are tougher than others and some characters have hard manuals. Who are you using? I find fulgore has hardish manuals but most characters generally have simple enough timing. Try a heavy windkick linker to light manual with jago im sure you will see its not hard at all

I use Aganos - who I’ve been told is extremely easy to manual with. At best, I get them by accident…

i cant confirm that i barely touched aganos but keep in mind some linkers may be harder to manual after. windkicks are good practice

So, my first thought on this: please, don’t make an entire mode dedicated to this.

Not because I don’t think the game should teach you manuals, but because whatever you did with that mode could just be rolled into Practice Mode, so that you could switch on or off your manual training tools alongside the full suite of tools offered in Practice Mode.

Separating out Combo Breaker Training was bad enough. Hell you could probably fit the Dojo into Practice Mode. In both cases it has lead to unnecessary duplication of assets, unnecessary and time-consuming quitting out to the main menu to switch between training features, and walling off features from one mode that can be helpful in another. Combo Breaker Training in particular seems to exist for the sole purpose of filling a quota for “MOAR MODEZ”, apparently a rallying cry of “I’m here for the story” casuals who use the mode tally as a metric for how much there is to “do” in KI in lieu of a more substantial conversation about how content-rich of a gaming experience they’re getting.

tl;dr: when the functionality you’re adding a new mode for could enrich an existing mode instead, adding new modes is probably a terrible idea.

Yeah, I don’t think they’re saying anything about what this mode idea should do. If the mode just puts a dvmmy on auto-block and a message pops up saying “Do into medium kick manual. If the medium kick doesn’t come out, you pressed the button too early; if the dvmmy blocks the medium kick, then you pressed the button too late!”, nobody who’s asking for this mode is going to be satisfied, are they? Maybe they will be if lessons slowly get checked off, or a progress bar fills, and they get an achievement at the end?

I’m going to suggest they actually want this: 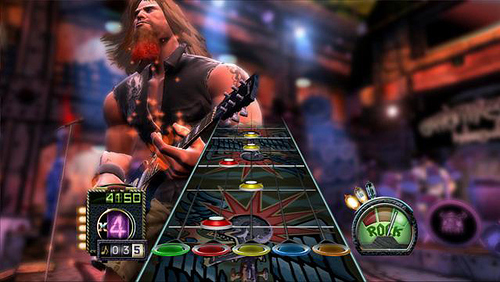 I mean, link combos are Guitar Hero anyway, so why not just add the interface? (Actually, Guitar Hero might be quite a bit deeper as a game experience than link combos…) You use it in your guide in a few places, Infil.

This feature request is kinda subsumed by the request for a Guitar Hero of frame data, which would not only display manual buffer windows, but reversal buffers, cancel buffers, break windows, move startup/active/recovery windows, throw tech windows, invincibility windows…
I have to imagine that the idea has been on the table for long enough that someone over in UI dev at IG has at least sketched some design concepts up for it. It’s obviously not an easy thing to do, but obviously it’d be a pretty big deal if they actually managed to pull it off.

wtf manuals are not hard enough to warrant a guitar hero guide lol. How about we all learn manuals without being held by the hand? god help you people if you ever tried links in sf4

I learned the rules from Infils guide and then just practiced them in training. I master 3 versions for Omen this way. I will say Infils guide , while reading the rules, it can be a bit confusing. Its def not easy.

I find it easiest to do manuals after a shadow linker and then straight in to ender.

This is an unhelpful response. “Anyone having trouble with this is a scrub. Get GUUUD!” Telling someone who’s having trouble with something “what’s the problem, that’s not hard at all! You shouldn’t even need help with this!” isn’t making a positive contribution to the discussion.

Some people have trouble with tight timing - in particular tight timing where there is absolutely zero feedback. Did I hit it early? Late? Who knows. Just keep practicing until you get it at random and hope you can remember the feel. I don’t know why it’s hard to understand why a manual training mode would be appreciated. Yes, something to “hold your hand.” That’s the point of training modes.

I admit, I’m really surprised to hear you say this, especially after you put all that work into your excellent shadow breaker training program. You could always practice against shadow moves by going into practice mode, programming the opponent to hit you with a shadow move and practicing until you got it right. But your training program lets people see the timing, listen to it, and practice it in a specific way that is incredibly helpful. Why could something similar not be done for manuals?

I for one hate manuals. In addition to the fact that I can’t land them consistently, I’m also not sure how they fit in with the game’s two way interaction philosophy. They essentially wreck it - you can’t react to manuals you just have to guess. It just seems like an apology to all the 1-frame link SF players for taking away the advantage they have…

Well, I should clarify; I agree that having timing windows and stuff on screen in training mode could be helpful, but I don’t think it’s in the developer’s plans so I didn’t mention it. By “dojo mode”, I thought they were talking about a text box that pops up, explains manuals, and then makes you do 5 successful manuals before you complete the lesson and get an achievement. This would be “easy” for them to do but certainly not helpful at all for the people in this thread; they already have this mode in its entirety in the regular training mode.

To be honest, I’ve thought about ways I could do manual practice in the browser just like shadow breaking practice. The concepts are very similar (and I have the shadow breaker code written, which I could easily adapt). The problem is, mining the exact data is much harder for linkers due to that hidden “sometimes-5f-but-sometimes-not” input buffer at the end of a linker (I don’t even really know how to go about finding that number per linker without tool assistance). Also, characters have a ton more data I’d have to do, instead of just 2 items on average… they have openers, shadow openers, linkers (3 strengths of each) and shadow linkers, and there’s a non-obvious way to test whether people want to practice linking lights, mediums, or heavies after each (even between moves of the same class, they’ll have different startup values and stuff… blech). And this isn’t even the end of the “problems I’d have to solve” list… so I kinda just stopped thinking about it.

So basically, if I can start a combo with a HK natural disaster (which is hard enough as it is, since it’s easily punishable), then I can use the manual to lock out my opponent for the rest of my combo to maximize my damage or to regain chunks.

Speaking of damage, 1 thing I’m not in the habit of doing is the whole light linker into heavy AD during combos - I’ve been practicing that as well trying to make it a habit.

So going heavy linker into light manual is great for conditioning yourself for the followup linker cancel after the manual as no tot drop the combo but it’s really not that useful without incorporating other manuals or other linkers with manuals. The problem is the reason you typically want to manual is because your opponent is good enough to break heavies and mediums on reaction. The thing is if your opponent is good enough to react to those he/she will likely be able to break your heavy linkers on reaction and also identify that you’re consistently following up with a light linker. In which case I argue personally that you might as well be doing light autos because at least then you’re not risking dropping your combo and they enable you to use light and medium linkers which are not as easy to break as a heavy linker.

I just know personally when I’m in a match with someone identifying how they play I look to see what level of execution they have and quickly identify if they appear to only be able to manual a light attack off of a heavy linker.