Like myself I’m sure a lot of us grew up playing the old games back in the 90’s. One of the big things that really stood out to me the most was Orchid and how promoted she was back then. Regardless of whether or not she was a sex symbol used to advertise the game, I still feel she deserved to have her spot back as the rightful face of KI and get rid of this monopoly of Fulgore being the poster boy of everything.

Here we see Orchid rocking the side of the old KI2 cabinet. 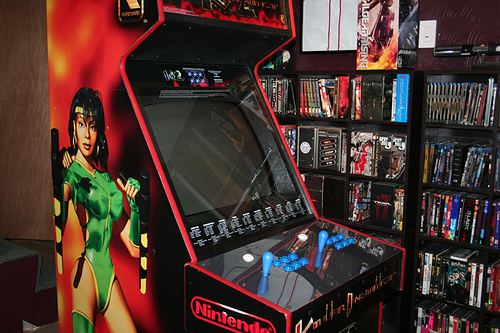 Given Orchid’s backstory she has been trying to take down Ultratech for years and coincidentally enough that’s her win quote during her outro animation. Orchid has always been the true savior of the world and deserves to be more of a focal point not only lore wise but also outside of the game itself as well. We need to get EightySixed to make shirts for her, get that Ultimate Source figure for her out soon, make some stickers and posters for Orchid, and if there is ever a season4 or a sequel she needs to be on the cover and not Jago and Fulgore.

We have seen a lot of female heroins in day like Lara Croft, Joanna Dark, Lightning, Faith, Samus, Peach and many more. Orchid definitely has what it takes to be the next female face of the world like Ryu or Scorpion are to SF and Mortal Kombat.

So whos with me? Who will join me and stop this Fulgore and Jago Monopoly over everything that is KI?
#MakeOrchidGreatAgain

Hmm, nah, I think I’ll take the murder robot or the skeleton.

If we’re going to talk about “stand out” designs, they work much better from an interest perspective, I’d never seen a playable skeleton in a fighting game until Spinal, but I’ve seen plenty of secret agent/military style women.

Orchid is still there from a story perspective, but there are other, more pertinent things happening in the story right now than Orchid “flushing out Ultratech.”

Definitely so when you consider that Ultratech’s CEO is now a playable character and not really the current boss we’re focusing on anymore.

um is it me, or hasnt it always been fulgore

Eh, there really isn’t anything special about her look though. It’s not as fantastical or as eye catching as fulgore or some of the other characters that get used in advertisements for the game (Aganos, cinder, riptor, aria, rash) Unless you want to sexploit her again she isn’t that good for advertising.

#Orchid has never been the “face of KI”.

I think she represented another body part entirely, to be fair…

But, Jago or Fulgore are so much cooler.

Spinal would be awesome too.

I’m a KI3’ Orchid fan.
I truly love her (her face/gameplay/body).

But Fulgore is more significate of what Killer Instinct is: Brutal, Ferocious, futurist and…stylish.

Just like Scorpion is on MK series: Ferocious, Gore and Brutal.
Same for Ryu in SF series: Fist (lol).

Edit: Dunno what people would think if they see a naughty girl on a FG’ jacket lol.
I understand on a Arcade, because we can see directly what it looks like, but on a cardtrige or w/e, it will looks more than another DoA series than KI :D.

Story wise, i agree. At the core of it, Fulgore has always been, frankly, a dumb ■■■ robot.

Now i know the immediate counter-argument will point to the connections between Fulgore and Eagle. Kind of like a ghost in the machine thing. But its got a lot less pull for me in the way the story goes. Plus, that aspect is either retconned, reworked or left up to interpretation. Its never been more than teased.

Orchid has much more interest in carrying a story to me.

Who runs the world GIRLS? Who is running things at your home, prob a female as well. KI is no different. I was MEMARIZED by Orchid when I saw this game back in the arcades in the '90. Back then those pointy totally misformed pair a honks she had were special. I was like Beavis I have seen the top of the mountain…and it’s GOOD!
If it was not for Orchid I would have never understood the female anatomy. That and the fact she could do the longest normal ultra without glitch had me coming back for more. Ever since female characters define a fighting for me. I always try those characters first and usually stay with them. So yeah make Orchid the powerhouse she DESERVES to be. Giev her a fireball and a teleport, 11 random startup grenades and 5 recaps. Let the takeover of the Orchid Express begin and be the FACE of KI 4 Lifeeeeeeee…

If it was not for Orchid I would have never understood the female anothomy.

multiple levels to this

As big as a fan of orchid I am,
I don’t understand the core of this request.

Yes I know she was written as the one who bested eyedol in Ki1, but she kinda has been woven into a more solid roster member rather than a ‘face of KI’

Couldn’t she just be as fabulous as she always has on her own without it being ‘Orchid Instinct’?

With heavyweights like Kim Wu Maya Sadira and Hisako orchid is basically at all of their threat level.

Also, the devs turning her into a psychotic paranoid rebel kinda rules out her being a poster character. I like her being a mystery in that way. Just my opinion.

OH! Then let me explain it to you in as scientific and evidence ladened way as possible.