Look out for my Right Hook - TJ Combo Tech Thread

Reset to flip out, set ups… TJ will demonstrate the true power of his arsenal with this tech.

Do his roll after doing his flipout making it a mixup by quickly switching sides,also you can do a target flipout in the air with lp to lk.To be honest he has more reset potential with the flipout than he did by only having his opponent in the corner from s2.

Apparently TJ can cancel his Back Step (B,F+LK) into Throw during the early frames of the former’s recovery. Nothing too outlandish, but this will surely help improve his tick throw game, nonetheless.

Anybody know any option select setups for TJ?

Interesting stuff bro. Have you tried other normals or is it easier with light punch? Looks useful

The Back Step cancel into throw can be applied to all of TJ’s normal moves, but it will not land successfully due to push back range (notably with medium and heavy attacks) and that the opponent is still in a block-stun state during the setup as well. So far, I was only successful on landing the setup off from the 3rd and 4th hit of his st.LP chain combo.

Show me more about tj… I just picked him up.earlier this week

Although TJ is my Season 2 main, I’m not all that knowledgeable about him, in terms of discovering tech. But despite that, I can still try helping you out on learning the character (who knows, I may learn something new along the way as well).

So, what do you want to know?

I feel smothered when playing with him. What are good normals to use when in neutral. What setups are commonly used to open people up? What should i avoid doing on wakeup? If i take a risk, does he have any moves that i can make safe with a shadow?

I main him and “smothered” is a good way to describe a matchup when the opponent is being aggressive. Either TJ is attacking or he’s in handcuffs in alot ot matches.

“Unstable” would be another appropriate description. Look great one rd, then look terrible in the next. So on and so forth. His wakeup is really bad, and his opponent always gets off before he can, even after whiffs or being blocked with great defense. I have never experienced another character in any fighting game that has almost no ability to turn the tide of a match without losing a life bar/rd.

What are good normals to use when in neutral.

Honestly, I’m still looking into finding effective buttons to utilize in neutral as well. But despite that, I believe these will help you out greatly:

What setups are commonly used to open people up?

From my personal experiences on playing TJ, I mainly go for these setups:

What should i avoid doing on wakeup?

Basically you want to avoid doing anything on wake-up (excluding Shadow Vortex/Cyclone and maybe Instinct Mode). Overall, he has poor start-up on most of his attacks, and it also doesn’t help the fact that he lacks a reversal move. Your best option during situations like that is to remain calm and wait for an opening during your opponent’s pressure.

If i take a risk, does he have any moves that i can make safe with a shadow?

Shadow Powerline is your best (and only) option on making your attack safe on block, since the opponent cannot Shadow Counter said move effectively.

Ok thanks for the information guys… I’ll be in the lab today. I would more than welcome an invite if one of you guys is available. @Eirokaj @oShift2oVet78

Unfortunately due to personal internet issues, I can only play past midnight… but, if you just so happen to be on around that time, then I’d be gladly to get some matches in with you.

My XB1 GT is the same as my handle here, if interested.

Ok that’s kool I’ll add you and when i see you we’ll play a few. Thanks for the help

Finally got Tj to lvl 50 but I can’t say that i’m fully comfortable with him just yet. Does he have any winning match ups? if so what are they? very risky character and I want to find his rewarding play-style. I’ve tried patience with methodical pokes which doesn’t really fair well against the cast. Flip out on my end is still being explored but correct me if i’m wrong but Tj gets broken very easily now.

*Try this. Light tremor from distance for the hard knockdown. Powerline cancel to tremor to bait the dp from the opponent and punish. Condition and then you can command grab from the powerline the next time. Or powerline to roll, grab or shadow uppercut in close or just wait for them to land and punish. The key, for me, is to get that hard knockdown to start. Because TJ doesn’t really have any safe-ish openers or approaches. If necessary, I will sometimes Powerline, cancel and light Tremor just to get the Hard Knock Down (teleporters are a different story, since they’ll start punishing you with a behind teleport on the attempt if they’re smart). Rinse and repeat to get it as well. Really takes your opponent out of rhythm when they’re having to block at range in order to remain on their feet. You can also time your tremor to hit ground as soon as they land on a jump. It stops their aggression or they simply get knocked off their feet. Then go in.

Also, a good and simple reset is to combo, tremor hit, pause (drop your combo), and then command grab.

A BACK DASH to target combo to command grab (or whahtever) is also pretty reliable.

*Another bait, my trade mark, is the hard knock down to roll into a single whiff (intentional) jab to draw the wakeup dp and then Shadow uppercut. This is better than simply moving in and try to bait with a block, because you give your opponent something to look at and they think they’ve got you. Throwing out the dummy jab prior to opponent wake up in close is also very useful in baiting Hisako’s counter, Tusk’s deflect etc.

The most important lesson I’ve learned is to use the power line to cover ground instead of dashing for the most part. Because when you’re dashing TJ really is not on the offense. He is too easy to punish if you try to open somebody up unsafely. He’s a momentum character. You need to get on the safe offense or else you’re going to have a hell of a time getting off of Defense, cause his wakeup is ■■■ and he’s actually a slow poker. You’ll lose the Poke game a lot because you’ll get hit first. TJ’s tremor is not an anti air and is very punishable on block. So I rarely will just throw that out there unless it’s to hit sand and get the Hard Knock Down.

*I just beat your clan member C88 Summerall, who uses Jago, with these strategies.

The following is a match against one of the better TJ players I’ve ever come up against ( I’ve narrowed the skill Gap significantly though). Look how effective that light tremor is from a distance to keep him controlled and allow me to control pace: 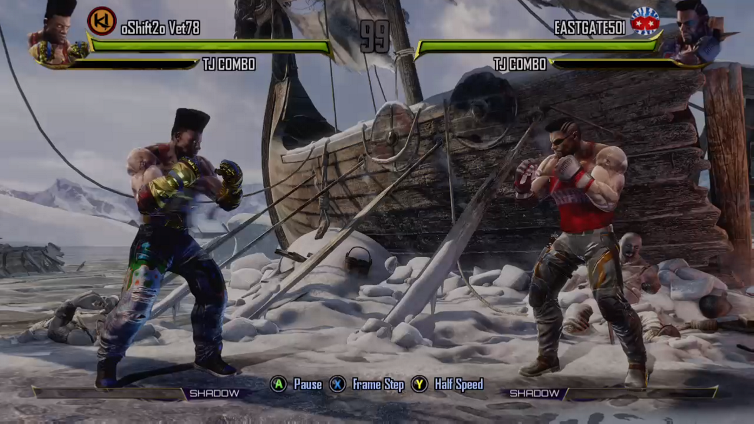 Note that he never uses the light tremor and all of his offense starts with aggressive and somewhat reckless dashing and intimidation tactics. Despite his aggressive style, who is on the defense more here? I’m actually on defense for like 4 seconds of the whole match. Everything else is safe offense and moving in on Hard Knock Downs. After I move in, it’s up to the opponent to try and break my mix up (good luck =)) . But I’d rather much be on the giving end than the receiving.

My philosophy is that TJ is more of a “rush in” character than a “rush down” one like Sabrewulf.

Man good stuff… We need to keep this dialogue going. Im sure its not only benefiting me but many others as well. Also, is it me or does tj have a few bugs concerning his shadow flying knee? On a few occasions i notice it hits once and crosses up the opponent and misses the remaining hits. Anyways, I really appreciate you answering these questions.

Yes. He has bugs. That’s one of them. He also will not auto correct properly on his tremor and/or uppercuts. And it’s ugly as hell when it happens.

Ahh okay well him being the 1st season 2 character. I figured they would’ve had him bug free by now. Guess it slipped thru the cracks nonetheless thanks