So, I understand light DP is supposed to be invincible, but it trades and sometimes even flat out loses surprisingly often. Can anyone explain why light DP trades at both the 15 second mark as well as the 43 second mark?

Your link doesnt work. If your Xbox privacy settings have video sharing to friends only, ect… none of us can see it unless we are logged into Xbox profiles and are firends with you.

BUt anyways…I cant see it when I click the link.

I would like to help but I can’t view the video.

Without a video, it’s very hard to say. But yes, after the invincibility frames run out, DPs can get stuffed in some cases. I think Fulgores light DP isn’t unique and has 2f of invincibility off startup like most in the game. After that, it has upper body invincibility for maybe another 5f or so.

EDIT: @Paramisery, since the clip is not available, can you just say what happened to make the DP lose/trade? Even something like a description of what happened is helpful, ie you DP’ed off your wakeup and it traded with a Kim Wu spaced heavy dragon dance (which is one interaction i know of that can get 3f DP’s to trade). If it’s something wonky, i don’t mind labbing it.

Yeah I’m not that computer savvy, I posted it on facebook and got an answer – but i am curious what you guys have to say too. Is there any way to upload an mp4?

2 interactions with sabrewulf, both different. First one he made me flip out after a juggle and did regular eclipse and I DPed both for a trade. Later, he goes for a running slide, I pop instinct, freezing time, and my DP trades with his slide too.

Ultimate Fans – it sounds like slides beat DP because of how low they are and the fact that DPs are in the air and ground attacks outprioritize air attacks. My light DP lost to Omen’s slide today too. I think the best idea is to just use heavy DP and think of it less as a DP and more as a reactor spin speed builder.

Light DP should beat any slide as far as I know. Medium and heavy can be low crushed.

I used to think that too, do you use this same name on xbox? I can xbox message every clip I record of it trading/losing.

maybe this will work

I’m glad you tried the link again because i was about to write that i had tried to replicate the flipout, eclipse, DP scenario and couldnt find a scenario where DP traded with L Eclipse, it beat it clean. From what i’m seeing in the clip, the Wulf microwalks forward after the flipout and i did not do that during my attempts. I can’t test it right now, but i’m willing to bet that that is the reason why you had the DP trade there. And in the speed of the match, that’s nearly impossible to see. The microwalk put Wulf close enough so that it could trade.

With the slide? Your light DP is a 3f startup and the 1st and 2nd frame, per the frame data guide are invincible. On the 3rd frame is when it becomes active and you are no longer invincible. It’s highly likely that after your invincibility ran out, you traded with Hamstring because the attack was VERY meaty on you after the instinct pop.

You still have the clips, right? Something you can do is rewatch the clips with hitboxes on and check to see if the red boxes of Wulf’s attacks are touching the green boxes of Fulgore in these two scenarios after your invincibility runs out. I know for sure it happens in the latter one but this is my thought as to why L eclipse traded after the flipout.

My light DP lost to Omen’s slide today too. I think the best idea is to just use heavy DP and think of it less as a DP and more as a reactor spin speed builder.

Your light DP is a real, honest to goodness DP, but it’s not a complete get-out-of-jail-free move. The hitbox of the DP goes all the way down to the ground before he gets airborne. If it’s the type of slide setup i’m thinking of where Omen is nearly inside of you before a hit would register, that is VERY meaty and can get traded with.

EDIT: Essentially, this is what’s happening in both instances… 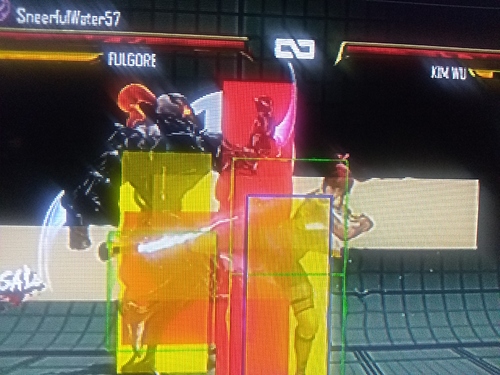 See how Fulgores has no green box on his upper part, but there is one on his lower part? This is right after your DP changes from being fully invincible to upper body invincible. And at this moment, a hitbox is right on top of Fulgore from Kim Wu. Hence, a trade.

It is possible for dp to just straight up trade with special move hitboxes regardless of invincibility. It happens when their active hitbox frames trade with your dp hitbox. It happens a lot with Wulf’s slide.

Just to be clear - in both cases, the DP is trading with Wulf’s attack, not losing, since you’re both getting hit at the same time.

Since your DP’s startup is fully invincible, the Eclipse/slide has nothing to hit until your DP becomes active, which is the case shown here:

If you had done medium/heavy DP, you probably would’ve gotten hit with no trade whatsoever because neither are lower body invincible, so Wulf’s specials would have hit you in the legs during your startup.

If you had done Shadow DP instead, you would have won outright because the priority check would have given ‘grounded Shadow special’ (Shadow DP) > ‘grounded special’ (Eclipse/slide).

The two other dudes above me explained it already, but I had already begun typing, so here we are.

I will watch it again tomorrow after work with the hitboxes on. I appreciate the explanation - as far as you know do other characters trade this often too? I don’t remember this happening back when heavy DP had invincibility. Also, does this mean that if you’ve got the life lead you can meaty a DP if you’re willing to trade damage? That doesn’t seem right.

I think you’re asking if other DP characters have to be concerned about trades. Short answer, it depends. With the Kim Wu example I showed, that only works on 3f DPs. Some DPs in the game have longer periods of invincibility. Say, Kilgore and Cinder for example.

But as far as the life scenario you offered, don’t worry too much about it. In Kim’s case, and I would assume for other cases as well, any trade will result in the DP player staying grounded and put in hitstun and the other player being launched and put through a knockdown.

(Side note, that kinda made me wonder about the explanation you were offered about a DP being airborne. Even if a DP GETS into the air, it starts grounded. If it was considered airborne frame 1, DP into Instinct/shadow cancel would not be a thing in this game.)

Going back to the Kim setup, it’s something I use for a meaty and to chase back dashes. The DP trade is extra, however, its not my intention to trade. In other words, I will never do this with the intention to ‘blow up’ a DP. I’m always getting launched, getting hurt more in the trade, and put in a situation where I have to wakeup. Nothing where it trades with a DP favors me.

@LeoFerreis Sorry dude, you probably could have explained it better than I.

Alright, I need some more clarification – light DP trades at :47 it loses at 2:27 (though it might’ve been late) and loses at 3:05 (this one IMO is egregious). Thoughts?

Pretty much as @SithLordEDP stated, but where he states ‘traded’ i’d place ‘collided’ for my two cents.