Here is an Infographic I made showcasing all characters results in offline tournaments so far in Season3. Perhaps this will peak the interest of some people out there but just had fun making it myself.

This will mostly likely only be viewable on desktop/laptops and not on mobile. 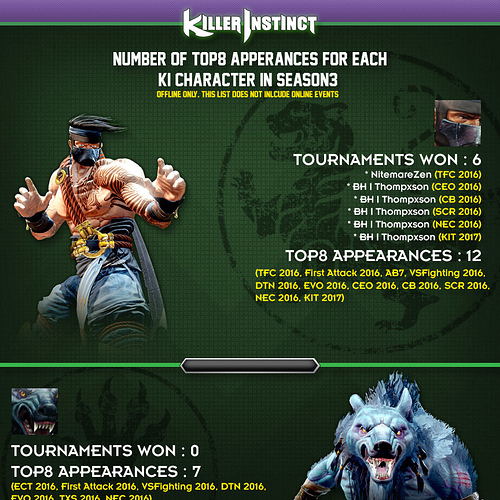 I definitely gound this interesting.

Interesting spread. Jago and Fulgore is basically just Thompson and Nicky, which means those two are ridiculous and it doesn’t really tell me much about the characters themselves. Seems a little strange to give Gargos the Evo 2016 win considering he was used for literally one game for all of Sleep’s run, but how you decide that is up to you.

A little puzzled why you didn’t include more 8BB / KI World Tour online events though. I can see not including every online tournament, but those two in particular seem worth including to me. They’re as hard as pretty much any offline event to win.

The spread is pretty decent, though! The characters used by our best players have more representation (naturally), but pretty much every character has multiple top 8 finishes, and if you had included some of the hard online events, we’d have seen some Raam on the list too.

Didn’t Pink win a tourney with Maya once?

I wanted to include S1 and S2 as well but as you could imagine that undertaking would of been ridiculous which is the main reason I didn’t include online events because there are so many. Perhaps I’ll think about going back and adding in online PL events at least.

I would have enjoyed seeing S1 and S2, but in separate infographics (and then we can manually add the numbers if we were interested). But that’s a lot of work so I don’t expect you to do that.

I think the online PL events are worth adding if you have the time/interest. There aren’t as many this year as there were in S2. The real struggle is probably even finding the results themselves, because they have been so poorly recorded.

At the bottom,you typed Gound instead of Found

Where did that cross armed Mira pose come from?

From the games archives on PC. Some people was able to use the game models to experiment a bit

ha! lol at the nerf jago at the bottom! Do I get a prize for finding that? ha!

Seems a little strange to give Gargos the Evo 2016 win considering he was used for literally one game for all of Sleep’s run, but how you decide that is up to you.

I would like to highlight this. Sleep used mostly Arbiter instead of Gargos, just won the last match with Gargos.

Why does everyone have their symbol in the background except for Eyedol?? This inconsistency bugs me.

It’s a little bit weird but quite nice seeing some of these and going “oh that’s me!”, and it reminded that the Spinal top 8 appearance at KKNL was a bad idea (it was still the height of the cross up bug and I literally used him for 1 match in the entire tournament and regretted it after).

The infographic doesn’t work on mobile in the browser (too tall) but you can download it and view it that way.

While not many had as many wins under their belt as Jago. The fact that I saw Riptor and Cinder and Fulgore each appearing in a top 8 and with a decent number in my opinion; makes me quite happy : D

The top 8 apperances are pretty diverse. I doubt we’d see a roster like this in a Smash game!

It’s a very nicely put together graphic. I agree that in terms of data it would be better to include the online “majors.” If we were really going to analyze the results a bit more information on how you define “appearances” and determine wins when a character is one of several that a player uses on the way to victory would be required.

Also, you should probably change the little text to “nerf Thompxson.”

I came here to say just this.

How do you factor in multi-character people like Sleep, Rico, Bass, etc, who routinely show multiple characters in top 8 and cannot really attribute their wins to one specific character?

Interesting info. I wish it included online events too, though.

Not giving Evo to Arbiter is a crime.

This is very nice, thanks. I’m surprised Hisako didn’t win anything offline, and wasn’t aware Kim Wu did. Interesting

Raam has appeared in a number of 130+ man online tournaments. Don’t know that anyone runs him solo, but quite a few players have him as a secondary and have done well with him even in Top 8.

Hisako has also had appearances as a secondary in offline, in addition to winning and doing well in 8BBD and KIPL’s online. Both Paul B and Seadragon used her to good effect at Evo, for instance. She hasn’t won offline, but she’s been represented. Charbok just recently got 3rd with her in one of the more stacked KI tournaments we’ve seen this year.