I don’t know if any of you guys took the survey for xbox live rewards. But did you guys see the portion where it asks you about games you’re interested in? Games like Sea of Thieves…Crackdown 3…etc… However, one caught my eye, “Killer Instinct 3 (Coming Soon)”, word for word like that. What could this mean?

Edit: This is not an April Fools post, I’m only curious. Here is a screenshot of what I saw in the survey. 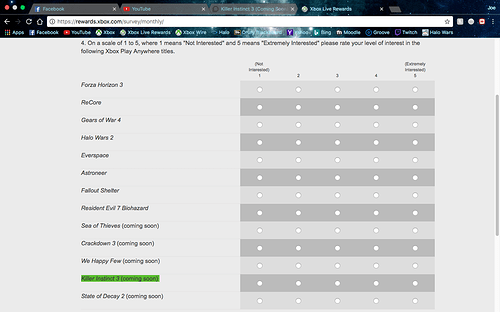 And thus, the April Fools has officially begun on the forums.

No, I’m not kidding dude.

It really just seemed so odd to me, it’d be cool if someone could screenshot that portion for proof.

Any chance at doing the survey to confirm it?

I was about to kick off at this being an April fools joke too but seeing as I regularly do the Xbox rewards survey I thought I’d just log in to see for myself and he’s not lying. It does say killer instinct 3. Which is odd for a number of reasons. I just can’t imagine a sequel being titled 3. It’s not like the 2013 reboot has ever officially been called KI3 either. 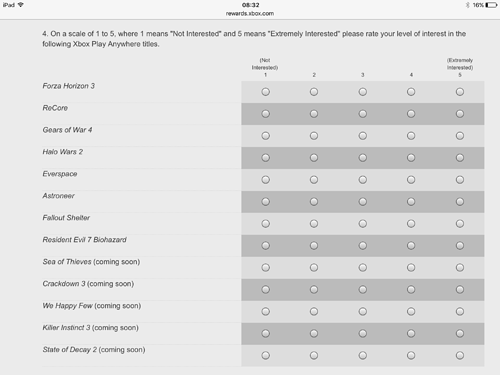 Thank you for actually checking. The timing of this post is awkward, but as you know, the surveys open at the beginning of each month…lol.

I think I saw this earlier perhaps this is an older survey that haven’t been updated but is still active?

Hopefully @rukizzel can shed some light on this for us before we get carried away as to what it could mean.

Either way I voted for KI3 and sea of thieves as my most wanted Xbox play anywhere games on that list.

This is the new survey for April 2017. They open a new survey the 1st of each month.

Personally I’m hoping this is referencing season 4 that will release in fall. Fingers crossed.

It’s just so weird…why would they reference an add on for play anywhere. Considering that the game is already a play anywhere title, I can’t help but speculate hard. New title entirely? I would be so excited.

Bad wording. Who knows who created that survey and whether or not they actually checked titles before inputting them. My guess is it was a reference to Season 3.

What a creative use of words…

I smell something fishy.

Something is not right here.

I swore I saw KI3 pop up before…idk

No idea…I’ve been doing the surveys each month, and I don’t remember seeing it show up before…

Im doing some minor sleuthing around and noticed something.

None of the titles that have “(coming soon)” by them HAVE a release date.

So… I’m wondering if maybe “Killer Instinct 3” Got mistakenly put on that list because instead of being properly labeled as “Not revealed to EXIST yet”, it may have been mistakenly heaped into the list of “Release date not revealed yet”.

That seems like a very likely way that this could have accidentally been leaked.

Something else interesting, The list is ALMOST in chronological order by release. The only thing throwing it off are early-access games, RE7, And the first 2 games.

Now i know that seems like it means nothing, but when you look at the whole picture, the odds of this happening randomly are very unlikely.

If we think of the list as “In order by CONTENT RELEASE DATE” instead of “PHYSICAL release date”, some things even get cleared up. RE7’s next DLC is “Spring 2017”, which explains why it is ranked closest to the “no release date” titles. It also has no release date for its next bit of content, so it appears later on the list.

Now, if we look at it in this manner, and apply this logic to “Killer Instinct 3”, It could mean that “Killer Instinct 3” is on the list to represent the next BATCH OF CONTENT for the game. Season 4, A character, an update, or who knows what else.

I’ll keep searching for hints for a little while longer.