Pretty outlandish thought I know, but what if they actually ran with the idea?

These two little munchkin demons were only assists for Gargos, but what if they had a combined moveset, following align with the fact they’re a team, while also having a similar switch mechanic like ARIA has? Say both have 3x punches and kicks, but can be swapped on the fly for different play styles. (Izzik being a zoner, while Dretch is full rushdown, and each getting 50% health each, representing the two default lifebars) then in Instinct Mode, both are in a combined moveset, where Izzik is all punches and Dretch for kicks. Stage wise, they’d already share Gargos’ Astral Plain since they ARE his minions, but this could also fill the role of the 9th character for S3. And since Omen and Shago lack any real alt costumes, it wouldn’t be too out of place to put them in right into the 5th slot in the 3rd row. (Then moving the Random Select above Shadow Jago in character select)

Would the two lackeys from the final boss be unique to see, or would that be just a silly concept? I know there’s countless archetypes KI has potential for, but thought I’d provide an idea of giving the two henchman a shine in the spotlight.

Also, if they were to go through with this idea, they could be a boss for Shadow Lords mode. Say right before you fight Gargos, the two are sent to fight you first while the master prepares for your arrival, something like that.

Intro: Both jump down from the sky, before stating,
Izzik: "The master will be pleased with our efforts!"
Dretch: (Snarls, then cackles maniacally)

Ending: Portal opens behind them,
Izzik: "We are done here, Dretch."
Dretch: (Looks at screen) “See you in the abyss, losers!” (Cackles as they both walk to the void)

They automatically would be the most broken characters in the game b/c they’re so small, you can’t combo them.

True, but what if they gave them bigger hitboxes despite their stature? Say Hissako’s or Kan-Ra’s for example.

Hurtboxes you mean. And even if they did had that, it doesn’t change the fact that it’ll make the character’s look like they’re hitting thin air. Which can come off as very odd looking. At least with Hisako and Kan-ra it looks like you’re hitting them.

Then I’d main them instantly.

Fair enough. But what if they slightly rescaled them, not drastically, but just enough so they could be balanced? Izzik now same size as Kan-Ra, while Dretch follows suit, that way when fighting they’re more beefed up to fit the scale of other characters, and showing difference between Gargos’ assists and the playable ones. They could even work it as part of their powers, size shifting and manipulation being one of their many demonic specialties.

Not saying they drag and drop the models into the roster, but taking them and building off of what’s been established. Reworking the two little dudes into an average sized tag team is all I’m suggesting. Although I do understand nobody wants another Yoda incident like in Soul Calibur 4.

If anything, I’d make the dual character somewhat akin to the likes of Ferra-Torr from MKX, with Dretch being really big (kind of like that big old red creature seen in the Gears of War 4 trailer) and Izzek on his back with a spear.

They automatically would be the most broken characters in the game b/c they’re so small, you can’t combo them.

True, but what if they gave them bigger hitboxes despite their stature? Say Hissako’s or Kan-Ra’s for example.

Speaking of which, are shorter characters meant to be throw invulnerable by taller characters? Really annoys me that while using glacius, I can’t throw characters like hisako sometimes.

From what I recalled, everyone can be thrown. Large and small

What if they’re crouching?

On instinct mode they summon gargos

Crouching I believe can also be thrown, but I might have to double check on that

Only if they fought with Dretch on top of Izzik’s shoulders.

Like a weird totem pole thing they got going on… lol

That sounds amazing, I want this. Although I’d rather dretch not talk, just snarls.

Now that makes me want a character that’s three goblins standing on each others shoulders named Totem.

Maybe they call them To-Tem-Po

I like the idea of Izzyk and Dretch as playable characters, but if we’re going for a duo as a single character I would rather have the Elric brothers in KI please. 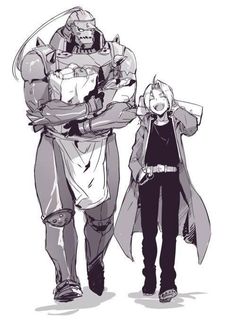 What if they have more abilities than what we’ve seen? What if (& in all honestly I can’t believe I’m referencing this of all things) they were like the aliens in Space Jam, where they can change size, or maybe even merge to form a bigger demon (damn, that’s a Station from Bill & Ted reference…what’s with me?)

But anyway, yeah, something like that? That way it would make sense for them to be diminutive as Gargos’s minions but larger on their own.

That’s reason I’d like to see them slightly rescaled for proper combat, these two are already intimidating despite their limited attacks from Gargos’ assists. But having to fight them both head on, face to face no barriers held, no punches being pulled, who knows what tricks these two have up their sleeves, which is why I think them being together would be an interesting dynamic. ARIA proved a character divided into three can work, take one away and I’m sure result will be just as successful.