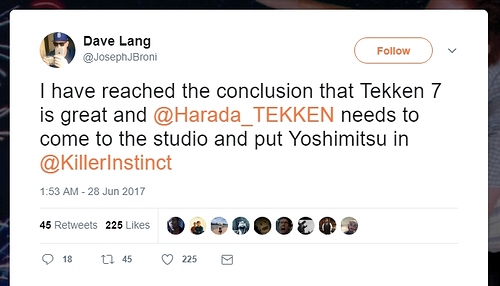 Is it a bad thing that i thought almost immediately that Yoshimitsu fits as good in KI as he does in Tekken?

No, no no. We already have a monster samurai. They blew their load on that one with Shinsako. We need a new character, like a Medusa, if they aren’t going to cap it with Eagle.

This tweet is getting popular on the Xbox one Reddit too, I know it was a joke but I’d love there to be some truth in it. Yoshimitsu is the guest character I’d want more than any other.

We already have a monster samurai. They blew their load on that one with Shinsako

I agree, if IG hadn’t wasted this trope on Shin Hisako, then I’d support this. I love Yoshimitsu and I do think he’d be a good fit for a guest character in KI (unlike the ones we got), but since they decided to make Shin Hisako a thing, I’d rather they kept their focus on new and original characters. Or a sequel. He could be in that one and then not have Shin Hisako.

It’s obviously a joke and poking fun. No need to rush to the forums and debate lol.

Though, Yoshimitsu would be very fun…

We already have a monster samurai.

Can’t even recognize that character lol

As long as Keits doesn’t introduce gems at the same time, I’m okay with this. Very okay actually.

I’m pretty sure if we can have both Jago and Kim as “Asian fighters” or Aria, Fulgore, and Kilgore as robots, it’d be permittable to have Yoshimitsu overlapping Shinsako’s domain.
He’d be a great fit. Sure, add him in.

Who are you and what have you done with Incubus

Answer me! I have a Raam and I’m not afraid to use it!

I was scolded by a mod on here for doing that. So blame them.

Yeah, I could see that happening. To be honest it’s not exactly constructive to put that each and every time a guest is suggested.

I don’t get it. I really don’t. You could complain in a post everytime someone talked about a guest, but the tag line you used was crossing a line?

I am a fan of Tekken and Yosi has been one of my 3 mains for 20 years, but I don’t see how it would work. Akuma is in Tekken and he playes alot different than he does in SF. The inputs for some moves are the same. It is just wierd how some of them work in Tekken.