I just got my TE2 fightstick a few days ago but I’m having trouble learning how to play with it. My issue with it is the button inputs. Does anyone have any suggestions on how I can remap the buttons so that things such as combo breaking, counter breaking and others can be performed?

I’m curious what your current layout is.

The default one is the one I am currently using. But I tried at least 2 or 3 other ones, they didn’t work.

Just stick to the default one, it’s the most logical one, anything else just doesn’t make sense.

Stick to the default. Fight sticks take a while to get used to though…took me 3 or 4 months to get back to where I was before I made the switch.

The default configuration is the best. But you have to remember that you are moving your hands a lot further so you need to do everything a bit faster. Not much, it just takes some getting used to.

Default and 1 month of practice. It will for sure take you one month to get used to it. SO you have to suck it up and dont play online against anyone until your month is up and your ready. Other wise you will get discouraged and give up and go back to the pad.

I tried using a stick years ago and didn’t last the month. I had the special edition SF4 stick and as awesome as it was, I could never get over how the joystick itself didn’t feel smooth at all with its rotations, and I hated that - it would 'bump" into corners as if the base of the stick was standing in a square, making the rotations much harder than they should’ve been IMO. I would’ve preferred the base having a smooth circular motion much like the controllers have currently, or at least an octagonal shape to account for the diagonals and to make rotations a bit smoother.

I eventually gave up on it, sold it for a very good price (it was a collector’s item), and have stuck with a standard-issue controller ever since - ironically enough, it’s with the controller that I’ve been able to consistently place on the leaderboards for many fighting games (including Super Street Fighter 4, Mortal Kombat 9, Injustice: Gods Among Us, and even here on Killer Instinct), so in the end I believe it doesn’t really matte which you prefer - both can work for you so long as you’re willing to put in the effort (and as I said, with the joystick, I wasn’t).

Happen to know what gate you had for the stick? Guessing square.

Overall, square gates are the best for tournament style fighting (lots of low blocks and allows for the quickest but most abrupt diagonal inputs) but for those that played a lot of N.American arcades or pad, the circle gate is the only way to go.

The nice middle is the octal gate but it isn’t smooth.

I have all 3 and the square makes the most reliable one to slam DP’s, dashes and blocks but fireballs/windkicks take a smoothness beating. I can’t imagine how old Zangief’s Atomic Buster ever was executed on square, but it is!

Upping the stick’s spring is also a must for dashes, IMO of course. Getting that stick to reset to neutral quicker on its own allows you to tap it where you want, not throw it as is needed with most default .5-1lb loaded springs. Minimal 2lb.

I swapped my buttons around as you can see by my colours: 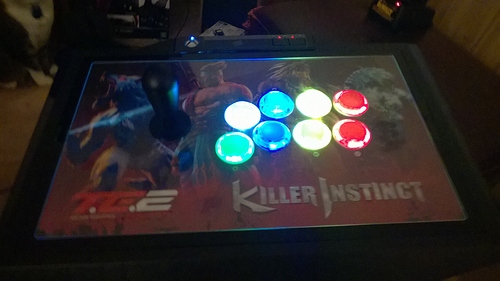 White is Taunt, green is currently x3P/x3K but I don’t use it for that. Colour coded the inputs as intended on KI/SF.

Interesting. I know a few people who have swapped out the square gate for octagonals specifically to help with DP motions. I’d be curious if anyone else feels the same that square is the best for that - I’ve thought about switching mine out for an octagonal one a few times, but have never taken the time. I still have issues consistently getting DP’s on one side, but just figured it was, like so many things with fight sticks, just a matter of getting used to it…

Upping the stick’s spring is also a must for dashes, IMO of course. Getting that stick to reset to neutral quicker on its own allows you to tap it where you want, not throw it as is needed with most default .5-1lb loaded springs. Minimal 2lb.

Now this is something I’ve never thought of, but makes a lot of sense. I’ve always thought that dashes were waaaay less consistent or mashable on stick compared to pad, but just because of its design figured that was pretty much guaranteed. Any other stick players out there that have swapped springs like this? Is this a pretty common modification?

“Stick” with it!!! You wont regret it once you “get the feel for it”

This is good advice. I’ll be honest. When I was getting into this game, I was more use to using a stick than I was pad. But when I stuck with the pad for a good week, I got use to everything I needed to and felt as if I didn’t really need a stick anymore for this game. I’m playing SFV right now and I noticed that my skills at using pad have greatly increased as well. Stick with it and you will learn.

I personally ca never see myself doing well with a fight stick. but then aain I’m just use to using a controller.

I have both, Square and octagonal…I prefer the square gate. Its just easier…but honestly its all about what you use the most and get comfortable with.

As long as you put in the time and effort…you can play just about on anything.

For me the pad limited my ability to do moves such as wind kick, laser, ect…consistently. And on KI2 with the half circle motions…OMG… those are super hard to do with a pad!

When i first got my fight stick, I was so excited… i plugged it in and I totally sucked at it! I was worried! Then my 2nd fight stick came in (My custom Omen) and I still wasn’t good at using it. Here i was spent 600$ on 2 fight sticks and I sucked at them! SO i just kept at it…and after 1 month i finally had it down. But for a minute I almost gave up!

SO glad I didnt… its worth it in the end! and the fight stick is so much more fun as you can personalize it, and continue to change the art work,e ct…

Stick with it. It took me about 3 weeks to get used to mine!

Lol. Yeah, I’ve used my TE2 at this point to where I’m pretty happy with it, and prefer it to pad just b/c all the buttons are more accessible. Only thing that annoys me is the dashing thing (a stick will never be faster than a d-pad or hitbox on that I feel) and the shoryuken motion. The latter is still a thing more just b/c none of my characters actually use the motion, so haven’t had occasion to practice it all that much. I know exactly the feeling you were talking about though, when I’d first bought it and sucked with it. I was quite the sad panda

I grew up playing on pad though, so to be honest I’m still a fan of them. Playing the SFV beta (where my XBox One TE2 doesn’t work with Windows 10

) has reminded me of how much I prefer the direction input side of them. If I’d had more patience it may have been better to simply wait for a fight pad with 6 buttons on the face.

It won’t be too much trouble for me once they release the new Xbox One Eilte controller with the paddles. I’ll be using those bad boys in place of the bumpers and triggers (and will likely use those for double-button inputs, like with throws, combo-breakers and counter-breakers, and maybe even to taunt.

I’m a stick player, but the Elite controller’s ability to shorten the throw on the triggers actually makes it a decent gamepad for fighters, in my opinion. All the paddles etc. don’t appeal to me - but to each his own.

Any other stick players out there that have swapped springs like this?

Yes sir, yes sir I have! I ordered some 2lb springs from Focus Attack, and I now have them installed in both my TE2 and by Qanba Q1 (though I swapped out the joystick entirely on that one in favor of a Sanwa JLF; I don’t want to confuse anyone thinking I dropped a new spring in the Qanba stick).

I wasn’t sure at first, but I decided I was going to stick it out and see if I adjusted to it.

By golly, my friend, I did and it’s amazing. To be honest, I think that 1.5lbs is probably sufficient, and I may end up trimming a small bit off of my spring to bring it down to the 1.8lb(ish) range…

But for comparison’s sake, this weekend, I was playing the SFV Beta on a Hori stick (their $150 PS4 stick). If I am not mistaken, the tension on that stock spring is 0.9lbs or so, and I was REALLY missing the increased tension. Most especially for dashes (I barely dashed at all this weekend) and DP motions (the increased tension makes these feel tighter/more defined).

I think the stock spring tension in the Sanwa JLF (which is what comes stock on the TE2) is around 0.8lbs or so, maybe slightly more. If you want to give this a shot, I would suggest 1.5lbs or maybe a little more. If you can’t find a 1.5lb spring, and you’re only able to find a 2lb spring, give it a go at 2lbs and if after a few days you feel it’s too tight, just trim a little bit off and that should bring you closer to something comfortable. Another option is to combine 2 of the stock JLF springs to double that tension (would bring you to about 1.6 - 1.8lbs)… if you happen to have one lying around. If you don’t, I do, and I’d be happy to send them to ya

There’s some great Youtube videos on the stick mod, I’ll link some if you (or anyone else) is interested!

There’s some great Youtube videos on the stick mod, I’ll link some if you (or anyone else) is interested!

I am, so please do