The dual-handed sword is more than just a simple weapon, display the tech here.

Welcome to the Tusk Tech thread. Here we can compile all of our dirty tricks. I’ll be linking to the info from the other threads in here as well.

I’d like to start things off by congratulating all you Tusk players for becoming immune to Shadow Counters while in Instinct mode!
(special moves only)

You can use any special or shadow move while on the ground this way, so bait out those Shadow Counters!
(In fact, I could see this getting nerfed to the ground, so I recommend enjoying it while you can)

If you have meter, use always option 2 if you are in range. One manual, conqueror ender, 50% health damage
[/quote][quote=“TrustfulWhale, post:10, topic:7292, full:true”]
Here’s some fun devastation I found with linking staggers:

updated chart (I have not included immortal spirit because it does not stagger, the chart is only for staggers into staggers) 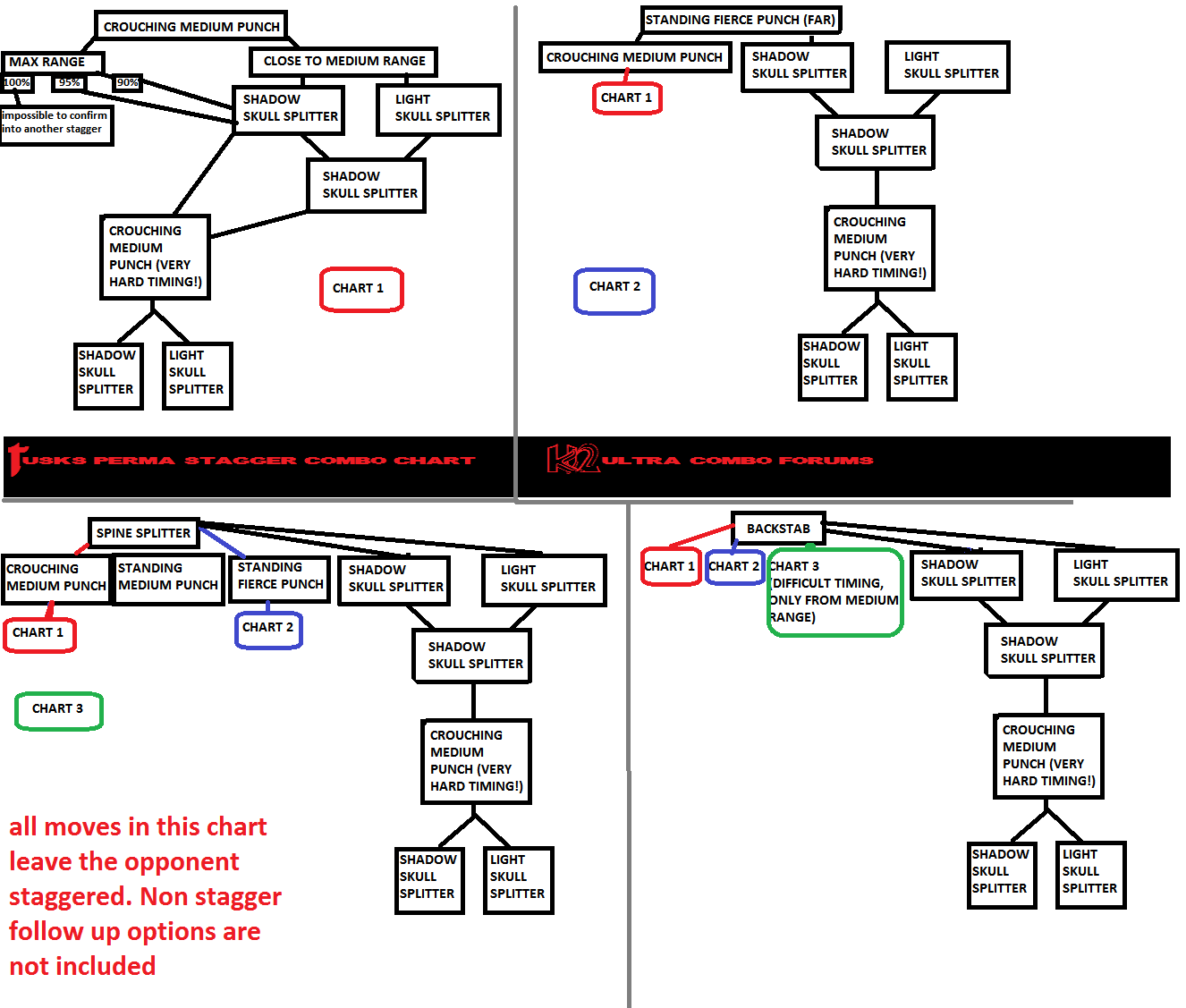 Something I just found: Tusk can perform a 43% damage unbreakable.

Skewer is breakable but the damage is already done

I tested against cpu and while not breakable, the grab can be teched.

Anyways, if the grab is not teched and you counterbreak successfully after skewer, the damage is 98%:

98% damage in a one chance to break

43% unbreakable in case they don’t take the cb bait

Posted this in the other thread, but since this is the stagger thread:

When Tusk deflects an opponent, the resulting combo is stronger than the same move on counter hit:
EDIT: When deflecting an opponent, the deflect attack itself counts as an opener, so I’m afraid I’ve lied to you all.
I’ve revised the below list accordingly.
DOUBLE EDIT: So now I’ve learned that deflecting an airborne opponent does not count as an opener, only grounded opponents.

All of these are one chance breaks except for the deflect combos labeled as 2 chance, can be done anywhere, and deflect recaptures so it’s anti-air OK.
** IF you end up recapturing an airborne opponent with a deflect, the 2-chance break combos become 1-chance break combos. Because reasons.

All of this makes sense considering s.HP is pretty much “The Money Shot” so it would have to be real punishable on misuse.
Inversely I’ve been able to react deflect a number of attacks using it, like Rash’s wrecking ball, pretty consistently.

Also, Tusk can block low for any of Hisako’s rekkas:

I’m really liking that there’s so far a lot of cool ways to set up a deflect by using the opponent’s momentum against themselves. There’s too much to test.

Based on 200 or so matches with Tusk so far, you pretty much shouldn’t be using s.HP unless to chase bad positioning or if you’re going for a deflect. Deflecting with s.HP instantly makes your combo lvl 3.

I just noticed this comment and I can’t disagree more.
Cr.MP is Tusk’s most reliable deflect while under pressure that can lead to a grounded combo since it doesn’t change to a proximity normal when someone is in your face or above you, and recaptures if they were. Cr.HP can deflect anything that cr.MP can, but it can only lead to juggles and those require Instinct.

I’ll be honest, I use crouching HP more often than I DP for anti-airs. Easier input for similar results? Sign me right up!
And I’m not sure if these match Infil’s guide, but I’ve figured out some gold counter breaker combos
(note; use heavy kick doubles, they’re faster)

Of course, you can take it even further if your opponent tries a last minute break on the last 2 breakable hits of Web of Death for whatever reason and get a timing lockout (happens more often than you’d think). That’s how I go through the roof with damage and start eating entire life bars.

The best I’ve done with Tusk (in training mode) is 95% without counter breaker, but a counter-breaker on that last skewer should easily do the trick past 100% damage ^^

The thing is, during that combo, there are plenty of breakable opportunity.

And you’re at 95% damage combo. But like I said, it’s easily breakable, espacialy on those auto HK, so you can mix them with manuals (HK or MK). Also if your opponent have the right timing to break those shadow Skull splitter, you also can counter-break them…
I’ve never done it in a real fight, but it’s more because of that first Backstab.

vs Arbiter
Sticky Bomb: You didn’t ask, but I think all Tusk players should know this.
When stuck, Arbiter will usually start moving in on you with an attempt to launch you in some way, meaning he’s likely to be pressing buttons since he thinks you’re scared of the bomb (and he’s not exactly wrong).

A choice Conqueror into the ground bounce followup will give you enough time to block the explosion while simultaneously recapturing Arbiter with his own bomb, which I’ll admit gives me a half-chub every time I manage to convert off this. Sometimes they break the follow up, but that’s fine since the bomb threat will be over either way.

I’ll just be taking note of that there tidbit, thank-ya kindly.

This is all very good information.

I want to add that his Instinct is amazing for this anti counter breaker. You can actually interrupt your own shadows using the special cancel feature, so there’s some extra bait tech to consider there. I’ve put together a couple videos that I need to edit down. As soon as I have done so I will share here and with the Facebook group.

Also, does anyone know which attack has the quickest and longest deflect window?

Great work so far, everyone.

Great Stuff! I’ll take this all in to Practice mode and go to work…

Oh hey! Yeah we played 3 matches. 2 to 1 in your favor. Lol. I remember quite well. I have NO idea how to deal with Hisako yet and I don’t get a whole lot of time to play right now. But I’m working on it!lol

That MU is a tough one for Tusk, to be sure.

Feel free to add me and we can run sets sometime!

Been working on a couple of juggles. Here’s a couple worth taking a look at. There’s a LOT more potential with juggles. Particularly when in instinct.

Neither of these combos are maximized. I’m just scratching the surface. But his Instinct cancel capability is really enticing.

Ok so I’ve been able to play a bit this weekend. Here’s some stuff that I’ve noticed with Tusk.

His speed is his biggest obstacle. Once your opponent learns your sword normals range and that you can jump punish most if not all of them.

His cr.Med is actually quite good, it’s something I need to utilize more as a footsie tool.

St.HK is one of his essential attacks in connecting after a successful stagger. Also his Immortal Spirit into Shoulder is a go to opener (also after a stagger).

Shoulder is actually a good thing to use close range as it’s entirely safe on block. It’s a fake frame trap too if you think you can catch your opponent with it.

His instinct is really good, but it sucks that it costs to use that cancel. Otherwise it’s quite good. There’s so much to experiment with.

His footsie hit confirm almost always needs to be normal > Skull Splitter. This is safe, at a good range to establish a good mix up game and during instinct can be cancelled into Immortal Spirit into grab/low/overhead mixup.

Speaking of his overhead… Hard to find a LOT of use. But you can do lt. Immortal Spirit into HP/HK almost right away and it covers 2/3’s of the screen or so. It’s also safe on block at full range. It’s just super slow on startup, so I only use it when I can’t be consistently interrupted or when I’m mixing up my rushdown with instinct.

His Immortal Spirit in general is probably his most effective command move. Just because of how quick it is and it has no cool down on whiff. You can block pretty much immediately after and if you time it you can get an extra long footsies out of it.

thanks, I’ll try this.

Played another Tusk online and found him relying on the OH/Low mixup after Immortal Spirit. Pretty bad idea. I figured it was easily fuzzyable from the way it looked, but now having played against another Tusk in a real match I fully understand that the OH is just noooot going to open anyone up,.

Not to say the Immortal Spirit isn’t good, just that the OH option, as far as it’s mixup functionality is concerned, is super-meh. Immortal Spirit remains excellent because it’s super low recovery allows for a bunch of throws, tricky f+s.MP crossups on whiff, and of course just doing a shoulder out of it to stuff opponents trying to counter either of those options.

Yeah I mostly stick to using the OH for max range pokes out of the dash if I suspect a button press or fireball startup. It also seems good for predicting jumps sometimes, otherwise I hardly use it.

Yeah the overhead is not crazy useful. As an overhead anyhow. But it works great as a max range poke for sure.

Thanks for the tips especially the setups. Tusk was always one of my favorites that i mained in KI2/Gold.

Even though I’m working on improving my Tusk, I need to play some good Tusk players as well. If it’s not a problem, I would love to get some sets going. I can add you guys or feel free to add me.

Same for me, I really want to improve my game.

Is there already some crazy Tusk guy that I could watch on Youtube/twitch anywhere?

Give it time. The tournaments haven’t happened yet.