I'm sick of all this hate in the gaming community

Kinda sad to see that another person left dere, this cult just enjoys telling people to don’t come back like if they own the place or the forum dere. I just wish some of ya would just let others be themselves and not just another number to this cult. you understand,

That guy was a sad and strange person.

Oh no, why did Geek get banned?

Take it away LTG 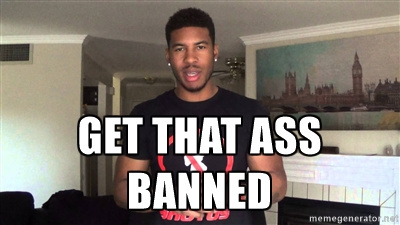 Dude just leave. You offered no constructive criticism on what would make Ki or any of rare’s old ip’s better in other hands. You offered no proof that it would be better with someone else at the helm. And now you have the gall to change the OP so it doesn’t look like your original topic was complete bullocks to begin with.

most kids gaming nothing know about ex-rare killer instinct…

Odds are you are one of them. Some kid who watched their favorite youtuber play Banjo, rant about how great it was, and then saw how cool yooka laylee looks and decided to bash microsoft because they haven’t put anything from rares ips out besides KI recently.

If you are so done with this community, then just leave.

“I’m done with this KI community”

Um, how many are there that would respond to such negativity?

this community so idiot like must be 12 years old.

I only know of one 12 year old that is on the forums, and not that often…my oldest son. Yup 36 year old here…soon to be 37 actually (wow, I’m old).
I played KI 1 to death on the SNES back when I was a teen, but there’s no nostalgia goggles here. KI1 is barely playable compared to KI3.

And besides that, a good deal of the OG KI crew have helped to make this KI. So I’m pretty sure if the Playtonic guys were to get KI, nothing would change.

And besides that, a good deal of the OG KI crew have helped to make this KI.

Dude we got the OG of OG’s Ken Lobb! So nice, he worked on KI thrice, and voiced Thunder in the current game.

I’m here to see the cult members tell others to leave like if they own the forums.

I don’t want them to leave, they always give a chuckle whenever I see them use opinions like they were facts and proclaim that KI is dead yet it’s still going. People have literally been saying since season 1 “KI is dead” and I’m still waiting for that to happen.

It never stopped being great. It only got better, because it’s still standing after all these years.

@moderators I think it’s clear what we are seeing here.

Cool. No one asked.

The thing is… KI won’t be as great as we all want it to be. Lets face it, the PG style ultimate sucks, who does IG think are playing this game little kids and virgins with light violence experience in video games?. I really don’t get why IG giving us ultimates that won’t show a decent scene of gore. There is barely anyone online, when you look for a lobby and you come across one person in that room you don’t want to play or be in the same room; you exit out and search for a lobby, the same room with the same persons are shown after you search for another room. Another thing that made me cringe hard in season 3 was the lie IG said about shadow lords being the cinematic story mode of season 3, and the game being milked with lame content like mimic, shadow and gold skin. This KI is almost dead in my opinion, and I blame Ken lobb, IG and microsoft who has an issue with fan service unless it’s the males characters showing skin.

Why are you snitching dude?