I'm a little worried about the PC launch

I’ve been waiting to get into KI for a long time, crossing my fingers that a PC version would be released. I’m super happy that they decided to make a PC port so people like me can finally have the chance to play the game without spending hundreds of dollars on a new machine then a $60 annual fee to play online.

On today’s stream they finally showed some PC gameplay, which was really cool. But after seeing it, it has me worried about a couple things:

Again, I’m really glad that they decided to do the PC version. I just really hope that the launch won’t be lackluster on the PC side of things, since it could put off a lot of PC players from getting into the game. I know that even if it does launch with some issues that they will most likely be fixed within a few weeks afterwards, but still, it has be worried non-the-less.

EDIT: After all the replies I’ve gotten (even one from @rukizzel) I’m WAY less worried about the KI launch on PC. So I just wanted to let anyone new to the thread know this right off the bat.

Steaming at 1080p would have contributed a lot to fps drops. Crashes were worrying, we’ll see.

True. Playing at 4K while steaming at 1080p at the same time WOULD cause some noticeable frame-drops. The other things have still got me worried, though.

rukizzel did say that he sideloaded the non final build of the game and the frame drops were due to the streaming.
the game looked great and smooth for the most part.

I guess we really just have to wait and see…

Another thing that worried me: The fact that it took them so long to show off the PC version. Other than the Windows Event they went to (and there’s SOME footage of that floating around), they never showed off the PC version until today… 2 days before launch.

I guess they didnt show it because it wasnt really ready to be shown, rukizzel mentioned something about it being finished before the weekend and that he was playing a non final build that was sideloaded. but yes we will have to wait and see.

Have faith. The guys at Iron Galaxy take pride in what they do.

I know that. But porting the game to a new platform isn’t the same as making a new character or something. And to be fair, Iron Galaxy did port Batman: Arkham Knight on PC and just look at how that turned out…

I know that isn’t a completely fair comparison since I don’t think the KI team had anything to do with that, but still.

Maybe they didn’t show it because they wanted to make sur eit was as good as possible? so they spent time developing it.

So, help me out here. You’ve posted that you are worried, based on a few things you saw on the stream. A couple of people posted explanations of that and you keep responding with “I guess we will have to see.” When you posted, what was the response you were looking for?

I’ve only responded one time with “I guess we will have to see.” – I haven’t kept doing anything. As for the explanations people have offered me, there have only been two:

Steaming at 1080p would have contributed a lot to fps drops.

rukizzel did say that he sideloaded the non final build of the game and the frame drops were due to the streaming.

As for things the response I was looking for, nothing in particular. I was just sharing my thoughts and fears with the rest of the Forum members. You know, kinda like “General Discussion”…

I’m thinking that PC gameplay will depend heavily on the end users setup, Internet connection, and strength of that bandwidth, am I correct, just like the Xbox-

The ones that run into problems may blame any connection problems on the game, but it should rely on sub-level attachments.

I’m hoping that the PC users will have a great cross play experience,

I am personally staying away from multiplayer so I can enjoy KI season 3 to myself, I can imagine some are hungry for their rank increase and whatnot,
I definitely will go into SHADOW to fight new Kim users

Anyone happen to have a link for the PC gameplay ?

The crashes only occurred directly after they changed the graphics settings, I have known many PC games that have done stuff this(or just lagged really bad after changing graphics).

Yes they have medium settings I saw them a couple times while they were tweaking the options.

The game crashed multiple times while they were playing. It seems to have crashed on the loading screens every time.

The game also crashed several times during Xbox One streams so this could be a bigger problem than just the PC port.

While going through the options, I didn’t see any Medium settings for Texture quality and stuff. Just “Low” and “High”. This could be because of the way he was cycling through it (press back on Low to skip to High, for an example), but we don’t know for sure. Is KI going to launch without Med settings?

It’s just names. The game seems very light on requirements so even if that’s the case I find it very hard that the game actually needs more than one or two of these settings at low (together with a lower resolution) to play well.

Speaking of quality, the lowest settings still makes to game look good. Like way better than I imagined. Which is a good thing!.. Kinda. On one hand, it’s good the game will look great no matter what settings you are playing on. On the other, this means the required hardware to play the game is going to be higher.

These minimum specs say to me the game will run on pretty much any respectable rig. Actually buying the minimum spec PC might be cheaper than buying an Xbox One outside of a deal.

The game wasn’t able to handle 4K on a GTX 980Ti. They would get major frame-drops and they even didn’t pass the performance test in-game.

While streaming. Without streaming I believe the game will fare better.

I was very optimistic on that stream, it seems the game is very light on specs and most people will be able to play it and still see pretty graphics. That’s way better than a certain other FG that was just released.

Couldn’t find it . Appreciate it though

They only have the Season 3 exhibitions.

The game wasn’t able to handle 4K on a GTX 980Ti. They would get major frame-drops and they even didn’t pass the performance test in-game.

This is the one that worried me most, and the reason we nearly didn’t stream the PC version. I was using the same machine to stream and play the game, and on my end it was flawless. Absolutely flawless. However trying to get that signal out to you was the pain point.

Once we turned off streaming the performance test results went waaaay differently. 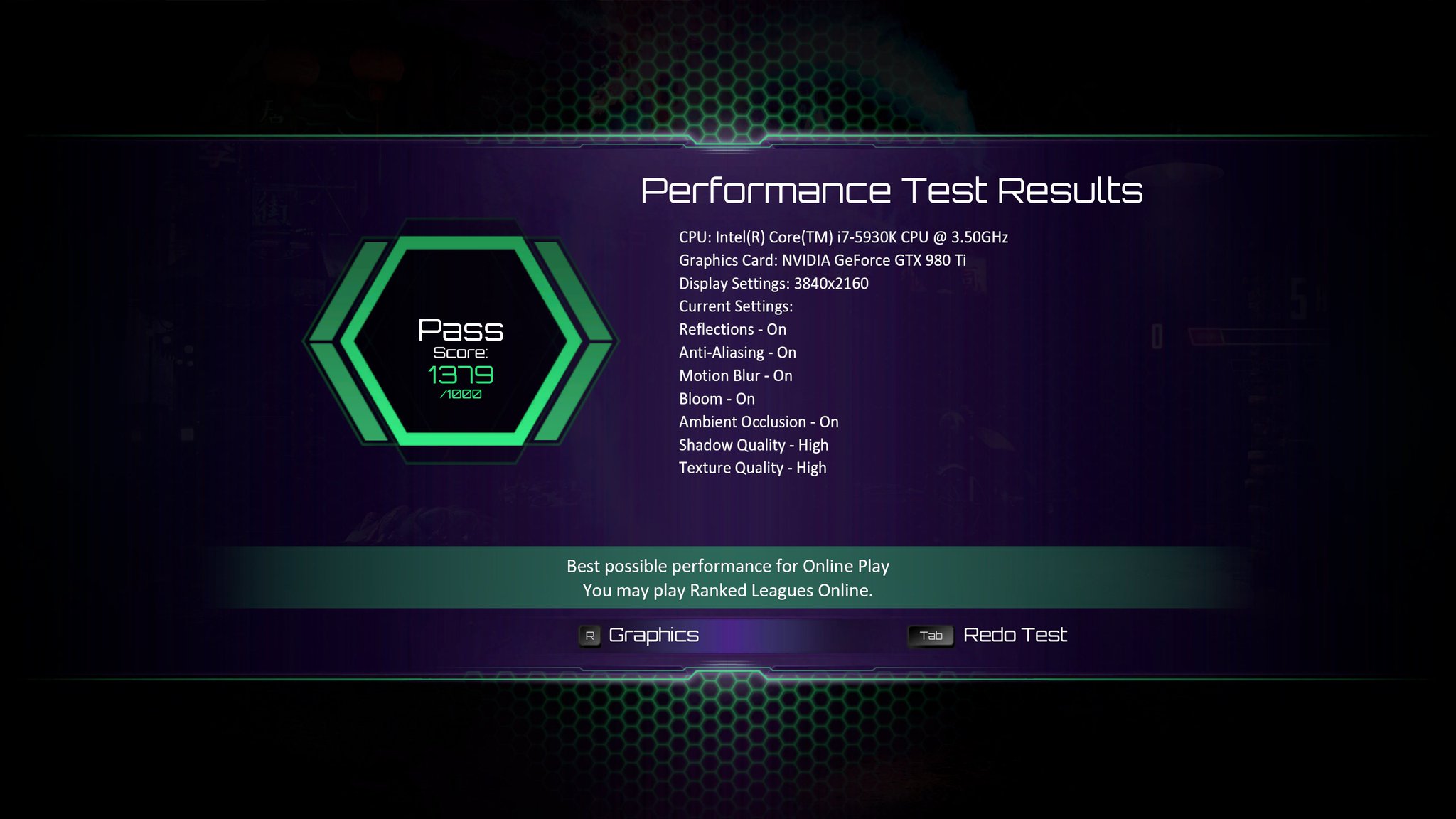 FYI Killer Instinct fam: here's my perf when NOT streaming from the same machine at the same time! @usmc_rotendo

Oh, and we saw 0 frame drops on any setting. That’s a symptom of viewing a stream, not the actual gameplay.

Well that is understandable when doing such things as streaming and gaming on the same machine, frame drops are expected. But glad to know the game runs flawlessly. I wish it was out already.