If you are having trouble downloading the PC version, come here

I wanted to give this a little more visibility in one bucket thread as I’ve been seeing people having trouble in various threads. (mods, if I’m only adding to the bloat please destroy this thread)

If you cannot download the app from the Windows store and it’s showing you a greyed out “Free+” button (see picture), a solution for a number of us has been to sign out of your accounts and sign back in, this should make the button usable for you. 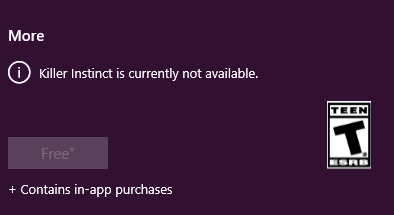 Other users have had issues with their version of Windows, to which I refer you to rukizzel’s post:

If you’re having trouble downloading, here’s how to check what version of Windows 10 your PC is running and how to update to the latest:

In response to Windows 10 version issues, here’s some helpful information:

Killer Instinct requires Windows 10 Version 1511 to run. You can check which version of Windows 10 you have installed by typing “winver” into the Run dialogue or in Cortana’s search box. If the window that comes up doesn’t say “Windows 10 Version 1511” followed by the build number, then you need to update before you can install KI.

The issue I ran into, however, was that Windows Update was not pulling any new updates for my computer - and as it turns out, the installed build of Windows 10 was from July of last year. Yikes.

After making sure that your Windows Update settings are correct (e.g. you’re not opting to defer updates, etc.) and that you have no other options, the way to fix this is by backing up your important files first, as always, then running the Windows 10 Media Creation Tool (available HERE) and selecting to upgrade this computer. Once the media download and download of its updates finishes, it will begin to install the newer version of Windows 10. This process will take a while, and while the update is being applied, you will not be able to use your computer, so plan accordingly.

Once the process has finished (which can easily take a couple of hours), you’ll have upgraded your Windows 10 installation to the most recent public release, and should be able to install KI without any more Windows Update-related issues. In some cases, it may fix a few other problems, too.

Hope that helps anyone that may have this issue.

PC master race! I just switch on my XB1 and play the game no hassle involved. I guess that’s why I’m not part of the masterrace…lol

For some reason the Media Creation Tool says it can’t upgrade my OS. I’m on version 10240 of Windows 10 Education.

Windows 10 Education is a variant of Windows 10 Enterprise, and is therefore not supported by the Media Creation Tool, as specified in the table in the given link.

A solution to the problem is to check for updates manually. Start Menu, Settings, Updates, Check for Updates. Your version of the Windows Store may be outdated, let it download all that stuff.

Hey there, sorry if this isn’t the right place to be asking around, but I am having a major major issue with windows 10 KI launch. Alright, so My specs are above the minimum but a little lower than recommended, I noticed the game was running so slowly, I couldn’t connect any kind of combos or anything. I minimized the settings as far as I could and it was still running half-assed, so I tried to update my computers graphics and things and when I was finished, I clicked on the KI application… and it would show the title screen, fade to white, then end… and now I can’t get it to open at all, is there any way or reason this isn’t working out?

Thank you in advance, and also if I am just being dumb please let me know, I don’t know a lot about computers and I just want this game to bring me some form of joy… and also if there is a way to increase the speed of the game let me know that as well.

The download button for this is greyed out and it says “To use this app, you’ll need a device with more features. For details, see Additional information.”

I have a device with the following specs: