If there is a sequel, I hope there's a new engine

maybe one similar to the Mortal Kombat that allows finishers so that everyone can have more gory/brutal Ultimates and Humiliations. And hopefully, that would mean they wouldn’t have to reuse animations for the finishers.

maybe one similar to the Mortal Kombat that allows finishers so that everyone can have more gory/brutal Ultimates and Humiliations. And hopefully, that would mean they wouldn’t have to reuse animations for the finishers.

With any luck the engine can also allow things like the fast feel of gameplay that the old KI had as well.

The reason that the Ultimates weren’t gory was because they wanted KI to have a T rating. They have said this thousands of times.

huh, the Definitive Edition is rated M. plus, I thought it had more to do with the budget, rather then censorship. iirc the current engine doesn’t really allow finishers so they just had to do what they could with their limited budget, and reused animations and such. I doubt it had anything to do with the T rating.

The definitive edition is rated m because it comes bundled with classic KI. Which was m rated, rightly so. Because it’s being sold on the shelf, they have to rate it based on that. Did you even play the game before the DE came out. Plus, THEY HAVE SAID THIS DURING INTERVIEWS AND LIVESTREAMS! Do some research before telling someone they are wrong about something you know nothing about.

I never said you were wrong, stop putting words in my mouth. Also, if you could actually give me said links to said interviews and livestreams to prove yourself, that’d be nice. You give me the proof, lol.

Ok. I’m sorry for the outburst. As for finding what i’m Talking about. 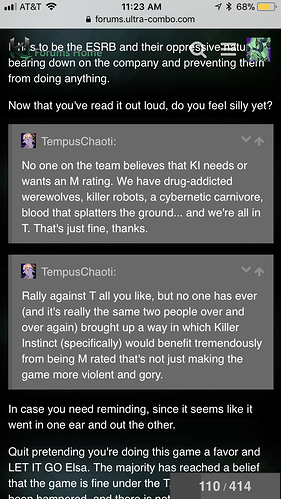 I have to keep digging for more. But these posts from Adam Isgreen (the game’s director) should help my case.

Ah okay, that makes sense, thank you. and it’s alright, everyone gets a little mad once in a while

So that’s it ? Thats all you want from a new engine ?

Personally I think the current one is perfect. They could just keep using it. However ultimately its a Dog eat Dog world out there so they inevitably must cram Ultra Mega Resolution textures in to the next game because that ■■■■ sells. Also the artists are going to want to do that anyways… they want there vision to come to life and not be held back by technical constraints.

Not all, just one of the cooler features they could have. Besides, the current engine seems a bit…dated.

Mortal Kombat X and Injustice 2 both use a modified version of the Unreal 3 Engine AFTER Unreal 4 engine was released, and yet those two games are deemed to be some of the most beautiful fighting games in the current console generation.

So it’s not JUST about the engine. It’s what the devs can do with it that’s important.

I personally would want the same engine but updated. Make animations and visuals more polished, but in terms of fighting mechanics, this engine is imo good for the task.

I just have a feeling like devs had 100% control over what they were doing. There is no stupid stuff like throw loops, antiair jabs, etc.

I honestly think a new engine built from the start to alleviate shortcomings the game has, such as dynamic angles without the need of the black screen that conceals the background and blood, and other visual effects would be nice.
However IMHO it would be nice if they were able to leave the gameplay itself essentially untouched, or at least 95% of it. I wouldn’t mind a new mechanic or 2 akin to stagger or flip-out, but nothing so radically different as the sweeping changes between KI 1 & KI 2.

Also, just for the sake of appeasement, how about customizable ladders? Meaning you can select how many players you fight against, whether you end on a boss or not, endless survival, regular AI or shadows…just an all-in-all pick the way you want to play mode.

I mean honestly that’s all anyone ever wants from a new insertion in a game franchise…more of the same with a sprinkling of different and exciting on top in a shiny new package.

I personally think KI looks as good, if not better than any other fighter on the market at times. The problem with KI is consistency. Whether or not that’s from a lack of time or budget, maybe even both. It’s still a great engine in my opinion. 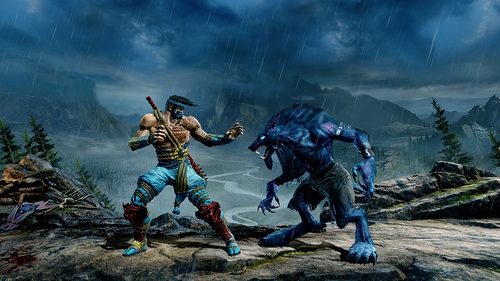 looks so, so good.

yeah it looks good, but it’s starting to look a bit dated compared to Soul Calibur and Injustice imo

how about customizable ladders? Meaning you can select how many players you fight against, whether you end on a boss or not, endless survival, regular AI or shadows…just an all-in-all pick the way you want to play mode.

Some of the character models could indeed need some polishing, but that’s not necessarily the engine’s fault.