Having error when going to exhibition or ranked 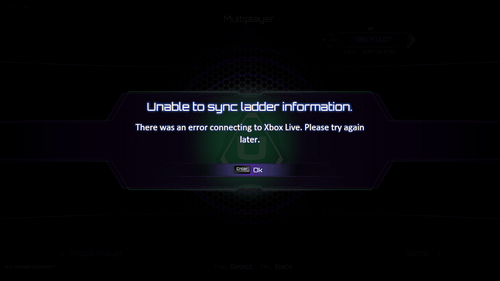 Does anyone have this problem recently or only me? I tried rebooting computer, it still occurs.

Also I noticed i am qualifier again, and Shadow Lords also dont work.

I have the same issue.

It wasn’t like that only a few days ago - I had my KI Gold and I could access Shadow Lords.

Now I can’t access Shadow Lords or ranked, my KI Gold is gone, but I still have all characters unlocked, my player/character levels and unlocks are intact, and I can play exhibition matches just fine.

I guess something is up with Xbox Live ? I had to troubleshoot some stuff regarding Teredo (VPN apps interfering with it that had to be disabled) but this current issue seems unrelated.

Yeah there appears too be a issue going on right now with KI as of last night its 7AM right now for me. It started with the unable too sync save data allot of people are having that issue as of right now i don’t think we can do anything about it i tried hard resetting unplugging the xbox an let it chill for a bit even re-downloaded my profile were just gonna have too wait till micro fixes it

I hope it get fixed soon.

on pc it tells you that you are not connected to xbox live try again later.

must be everyone that got kilgore maybe?

@CPUGHOST don’t think its everyone who got kilgore. I’m locked out too with the syncing save data error i didn’t purchase kilgore yet for me i was able too get online by selecting offline save option but when i went into a match with someone my profile seemed too have defaulted too lvl 1 with the new player title/card but i was able too play with the guy as soon as we finished the match my card reverted back too the way it was before i gotta say this is quite a weird ■■■ thing going on haha.

The most likely suspect is the Kilgore’s achievement update. The game doesn’t need a downloable update for that, but probably it’s related somehow.

Anyone heard anything yet?

Decided to play for the first time in months, and nothing is working. I can essentially do story mode and vs CPU. Ranked, Shadow, etc all keep trying to download stuff and eventually freeze the game. I’m sure they’ll figure out something soon.

Same XboxLive problem. On Xbox app (windows) is show all OK. I guess we’ll have to wait then.

Just as an FYI we traced this issue down. Hoping to have it fixed shortly.

Thanks for your patience!

Oh man I’m so glad to see it wasn’t only just me with the problems. I was playing last night and it was taking a long time to find a match for some reason. So I went to reset my Xbox and then this same syncing data error came up. I tried everything to fix it but to no avail.

Give it a shot now and let me know if things are working!

Give it a shot now and let me know if things are working!

All fixed for me, from Poland. Thank you

Looks to be running well here. I’m in Arkansas.

I’ll check when I get home tonight. Thanks!

It worked here too. Thank you!