I’m gonna give it a try tomorrow (its still downloading). Thank you guys for the tips

My brother kept persuading me to try fallout 4, even though I haven’t touch a fallout game before. I bought the game and since then, I’ve put 4 days and 2 hours into this game…I think that speaks for itself

. But I reeeeeeealllly enjoy playing this game.

No doubt, it is amazing and with the dev kit coming out soon, Xbox/PS will have mods at their disposal to make the game fantastic! Oh and future DLC is going to add a ton of content similar to its predecessors.

Fallout 4 DLC will be coming out in the next following months - in other words, we will be seeing new content in March, April and May.

Click the link to see cover images and teasers of the DLC and more information on how to register to play the DLC early!

Thanks very much for the update! I’ve been away from Fallout for a while, and never even got so far as to finish the main story since I tend to wander more than anything else.

I’m pretty sure I own the Season Pass for both my Xbox One version and my PC copy, but it’s worth double checking. I will have to look at the link later tonight!

I’m curious - will the Wasteland Workshop content be expanded enough to be a poor-man’s irradiated Pokemon?

Man, looks like I need to get money down on that DLC sooner rather than later! I love Fallout 4, but I don’t want to spend a whole 'nother game’s worth of money for a Season Pass

Thanks very much for the update! I’ve been away from Fallout for a while, and never even got so far as to finish the main story since I tend to wander more than anything else.

Don’t mention it, while this forum is mainly compiled of Fighting game enthusiast, I thought I would drop some news for the few Fallout fanatics like myself.

Man, looks like I need to get money down on that DLC sooner rather than later! I love Fallout 4, but I don’t want to spend a whole 'nother game’s worth of money for a Season Pass

No kidding, if I can get it for $20 cheaper, why the heck not. I think I will get it this Friday, wouldn’t want to forget the better deal.

Just a reminder, today is the final day to purchase the Season Pass for $30USD before the price increase.

So if you haven’t already picked it up, get it! Information about the first three DLC are posted above and do note that more content is coming, and for $30 - that’s a steal!

If you have already purchased it, then awesome! Our first DLC is about maniacal robots set to release sometime in March.

Your achievements on my Xbox feed suggests the first DLC is out for Fallout now; thoughts?

So, I put a couple hours into the new DLC, Automatron! 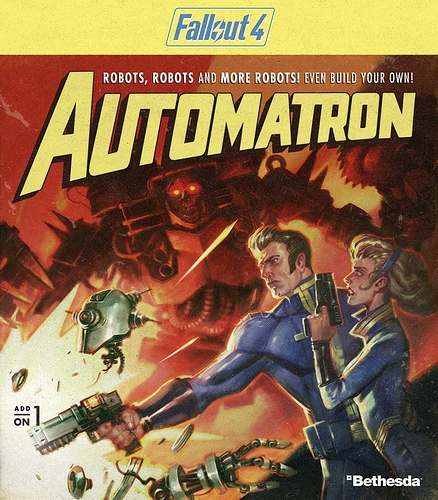 Shoutouts to @xSkeletalx for reviving the thread.

As for the DLC - good, bad, eh? So far, it’s good. Like any Bethesda game, you will get some added content to flourish the world you have explored for hours. The quest isn’t very long, I have only spent about an hour and can already see this quest ending soon; unless a plot twist were to arise that is. It’s a pretty solid quest with a cliche plot but fun nonetheless. Also, for those Fallout 3 fans - there are some throwbacks that you might find interesting.

So what is the main attraction to this DLC? In Skyrim we had Dragonborn which was a welcoming quest but featured a catch, the ability to ride dragons! What about here? Robots. Mod. Carnage.

You are essentially given a new work station listed under “Special” when you are in the crafting menu that allows the player to create new and mod old robots, sweet! Keep in mind, it may seem limited in variety but rest assured, you get more options the longer you play the quest and combat invading robots.

Overall, if you wanted an expansive world or something game breaking that will change Fallout, then you might be disappointed. If you wanted more of what you already love to add some new ways to adventure, then that is what you get.

Solid DLC, free for season pass owners - about $9.99 for the standalone price. Good story, few neat touches to the world and more ways to mod your arsonal and venture the Commonwealth. Happy hunting!

…but can they be THROWN?

Can you walk around with a companion AND robots? Or does having a robot with you replace your companion? Are there any new benefits, bonuses or modifications you can do to the existing robot companions?

Got any screenshots to share with us of your favorite deathmachine this side of Fulgornia?

Lmao, I got the reference.

Unfortuently, your robot will act as a companion, sending anyone currently with you home. You can still have Dogmeat though.

With that being said, this is done because you can modify any of the current robot companion of yours like Codsworth or Curie. That means you can essentially change Codsworth from a floating robot to a sentry with dual Shiskobobs.

I don’t have any at the moment since I ran out of parts to create new mods. Good to note that you will need lots of steel and oil.

I’ll get a screenshot of my modded robot in the next day or so after I explore more and get some new mods… I might even make a robot modeled after Fulgore, hmm.

I’ve considered getting the Season Pass, since I do really love the game. I just happened to miss the lowered price window since my money was destined elsewhere

Still, I wanna give it an honest go.

After playing the DLC for several days I can see why some fans are skeptical about purchasing the $50 season pass. Normally for $30 I would say go for it. However, since the increase I will say either pick your DLC or if you are hardcore just nail down on the full price.

Automatron is great if you want to have and mod robotic companions. There are only 3 new weapons, two of which are melee with little mod option. DLC Quest is the length of your ordinary 3-part quest. So really it all falls down to taste there.

Next month is just a workshop expansion for $5 so I doubt it will add anything extraordinary.

Far Harbor is totally worth it: new map, weapons, characters, etc. $25 so half of the price of the Season Pass.

After that, we don’t know what else is coming, could be another major expansion like precious Fallout titles or just small add-ons, we will see.

Been chipping away at this game since launch and just finished the main quest recently… and I would hope the majority of the side-quests.

Anyway, I thought it was really good.

The world design was definitely the star of the show for me. Trekking to a raider base on top of a ruined highway for miles, stumbling upon a parking ramp mysteriously turned into a deadly maze full of traps, descending into the Dunwich Mire, etc. Many of these fun, unique moments I just discovered randomly by exploring and there’s so many of them. FO4 might be my favorite sandbox of any Bethesda game ever.

The real-time gunplay is also a lot better than it was in 3/NV. I’m glad I don’t have to rely on VATS to hit things all the time now. Although, I did find it a bit strange that you can’t use grenades in VATS anymore.

As far as complaints, I thought the main quest was pretty weak overall and especially by the latter half or third. I particularly wasn’t the fan of the rushed “Quick, go Rambo on everyone besides besides your chosen faction!” climax. I also didn’t like the new dialogue system; not the voiced protagonist, but the vague paraphrasing and inconsistent structure.

Excited for the DLC, especially Far Harbor! I haven’t been let down by DLC from Bethesda yet.

Brace yourselves for Wasteland Workshop! This is DLC features an overhaul to your settlement workshop by adding new features and giving much needed options for building.

You can expect this DLC to start rolling the update around 12am ET on April 12th. This is of course free for Seasok Pass owners and $4.99 for seperate purchase.

So after a few solid months, I am having trouble really settling in on Fallout. Xbox Stats indicate that I have played for about 8 days, which is a great amount of time make no doubt about it but even then it has been like I can’t immerse myself in Fallout for some reason. It is a great game, the gunplay is incredibly refined compared to its predecessor and their is so much more.

I suppose maybe the game doesn’t feel full yet or I just haven’t had the time to invest like I would’ve when I was in high school. I’d like to think it’s the latter especially when the game isn’t fully finished considering developing content is still rolling out. When I got Fallout 3 it was in its polished state so it made a difference.

Also because I am getting my rig soon I am considering just holding off on Fallout a little more just to get it on PC where it will look outstanding.

Aside from that, here is my journey thus far…

Codsworth getting stuck on the roof

Exploring the woods in my T-45

Morning mist in my settlement

Waifu getting inside spare T-60

My previous home courtesy of @TheNinjaOstrich

So far the stories created through the journey have been grand. Part of Fallout isn’t just the plot or quests that add depth to the world but the journey you happen to come across during each sitting. Love this game

Lol. You told me you moved out!

I’ve played some Fallout4 for awhile now its’s fun but damn is it unforgiving. Still I’ve had my moments. It’s acutlaly my first Flalout game, beofre that my first Bethesda game was Skyrim.

Man I have a fun story for you guys:

I was doing some exploring after I finished a mission and I suddenly herd that music and I thought: "uh oh…bandits?..giant scary ■■■ mosquitos? Nope it was a giant ■■■■■■■ scorpion! I like scorpions but holy hell that’s that’s first time I have ever been terrified by one in my life.

I had no ammo so I ran and climbed on top of a car, I realized my only option was to fight it, so what did I do? I picked up the only melee weapon I had; a rolling pin. I basically played whack-a-mole with this sonuvabitch while I crouched down on top of the broken car waiting for it to pop up, and managed to kill it after several swings.

I gotta hand it to Bethesda you can get alot of interesting stories to tell from your experiences on this game.