Today I spent a bit of my time in the realization of a stage that was very heartfelt, that of Eagle. It was not easy to find all the right elements from the web, but I had in mind what I wanted to accomplish.
An underground laboratory of Ultratech, organized so that Eagle, during its stasis, every time he opened his eyes could somehow observe a familiar landscape, in this case the snowy reserve, almost as if wanting to infuse into him a state of induced relaxation through images.
I planted a tree branch near the panel, in fact this only serves as a point of support for his eagle, but the branch itself is fake and it is a cybernetic device to control the cyber bird.
for the rest it is a normal laboratory.
during the progression of the match the images in the panel change to the laboratory with different shades of color, until it is lighted and shuts off, some short circuits cause some cables to fire, if you run the ultra, turn on the anti-fire sprayers a light on the ceiling illuminates the lab like the mermaid of a police steering wheel. 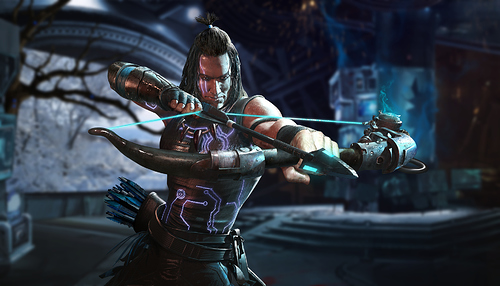 That’ll be best stage for Eagle.

Wow, very nice! Love the contrast between the left side of the stage and the right side. Something like that would be very cool for Eagle.

This is gorgeous! Very nice done, would be perfect for him.
Now I wish you would make a night-time rooftop stage for Orchid, kinda like her KI1 stage…

I’m always rather impressed with your work on stages, but this is probably the best thing you’ve made thus far. VERY well done!

Yo, that’s awesome! I would love to have had this be Eagle’s stage in the game! Great detail, good ideas with the match progression, and makes sense for the story and character. Too bad we can’t have a random billionaire make a donation to IG so things like this could be more than ideas and dreams.

i no think any stage ultra for this…

Where are the other pics for the characters that don’t have stages?