So now that you guys have him in our hands, how does he seem to you?

For me…I noticed it seems like he’s going to be good at stripping off chunks for Aganos, and holding back while charging an arrow is reminiscent of Fulgore’s S1 heavy laser. I swatted Sadira out of the air rather easily. I expect it to be altered into a low stagger move in the future, lol.

As far as his specials, wingspan is going to take some getting used to. It looks to be an awesome cross-up tool, but right now I’m just fumbling around with it.

Wingspan with the bird dash is absolutely ridiculous.

Aside from messing up a lot the cross up moves and having the bird do things he seems like a really fun character to use. To me he plays like a mix of thunder, Kilgore, omen, and shago. The problems I’m currently having with him is figuring out when and where to use his medium command normals since a lot of them require various directional inputs and learning when to use his his cross up vs his slide (I keep confusing the inputs for them). All in all he’s great and fun character and I can’t wait to see what kind of crazy combos people come up with.

I really like all the directional inputs and doing weird motions while summoning bird. Etc. But is it me or do his moves not really have much personality? It’s like he’s just kind of there doing stuff.

He seems neat but honestly nothing he does has wowed me, he’s solid but I’m frankly not all that impressed.

Granted that might just be because he’s not my type of character but so far I’m not really enjoying him all that much.

I bought him with the intent to lab him and figure out how to play against his with my main Kim so my thoughts are going to be from a vs perspective.

The bird is ridiculous. Flat out. Shadow slide that’s (i think) just slightly unsafe? Bird covers him with the screech. The jumping around is nuts too; he has multiple angles and multiple ways to attack you from over your head. He feels like Omen in that regard. Plus, there is absolutely no visual cue that Eagle has called it into play. I found myself thinking it’s better to maybe notice when it’s active versus trying to predict what assist he’ll call out.

From a distance, he’s a menace. There’s a good bit of intimidation for him to just draw the bow and shimmy back and forth. I’ve found that some fresh Eagle players have done the slightly charged overhead ones into the lateral ones for a projectile mixup.

He isn’t without his weaknesses. He is HILARIOUSLY bad on defense, especially on wakeup. In fact, i think his best wakeup option might be to crash the bird? So far, i’ve been able to avoid that with wake up grab. And once i have him on a knockdown, i think the best thing so far has been to not respect anything he does or tries. The worst option might be to get hit with crash the bird, with how far the knockback is on it.

For Kim specifically, i’m thinking Firecracker against the arrows might be useless since he can clip her low the second he sees it. Dragon kick from about 2/3 length screen can get sniped on reaction seemingly. Her AA is not great and trying to snipe jumps with angled Dragon Kicks

He will get absolutely mauled by a close up S. Firecracker against his S. Arrows. Like 50% - 60% of his lifebar vaporized bad. Even the overhead ones are not the greatest idea, the trade is well and away in her favor. And interestingly, when i’ve done this in training mode, it’s not automatic, but it HAS crashed my game going on 3 times now when i’ve tried this. Can anyone else that has them verify this?

The Shadow call-all-my-arrows-back move is punishable/interruptable and if you hit it, he does not call them back and wastes the bar. Also, since they call them only to right in front of him, if you have the capability, you can hit/throw him and make him play with a much more limited supply of arrows. So in this way, you’d play him like you’d play a Maya that lost her dagger(s).

I like everything but the Wingspan move…I just cant seem to get it to “do anything” worth a damn in a match. In practice I can fumble with it but I really couldn’t do much out of the light after move or the medium bounce back kick. I can get a n OK juggle combo out of the Fall Out heavy kick…but that’s about it.

It seems to me like wingspan is very similar to Cammy’s Hooligan move. One neat trick I’ve found it to do an empty heavy wingspan up close to land on the other side of your opponent, and immediately follow-up with a slide.

Some interesting uses from his thrown, using wingspan, among others 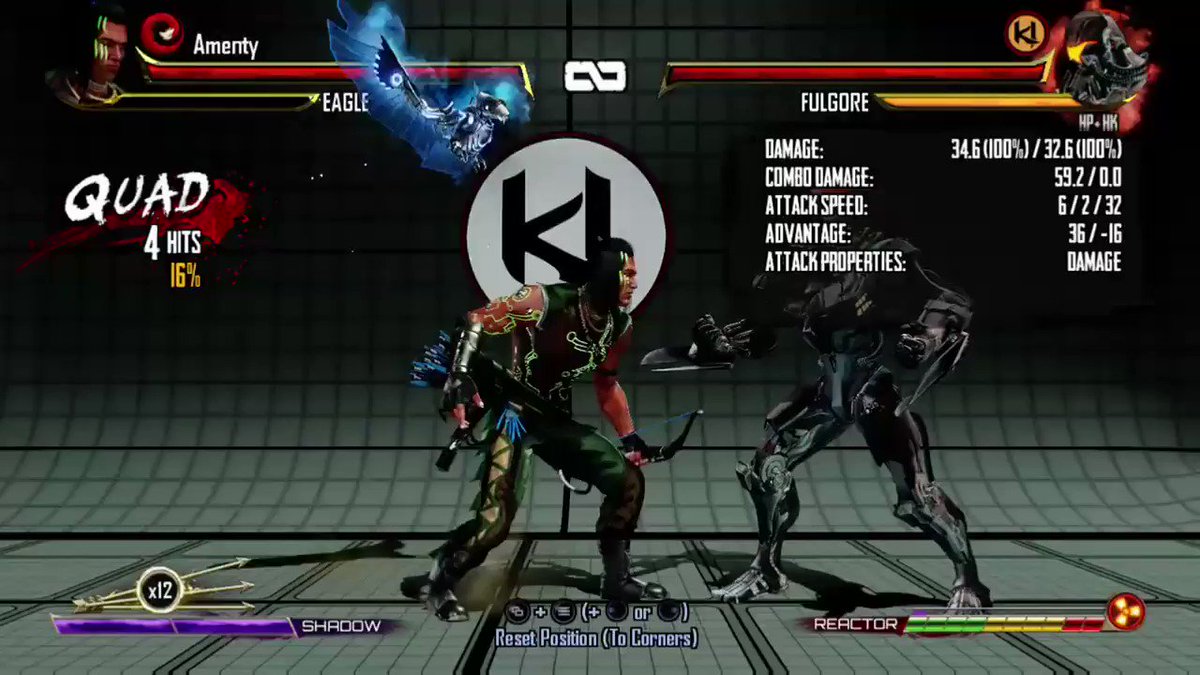 I use it more to cross up than actually use the follow ups. Do any normal, cancel into medium wingspan, plink bird screech, the first hit or the bird screech will hit infront, the second hit will hit behind, the third hit will let you confirm or keep them in block stun for you to continue pressure.

Eagle assist can make grounded safe, even shadow slide. If the bird is not on cooldown, Eagle is impossible to shadow counter

Cool! Thanks! Eagles corner game is crazy! I found trying to guess a way to get out of the over head arrows is tough!

After playing Eagle I could see his pet eagle getting a nerf of some kind like extra cool down time in the future. He is pretty quick to recover on all things except the dive and can pretty much make any move Eagle does safe.

But so far he is tons of fun. Definitely potential.

Yeah that bird is definitely getting hit with the nerf hammer. Makes everything safe, unshadow counterable, mixes up, endless frame traps, short cool down. Kind of makes finding tech for it seem like a waste since it might not work in the future.

the guy is pretty easy to ■■■■ with on wakeup so the eagle isn’t that much of a problem. Out of the spectrum of bad wakeup he’s very ■■■ since Hisako has counter and Backdash at least for example, Eagle’s got nothing so he has to eat the mixup.

If you call back assist right as you attempt a throw, the assist will stay active long enough for you to keep advantage if it’s teched. I imagine you could do something similar with down assist to break put of pressure–call assist as you try to throw tech, and you you get hit the eagle bails you out…probably.

If you cancel scatter shot into shadow call, you WON’T get back the arrows you just shot. Use the light version so you end up with the most possible arrows.

eagle is killer instincts hawkeye. no thats out the way, I like him, alot better than the other bonus characters they added IMO.

His set play is good but he’s going to struggle hard on wake up. Especially against grapplers and characters with armored meaties who can bypass the bird.

Does Eagle have an anti air of any kind? Only played with him for a few minutes.

His arrows are decent aa at a distance. But he struggles when someone is right on him