So I finally decided to get Dark Souls 2. Needed something to pass time while I waited for Fallout 4.

I’ve had quite a bit of fun with it. Frustrating for sure, but as long as you don’t do anything dumb there’s plenty good gameplay! I’ve gotten as far as The Last Giant and I’m searching for The Pursuer.
I’m interested to see if any of the KI forum members indulge in Dark Souls, and how they do it!

Played them all to death except demon’s souls which I haven’t played at all.

Your pure int sorcerer build will run into problems in the dlc portion of DS2. (if you have the DLC that is)

I found high STR with a huge END score was the best way for me, even though I initially tried a high AGI dodger/parry character. I like wearing the heaviest armor I can (END allowing me to move at decent speed) and a heavy shield, blocking 90-100% of incoming damage (less for magic) and hitting back.

I play casually, but my brother is a nut. One of those multiple play through, owns every different version kind of things.

Played a ton of DS2 before scholar of the first sin came out. Went the heaviest possible King’s ultra greatsword and lightning build. Terrible for PVP though

I usually play through the games the first time with sword and shield, and then end up in a poor leveled character.
My 2nd run has always been a magic user to try out the spells.
And my third character is usually where I go balls out and maxing achievements and so on. This time with dex/faith builds.

I prefer rolling around and evading rather than relying on standing still with a shield.

Yeah, I’ve decided to experiment with zer0 armor on my strength build (herein referred to as “Beth”)to keep my agility up. I take about the same amount of damage either way, at least early game. Just need to make sure to build some resistances and hopefully get carry weight and poise high enough to use armor while being speedy.

Update:
After about an hour of grueling combat, Beth (or, ZomBeth, as she appeared) has crushed The Pursuer with her Demon’s Great Hammer, nicking the Ring of Blades and The Dranleic Armor/Weapon set in the process.
Living the good life.

I find super heavy armor with a fully upgraded Longsword works pretty well. I have a fire sword, lightning sword and a third weapon all equipped at the same time.

Alrighty, I’ve got a few different special things that I use to obliterate my foes now, and I’ve made progress.
After a few hours and 2 human effigies, I finally defeated the Ruin Sentinels. I had to use the help of a summon, and forsake 2 handing my great hammer for a shield and Craftsman’s Hammer, but I did it.
Made it most of the way to The Lost Sinner with the hammer and an accidental summon, until a Flexile Sentry ruined my day. Good thing I switched loadouts, though. I got hit with the NPC Invader Forlorn. Turns out shield and lightning hammer are a pretty good bet against a twirling greatsword.
I spose the Ruin Sentinels and Forlorn Invader were good practice for The Lost Sinner, since I got her down 95% on my first run and didn’t take a hit the second.
As a bonus, I freed a petrified sorcerer guy who crafts Boss souls into weapons and armor.
On my way to Heide’s Tower of Flame to go take care of the next batch of fools, and I got me a large club with S scaling in Strength that I can use one handed until I get to 50 for my Great Hammer.
PRAISE THE ■■■■■■■ SUN!

I’d offer to join you some time, but there are a couple problems;

I haven’t looked too hard into DS3 (seriously, just announcing it is plenty for me) but I heard a rumor it will be much easier to play with friends.

I don’t like playing the Soulsgames with other people = )
It ruins the atmosphere.
Offlinemode is the way to go for me.

I only use NPC summons out of desperation. I accidentally summoned a Player once and we sped through a good chunk of Lost Bastile in about 5 minutes.
Edit: Here’s my lovely lady in one of my luckily unhallowed moments 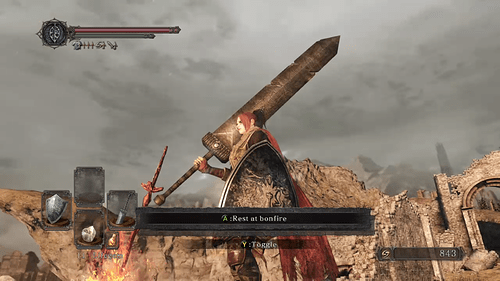 The best strength weapon, in my opinion, considering the move set, range, and stat scaling.

Update: So far I’ve had mixed feelings about the Ultra Greatsword. It’s nice to wield it 1 handed so I can keep a 100% shield ready in case of enemies that deal stupid damage, and the fact that it uses common titonite to upgrade is a bonus (using a bit of spare change I got it to plus 6 and it does some beautiful damage…when I hit with it) However, there’s just something so cathartic about slamming someone to the ground with 2 handed Great Hammer R2, and then beating them down again and again.
That being said I’ve actually spent a ton of time with that Craftsman Hammer. It’s done me well so far. Though I’m thinking I’ll try out something else, since twinkling titanite isn’t exactly common.

Anyway: Progress report. 6 bosses today. Flexile Sentry, Dragon Rider, Old Dragon Slayer, Executioner’s Chariot, Skeleton Lords, and Covetous Demon. All of them but the Chariot were done in a single go, and that was 2 tries (minus all of the humiliating deaths beforehand).
Not bad for my first Souls game

of course, I’ve had a bit help from the wiki here or there, but that’s normal right?
Right?
Also, found the Sun Bros. Now I can actually praise the sun.

Edits: Some notes
-Found a Old Knight Shield. 100% physical defense and 60% defense for all magicks and effects. It’s pretty rad.
-Decided that the sorcerer (when I eventually get to them) will have room for god in their black little hearts. Because healing spells and charged bolts sound pleasant.

You have made me all excited about DS2 again. I should try a third time. I gave up twice already.

Demon Souls was my favorite and still is, and DS3 seems closer to Demon Souls apparently. Yay

I’ve heard a lot of good things about Demon’s Souls and Dark Souls 1, from boss/enemy design to world layout.
Though I’ve also heard they’re much harder, so it’s probably good that DS2 is my first. It’s funny, up until recently I didn’t care about the Souls series. Thought it was just a game designed to be difficult for difficulty’s sake. But after actually watching people play the games and reading up on how deep you can go with character builds (people dual wielding great weapons come to mind, reminds me of Diablo 2 barbarians) I had to give it a shot. I have not been disappointed, and I’m probably going to wind up grabbing Dark Souls 3.

I especially enjoy the slow pacing of the DS series. It almost always feels like a nice break from all the constant fast paced action in other games I play. Recently, put in 200+ hours into Witcher 3 so certainly not afraid to take my time with a (slower) game. I hope I can put in at least 10 hours of dark souls 2 to get over the hump.

@Fwufikins If you’re planning to go with a shield for any length of time, do yourself a favor and pick up a standard Longsword. Upgrade that all the way (pretty simple as it uses common stuff) and throw a fire or lightning enchant on it since there are a lot of weaknesses to those two. You can use that one or two handed as needed, the two handed heavy attack makes a great poke. It doesn’t weigh a whole lot either, so you might be able to add it to your standard loadout.

That is simply not ok. At all. Period.