Mix up potential? Because she doesn’t have her daggers, she only has her kicks, which are among her worst attacks! It basically ends up evening out, IMO, instead of giving her an advantage like it should.

Personally, I think damage should be the same and the daggers shouldn’t be removed for a certain number of hits (up to 4 for each dagger pip used for the assault) similar to how Spinal’s skulls work.

I don’t know I’m not a maya player. But dagger assault does tell me “mix-up potential”.

OP, I wish I could answer your question. I don’t play Maya, so I’m unsure. It seems like a really neat tool, and it sounded like the +frames they added could’ve been helpful, but I guess they aren’t as helpful as Mayas had hoped?

Does it aid in her juggle game? Does it help extend pressure? It may be too risky to go right for a mixup or tick throw, but can you get cheeky +frames out of it? Can you confirm off of the dagger hits for derived link combos? There’s gotta be something worth doing with it…

Mix up potential? Because she doesn’t have her daggers, she only has her kicks, which are among her worst attacks!

I’m not a Maya player either, but scoff rationally, please.

Her overhead is among the worst in the game though. It’s very slow and easy to react to. Even with the fake, it’s not a great mixup.

Her real high/low mixup with dagger assault is going to be using the blockstun from daggers to set up a mixup between jump in/empty low. If it were easier to set that up immediately without a risk of getting hit and losing the daggers, assault ender might be more useful.

The real issue, I think, is the fact that even if the ender works out and you get the mixup, your daggers separate at the end. It’s a very risky move without instinct, and I don’t think the reward lines up very well with how bad the situation can be afterward.

I think the ender has potential but there’s so many downsides to using it I’m not surprised most players are avoiding it.

That’s fair. Even I can react-block her OH, and I can’t react to anything. She’s definitely better off with the jumping mixup - but that’s still K’s. I’m not trying to be argumentative, I just had to point out that lack of daggers doesn’t eliminate her mixup options. Her best buttons, yeah, but not buttons that affect the opponents db.

I either forgot or hadn’t realized that the daggers fly off when it’s over, regardless. The misfortune is meme-worthy. They can’t just, like… land somewhere reasonable? Would that be too big a buff - just make them fall on either side of the opponent?

If they fell straight down when the assault successfully completes, meaning opening the opponent up basically guarantees getting your daggers back, I think the ender would be MUCH better. If I were to name all of the issues with the ender:

That’s a LOT of drawbacks. If you made the daggers fall straight down at the end of the assault you’d also want to add to the list that more pips = more chances to get hit before assault ends and lose your daggers.

One of the problems with balancing it is it’s the kind of move that can get out of hand really fast. Locking down with blockstun is a big deal, the kind of thing that can take a mid-tier character and rocket them up to top tier status.

What it would take for me to consistently use the ender is being able to reliably get the daggers back if the assault successfully completes, and having an option to cancel it somehow when in combo so the daggers don’t ruin the combo. Maybe you could combine the two–make it so she has an option to cancel the remaining attacks from the daggers when in combo and return the daggers to her hands. That would also make it more worth it to use the ender with a large number of pips as you would be more likely to have a chance to get your daggers back when you open your opponent up. On the other hand, that could be strong enough that you might want the daggers to still separate at the end if she doesn’t cancel it.

I like the idea of in-combo assault cancel. That’s clever. I had also forgotten about the KV spikes from DA as well. There are a bunch of tweaks and adjustments they could make, but yeah, it’s got so much potential it could easily be pushed too far, then there’d be weeks/months of Mayapocalypse in the interim while they work out something else, or revert their hypothetical changes.

A beta server for testing of crazy adjustments before shipping them live (ala SG Endless Beta, or Blizzard’s various PTRs) would be dream come true, for the playerbase and maybe even devs alike. The unlikeliest of dreams, but oh to dream.

Which aren’t as good or as fast as her daggers.

My idea would be too
-get rid of decreased damage

I can’t dispute that. I was just pointing out that her daggers have nothing to do with her mixup capacities. Her mixup-related buttons are all on K.

My idea would be too
-get rid of decreased damage

I don’t know exactly what attributes to the decline in damage. Could be scaling, because of the extra low-ish damage hits of the DA. It might be big, might not be so big? I think the damage is the least of the problems though.

KV could be a tricky one too. I know right now, they ruin combos because they flood the KV… are the DA hits unbreakable though? If so, they should still carry a KV penalty, but maybe not as steep as it is currently, considering the abstract low-damage factor.

Auto-comeback might be a bit much, considering that’s like… the entire point of her INSX (unless I’m overlooking something), but making sure the daggers are punishingly far away upon completion is lame. They should at LEAST fall somewhere reasonably close, provided the DA is successful. If Maya gets hit during DA, she should have to work to get them back… but it shouldn’t be so darned easy to hit her during.

I hadn’t realized that DA will spend strikes whiffing at air on a KD opponent. That sucks too. Might be tricky to code, but that is an unfortunate feature. So not only do you have to work against the odds with your kit stacked against you to get value out of this thing, but in order to get full base value, you also have to keep the opponent standing throughout? This DA thing is sounding more and more like a chore.

I am certain that +4 is a carefully selected value - any more, and she could (theoretically - it may change depending on spacing) link jabxx off of it to carry on the combo. Granted, with the extreme KV of DA, this wouldn’t be much, but then you’ve got another potential knockdown or blowout to waste DA strikes on, and that’s not great… pretty much, any more than +4 is walking an unnecessary line between way too good (think Tusk’s old Stagger Enders) and “seems good but actually detrimental in a non-obvious and frustrating way,” - +4 is pretty much the maximum advantage allotted by Advantage Enders to allow follow-up pressure or mixups without allowing followup links to maintain the combo. This applies to TJ, RAAM, Gargos, and maybe others (can’t think of all off the top) - also Eyedol’s Warrior Grab. In short, +4 is pretty much the one part that seems like it’s going right.

I forgot about j.HP crossup. I’m not arguing that her dagger buttons aren’t better - they so very much are. I’m just saying that (aside from j.HP) they have no bearing on your opponents crouchblock.

@GalacticGeek DA strikes are NOT overhead.

We know her daggers hit overhead during their barrage, so you pretty much only have the option of hitting low when they do, which would force them to get hit because they can’t block both. However, because her kicks are so slow when she doesn’t have her daggers, it’s far too easy to open her up and force the daggers to drop, which is why I like my suggestion from earlier.

Not really her over head is terribly slow, jumping HP is a better cross up and if they try to jump you can get a juggle of the hit. Mantis is with the punch buttons as well. WWhile there might be more but in my opinion the punches are strictly better.

they can’t block both

Actually you can. If you’re in blockstun from a low you can’t get hit high and vice versa. It’s to prevent unblockables. Though i think there’s some funky rules behind it. 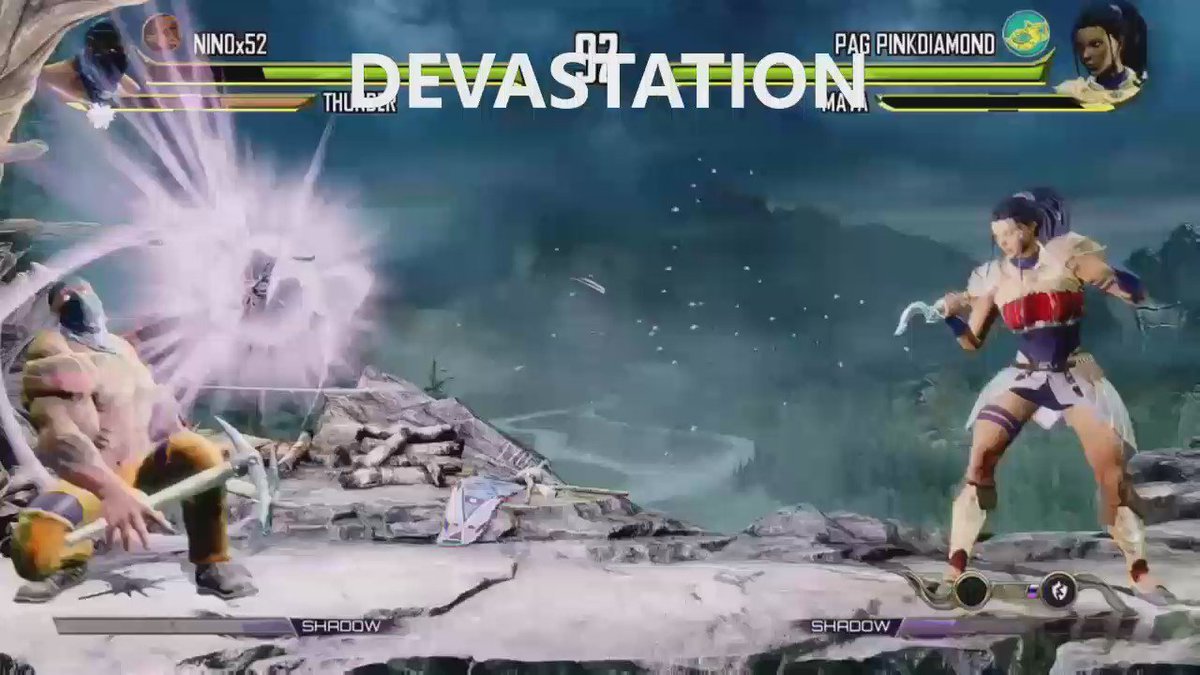 EDIT: All this complaining about how “useless” dagger assault is when there are multiple things about it you guys are failing to consider:
-she can mix in crossups with dash jump and heavy leap kick
-the daggers can juggle for her; create easy manuals
-constantly performing resets makes the damage scaling not matter as much
-the daggers can punish moves for her if she blocks and the opponent is reckless
-dagger assault is useful without having to have full pips

For those that don’t wanna click, or can’t readily decipher what is happening on screen - time your jumps so the DA strikes themselves crossup. That’s dirty.

We know her daggers hit overhead during their barrage

They shouldn’t fly in both directions when falling off at the very least. Both should always fly behind opponent or fly in front, dunno which

Dropping straight down, or always launching both toward maya, or letting her get the daggers back into her hands directly…anything, just something that means that successfully mixing up your opponent with dagger assault isn’t something that leaves you high and dry, picking up a weak combo and ending with your most important neutral tools scattered across the stage.