Creating the Music for Eyedol

Celldweller & Atlas Plug are back with a look at how they created Eyedol’s theme.

Huh, cool. Awesome to see them in the same place doing stuff.
Any chance we’ll get uploads for the Gargos and General RAAM “Making Of” viddocs? 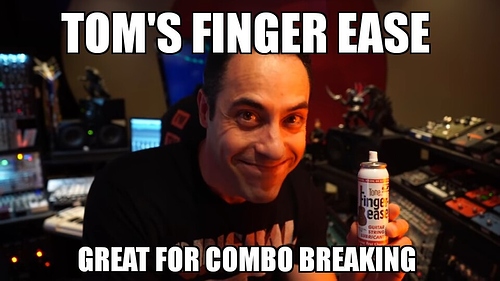 Ive been using finger ease for 20 years on my guitar strings… cant leave for a gig or practice without it!

This guy is asking the right questions!!

Amazing how no guitars were used! That added some variety to the S3 Soundtrack for me.

Are there more of these stuff for other chars on the cast? This is awesome.

these two are great, they have a comedic side also!

I wish Kims had no guitar.

Better late than never. Hope we get similar Making Of videos for the other themes like RAAM’s that didn’t get covered.

By far the best song they have put together for Season 3 IMO. For a minute there I thought they had done moved on from the KI project since the silence period was so long. Glad they were still a part of the project till the end and hopefully into the future. Seems they get better as each song comes along.

I’m very ignorant about the process of making music but DAMN THATS A LOT OF EQUIPMENT!

Anyways although Eyedol’s theme is the least favorite out of S3 I really enjoy these videos and hope to see more of them for the other themes that have already been released.

We really need to get the two for Gargos and RAAM.

Are there more of these stuff for other chars on the cast? This is awesome.

look in his uploads. starting from 5 months ago.

I’m very ignorant about the process of making music but DAMN THATS A LOT OF EQUIPMENT!

Its basically a “build your own instrument” process. Then you can wire them in 1000s of different ways to make endless amounts of sound.

Lol…WOW…you know I think I may have been responsible for the whole “no guitar challenge” thing they had going on there.

I didn't know if anyone had already posted this or not but on Celldweller's Facebook page they did a Q&A regarding their work on KI season 3. https://www.facebook.com/celldweller/?fref=photo I actually got a question answered myself......at...

It’s hard to find the video because…well facebook…but go to celldweller’s FB page & look under videos & there will be one labeled “Creating the music for Killer Instinct: Live Q&A”

The funny thing is…What I meant to say to them wasn’t if they were going to make one that wasn’t guitar prominent, but wasn’t synth-rock prominent…Oh well…Eyedol’s theme rocks anyway.

When will MS create the S3 soundtrack for the fans?

These guys seem really cool. I love their sense of humor. Eyedos theme is insane, and it really shows that they can make stuff that doesn’t sound like a few of their other tracks. They really kind of went out there with eyedols theme, and it turned out to be probably the best in the game.

Nice to be given a backdrop in to this theme. It felt light on the reasoning for portions of music but I really enjoyed the humor in this one. I have also been learning to enjoy the style of Eyedol’s theme, playing it sometimes on repeat during the slow hours of work.
Also maybe an update on if/when one of these is coming for Gargos and/or RAAM?