Still the time to make his visuals more appealing and so please every single fan of Cinder. The things that bring a big contrast to his visual are his pad shoulders, his mask, and these things at his middle which i can’t even tell what it is. Without these, Cinder would look legit, aggressive and even more badass. I like how his mask forms but it should be just a taunt or something. Maybe it should be reversed the way how he uses his mask when he enters the fight and while on instinct mode. To get masked only on instinct mode. Please drop these shoulder pads cause it makes him look very silly. He looks so awesome without the mask. Here’s proof: 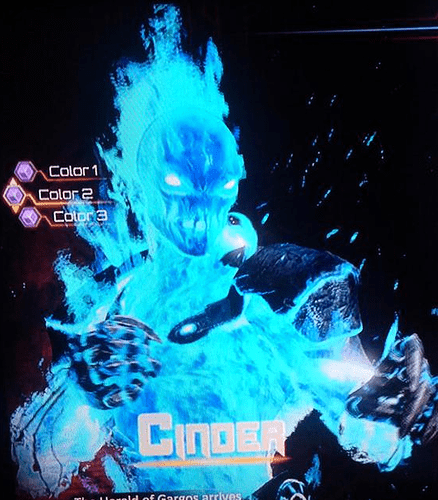 Perhaps its time to reconsider that giving him shoulder and middle pads along with the mask was a sad mistake. Would be a big relief see Cinder getting rid of this garbage.

And storywise, its all inconsistent, sorry.

"SHOW YOUR FACE TO THE WORLD CINDER. YOU’RE THE WALKING STAR AND KI TRICKSTER. YOU HAVE TO FEAR NOTHING"

I would just like an accessorie set that takes off the mask and all of his other stuff. Maybe even as a level 50 accessory.

Current cinder is a joke both visuals and gameplay, some of his retro accessories are in the wtf category along with a few other characters.

For the record, you can always argue that characters would look better or worse with different changes. But I think that Cinder looks fine the way he is.

Just play Retro Cinder if you hate the new stuff that much.

But im so pity of this default look. Always having to use the alpha suit to cover this things on his shoulers which looks more like wound vessels. Ugh!

Well, some people like it… so why not let them use it?

Well… Its a common sense. To make his look please everybody. Not just one or another. Im thinking about ALL fans of this character who deserve a decent rendition. And the people who own just the combo breaker pack doesn’t have access to the alpha suit. His retro is too superior from his default. Combo breaker owners don’t have access to retro costumes either.

Its a common sense. To make his look please everybody

Actually, that’s nigh on impossible.

Well… Its a common sense. To make his look please everybody. Not just one or another. Im thinking about ALL fans of this character who deserve a decent rendition. And the people who own just the combo breaker pack doesn’t have access to the alpha suit. His retro is too superior from his default. Combo breaker owners don’t have access to retro costumes either.

You can buy his alternate costume separately can’t you? Or is that not a thing?

And, not to put too fine a point on it, but usually when people say stuff like “I’m thinking about All fans of this character…” what they mean is “Do it MY WAY!!!”

I mean, do you really think IG and MS sat down and had a conversations where they said “You know what? Let’s make Cinder’s outfit suck for the fans. After all, they don’t deserve a decent rendition of the character.” Of course they didn’t. But they had to bring the character into the 21st century, and his original “man on fire” design wasn’t going to cut it. So they made choices. Do you have to like those choices? Not at all. Can you complain about those choices? Absolutely. But please don’t come on and act like your opinion is somehow shared by all the “fans” and you speak for everybody so it’s just common sense that dictates the developers need to listen to you.

Actually, that’s nigh on impossible.

Its not impossible to nerf the hate on his new look. It just needs to be simplified.

You can buy his alternate costume separately can’t you? Or is that not a thing?

Well, that’s too bad. I guess the real “fans” should spring for the Ultra edition.

Can you see how fare it is?

I’m not sure that it’s an issue of fair or unfair. What you’re asking is to make the new Cinder outfit look more like the retro so that people don’t have to buy the retro. I’m not sure I would call that fair. Instead of lobbying for that, ask them to make the alternate outfits available for individual download. I spent $40 on the season 2 Ultra edition (and I would do it again), even though it has since been on sale several times. It’s not a question of fairness.

Anyway, I’m not going to pull out this thread for twenty pages with one sentence rejoinders. Cinder’s redesign was a big topic when he launched and it’s been talked to death, in my opinion.

PC players will laugh so hard at our faces and make fun of xbox owners as long as they use their polished character mods at the cross-plataform mode.

What in the world would possess you or anyone to listen to someone who would be so preposterous as to berate you for your choice in gaming platform?

I would use Retro Cinder but I like New Cinder’s fire effects better. I just want retro cinder with the new fire effects.

WTF dude. Some people like that design of Cinder, you know. They shouldn’t change anything because you have a problem with it.

I never said change retro cinder costume. I meant I would like an accessory set to new cinder that would remove his mask,shoulder pads,etc so we can have a soneone retro cinder with all the new effects.