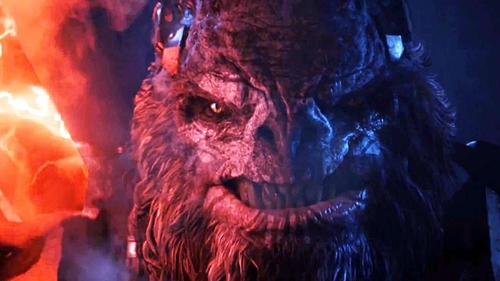 He is the new Main bad guy in Upcoming Halo Wars 2 game and he just looks like a Bad *** they say not even the Covenant could take him down. So how cool would it be to have him in K.I to see him fight the K.I cast and even take on the Arbiter. His Accessorise could be type of Brute Armour From Halo 2,3 and Reach such as the Captain, Chieftain, War Chieftain, Stalkers, Jump pack, and so on . 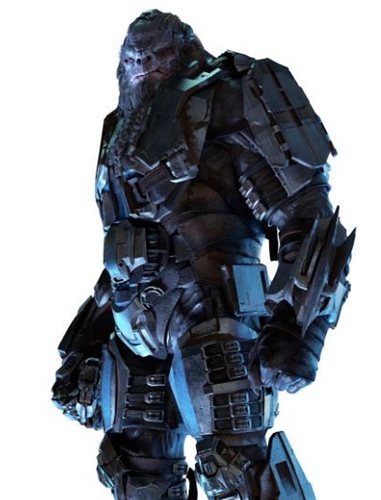 If done well, I would have no qualms with this big ape.

This is a guest I’d be more than happy with.

Realistically, I see him having a good chance for coming in. People want an ape character, and this guy will cover that, plus use a warhammer that distorts gravity.

I would prefer to see Tartarus (I was hoping for him for a while), but Atriox is really growing on me. He seems to be a big deal in that he stood up to the Covenant AND survived. He’s already (in my book) the best Brute in Halo canon. Also, being the antagonist for next year’s game (which is the same year KI S4 will be announced hopefully), he’s the perfect guest to use for advertising for both HW2 and KI S4.

I’d say cool, but if anything else from Halo we need a spartan first. We already have a non-human representative in the game. Spartans and Elites are always top tier, then Brutes and flood & grunts & such.

As such, I propose Buck, because he covers all human soldiers, Spartans, ODST, etc…plus he has a more interesting personality than Chief, who can still be represented with accessories and color options.

Nathan Fillion fans would flock to this game if that happened.

…and fans of Firefly, and Castle, and Buffy, and Dr. Horrible, and…

I’d be super ok with it if his retro was the brute chieftain from halo 2. (I can’t spell his name sooo I won’t type it in fear of butchering it)

That said, I’m all for a sci-fi alien ape that wields a “gravity hammer”. I don’t even know what a gravity hammer is, but I want it.

Tartarus the brute with a voice as smooth like velvety sweet chocolate lol but I am so down for a brute to be in KI.

Yeah, Tartarus was voiced by Keith Michael Richardson, a fairly popular voice actor that has done lots of stuff, such as Shredder in the new Ninja Turtles cartoon and Bulkhead on Transformers Prime.

I would much rather an actual original ape than another halo character in KI.

yeah tartarus was such a bad ■■■ he would make a great retro for Atriox. I would be super excite. I totally agree a brute would do wonders in KI as a Guest. (this is coming from someone who doesnt want to see too many more Guest Characters).

would perfer both in all honesty

Then we would have two apes.

IDK I think Arby is enough to represent the Halo franchise on KI.

I had NO IDEA I wanted Atriox in Killer Instinct until I saw his trailer. The trailer is so SIIICK OMG.

Yeah, I saw it a week ago or so… That hologram is cute too - too bad she’s just a hologram…

If you liked that, there’s another scene somewhere where he single-handedly dispatches 6 Spartans.

I’m really torn here. On one hand, I absolutely do not want another Halo character in this game. I mean, wasn’t Arbiter supposed to be the guy to get some Halo fans interested? Now we’d seek to dip into that pool again, only with another non-Chief monster, and from a SPINOFF RTS game? Is that a good idea?

Plus, there are other franchises they could cull from. If they have to do that at all. I like Joanna Dark, but outside of her, I was really kinda hoping that we wouldn’t have any more guests. More original KI characters, less other stuff. I’m not on the “we need a warrior gorilla” bandwagon, but even if I was, I’d have to think a fully unique, brand new character that IG could mold from scratch would be more desireable.

I saw that trailer before and came away impressed. Love the background they built up for him and he has a very cool look; sort of like a grizzled, killing machine that’s a complete wildcard. Is one trailer enough to make me want him in KI though? I don’t know that it outweighs my personal negatives, but I DEFINITELY see why people would want him!

He certainly looks good, and it’s some one who can round or my team of big guys (excluding Gargos, I’m not very good with him) raam, eyedoll, and that guy