Are some characters naked?

It’s a serious question. For example, look at Cinder, his body is made of flame and he’s human. Is he fighting naked with accessories?

Glacius and Gargos I also question if they are naked.

I ask these questions you may think are ridiculous, but why does Sabrewulf have shorts on as default? Is he hiding something and the other characters aren’t?

It just seems odd. Same goes for Rash and Riptor.

Sabrewulf’s pants are the remains of what he was wearing before he transformed. Everyone else, aside from Cinder, who was a willing lab guinea pig, isn’t a mammal, so there’s not really anything you’d need to worry about hiding.

So does that mean Cinder is naked?

When you compare them to humans yes.

What one would call “naked” characters.

They are actually all naked, but with accessories on. Some accessories are just bigger than the others, like shirts, pants and the like.

Cinder isn’t actually naked. He’s actually wearing a special suit. It’s the only thing that allows him to control his fire… Otherwise he’d literally just be a walking sun. This suit is based on the suit that Glacius wears, recreated using his stolen technology by Ultratech (so he’s not naked either).

Amphibians and Reptiles don’t have external genitalia (at least until it’s time to mate), so Riptor and Rash are fine.

Sabrewulf is wearing pants on his default and a shirt in his Retro. He’s also got a loincloth in the retro, in addition to having that…sheath dogs have.

Gargos is all natural, but since he’s an extra-dimensional being I don’t think we could comprehend how they reproduce., which would explain why we don’t see genitals.

A little imagination goes a long way…don’t you think?

I would like to thank the OP for bringing this important issue to our attention, and request @Infilament’s opinion on the matter.

I would like to thank the OP for bringing this important issue to our attention, and request @Infilament’s opinion on the matter.

I will have your head on a platter for this.

Actually Rash isn’t naked, he has a belt. In cartoon world if a character is wearing one piece of clothing then they’re considered fully clothed. Hence why so many Disney and loony toons characters have shirts but no pants.

loony tune characters have shirts? Usually their fur/hide is treated like clothing.

He’s also got a loincloth in the retro

no he has more of a bush 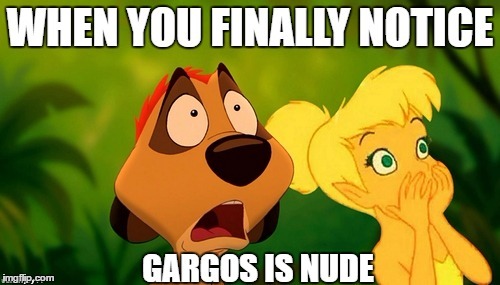 Porky Pig usually had one. I think the only one that was fully clothed all the time was Speedy Gonzales.

All of the human looney tunes were clothed, thankfully.

I will have your head on a platter for this.

Since Gargos has a belly button that means his a mammal? Does it mean he was born from mommy Gargos? This is confusings! I can’t sleep!

Nah, seriously, for me it has to do with aesthetics decisions, that’s it. Honestly I like how they aproach all this “nude” characters. They look pretty cool. I don’t like drawing werewolves or dragons with clothes either. Is not they are nude it’s just they don’t need clothes. But accesories are just cool looking =3

IDK what r u talking about, but I would not mind naked Orchid.

It kind of looks like he has a suit on. I wouldn’t call it naked. I think it is said he has a containment suit so he doesn’t go super nova.

Well maybe not Glacius since he technically has that shell of ice around him, but Gargos is for sure naked.