Anyone pre-order this thing?

Yeah, that seems really pricey, like you could make one from scratch for cheaper than that. Much cheaper. I don’t see how you can justify that price tag, especially when people are kinda stretched thin as is right now.

Yeah, it’s pricey for sure. Honestly, the 1up cabinet I covet the most is the X-men 4 player cab. But they are all cool. If this was $250 I would own one. But as it is, I would almost have to upgrade the joystick and buttons and possibly the speakers as soon as I got it. And build a platform even with the riser to make it full heigh. So we are talking $1000 by then and for that price you can do a lot better.

For me, the cost of these things is the only reason I didn’t order any, as I wanted the Mortal Kombat and Teenage Mutant Ninja Turtles ones, and now this.

Thankfully I have all those games on Xbox 360 and Xbox One X, so I can play them when I want, just not in a cabinet form.

When’s the new TMNT arcade style game coming out. That one looks good.

I imagine with the right know how, the right tools, and the right equipment, you could make one far better and it would be far more rewarding an effort, and probably cheaper.

I’ve contemplated getting the wood supplies from a home depot or something if I ever had the surplus budget and make one from scratch. It would be work, but I bet if would be so rewarding to play those games on something you built yourself.

Still, beats the prices of certain original boards. I would love to have a CvS2 cabinet, but anyone who has one, and knew exactly what they had, would probably want more than what these 1-up cabinets cost.

I haven’t heard anything more since the announcement, but it does indeed look fantastic!

Well, there’s also the fact that I’ve always stunk with stick, and only ever did good in fighting games back in the '90’s on the home ports where I could use a Controller.

Any idea on price? Couldn’t seem to locate it. Going to guess it’ll be $999 or somewhere around there. Man, I’d love one of these…

I think you’re pretty spot on with your guess. I saw an article about them saying they were expected to be around $1000.

It’s really cool. But as is almost always true, you could build a much better quality and more versatile machine if you took the $1000 and just put it together yourself. I would have one already but I already have access to KI arcade games on my xbox and don’t play them.

Same. If I had a large basement with plenty of room to start a nice arcade collection, I’d love something like this, as I’ve never even attempted to put together my own arcade unit, but given the assumed price and my lack of anywhere to put it atm, I’d have to pass. Still a nice option for those that have both.

I got one. It was a steep price, but I’ve always wanted a cabinet as I love games. KI also was tempting enough for me so I finally made the jump won’t be getting anymore cabinets until I’m in a bigger place. 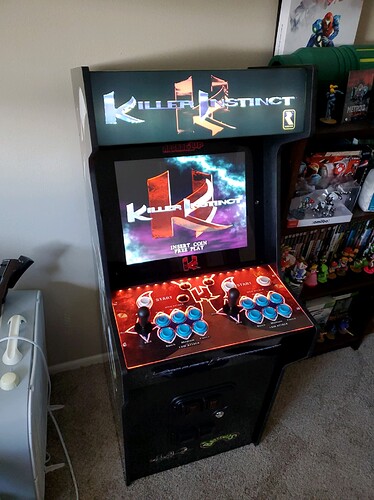 Oh yeah it’s sweet. There’s added incentive for me to actually learn the older games now. Can’t be losing to guests on my own machine right???
Might mod it down the line but am pretty happy with it atm

Ah, love to see that someone actually got one!

How would you say the quality is?
Sturdy construction?
Good, responsive controls?
Hows the LCD and speakers?

Sticks are better than I anticipated. Buttons are responsive. The whole thing feels sturdy. Not as good as like a madcatz stick with Sanwa parts. It feels like it can take a beating and last a long time though.

Cab construction wasn’t too rough. Had to reassemble one part because the instructions didn’t immediately draw my attention to detail on one picture. No worse than an involved ikea item.

It was a fun project and was able to stream the construction. All and all I’d say if your on the fence but not because of money, it is worth it.

That said 700$ was kind of steep for me and I know it is for alot of others. I am enjoying the purchase though.

The games are exactly as found in arcade. If you want a practice mode your best bet would be to stick with the versions available on xbox one. They offer an attract mode with sounds or a silent mode for just background ambience. Rgb stock lights on the control deck.

I find myself to be a bit of an audiophile. The game sounds fine in the speaker when played loudly, some of the bass gets lost on a lower volume but once your at like 8 or 9 it comes through nice and deep, crystal clear highs. A bit muddled in the mid range, but this is remedied by the option for headphone output so this doesn’t bother me too much.

Panel is fine, serviceable. It has some filters like smoothing or crt filter w/scan lines (what I use) and that helps make it feel more authentic. It’d be nice to have a real CRT with this thing, but I understand we live in 2022.

The riser makes it a bit wobbly, but not Topsy turvy levels of wobbly. They have an anchoring kit in the box that I just didn’t set up, which would probably remedy that issue.

My biggest gripe is the stool. While it looks great it was a real P.I.T.A to put together. Once assembled though it matches looks nice and is comfortable to sit on.