Anyone else reached Killer Rank this week?

I figured out my Tusk is poo so I stopped using him in ranked but you gain more than you lose so let’s say that first match I lost maybe 25 points or less and the runback I won 30 or more points.

Tusk is poo? No, he’s broken and braindead is what he is - a tasteless barbarian, if you will. Watch the clip below to see why I believe he needs a damage nerf…

@moderators Um, how do I link to my clip from the Xbox website (as in not YouTube)?

EDIT: NM, I figured it out.

Not a mod but I thought you just copy paste the link? Worked for me.

I never said Tusk was bad I said “MY” Tusk is poo.

I am just speaking for myself here who hasn’t even gone to the lab with any of them or made a huge effort to learn MUs.

I am just not as good with Tusk than I am with other characters mainly because my number one weakness is trying to get in from fullscreen.

congrats to everybody that are killers.

not there yet, but moving up (hated rank reset … but realized only when losing)

I have little interest playing rank in general but I think I might try to just see what the excitement is.

The good news is that I’m actually winning fights now and may actually get to killer rank like I feel I deserve. The bad news is that I’m so disenfranchised from ranked leagues already, I’m only playing a few matches at a time before I get bored. So, in other words, it’s going to be a while, but not because I’m losing… 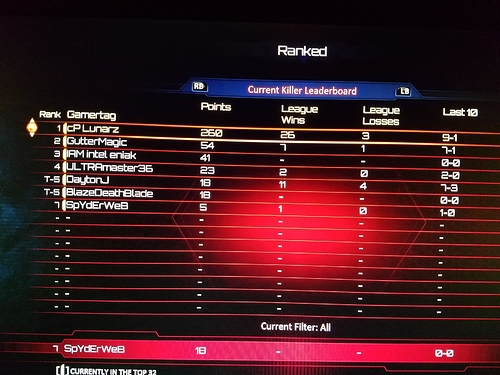 There were only 7 Killers at the time… period. Get it?

Found out that i am #58 with Omen. So thats something, i guess.

GutterMagic has the highest win rate with omen, and over a thousand games won with him, and even HE doesnt think omen is top-tier.

So i may have finally exhausted all of Omens “secrets”. Now i just have to improve MYSELF to get to killer tier.

I guess 1 hour of combo breaker training with every character may be enough to help me get there!

Just got it! Loads of smurf accounts during early stages of gold, but stuck to my mains and got through it. So glad I won the promotion match, was my only one thankfully, versus a gold ranked Kim who had some nasty manuals and cancel tech.

Now I can play as the whole cast again

The competition seems to be intense and is preventing me from moving very far in Gold. I qualified to Bronze and fought up to Gold, but for some reason I am facing many, many, great players who know how to beat me.

I guess 1 hour of combo breaker training with every character may be enough to help me get there!

I’m killer now, but i really don’t think i deserve it…

Took me about 3 hours from silver to gold, and 7-8 h from gold to killer.

Maybe i got lucky, but i tought it was harder(from what i read in this forum)…it’s also pretty much my first fighting game.

ANyway it was fun, now i’ll start playing another character.

Made it. Everyone in Killer uses Kim Wu or what?

Yepp. Very happy to be in Killers again. Still need to work a lot on my Rash as 36 losses is too much. I never got blown away by anyone, but in the end a loss is a loss. Gotta improve. 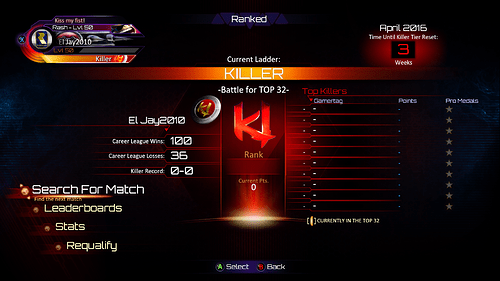 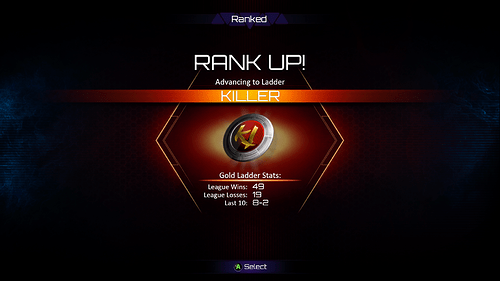 Finally made Killer Rank myself. After making it to the killer promotion match twice, and losing it twice, and having to grind back to it, twice, the third time was a charm. I even managed to get a perfect once. Anyway, glad that grind is over.

I told myself that today would be the day. As it turned out, it wasn’t. That’s what I said to myself yesterday, since I finally achieved killer tier mere minutes after midnight.

It feels oh, so good to be back where I belong - just like the good ol’ times.

Open an ear to hear and you just may shed a tear at what I am here to say. Don’t, and you just might find that you’ll have to pay. Because you see, in my tale, I did not fail.

I qualified into silver - that’s where I began again. Like butter, I cut clear through the competition. The silver qualifying match? Torn apart like tissue paper; no 2nd tries there. Then into gold I went, determined at first, and discouraged weeks later - but I persisted, and on I went. Trudging through the mud, I accepted my 1st promotional match towards the fabled killer tier, and then before anyone could bat an eye, I won it on my 1st try. No cries of anguish over a 200 or 150 point reduction here for me - no sir! I shed no tears. Not for me - and certainly not for those who have fallen before me.