Annihilation and Ultimates for all Killer Instinct charaters POLL

this is a request since first season more than 2 years ago .
who remebnber this . 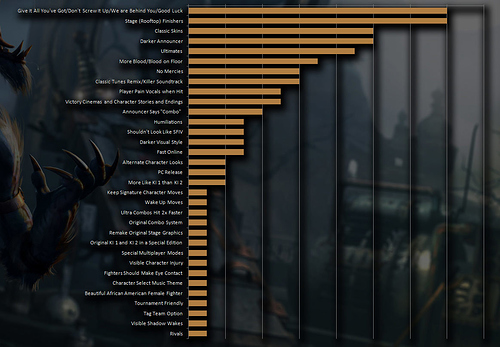 and totally agree on this thread

The "Release Ultimates for all Characters" Request Thread. Share your opinion! General Discussion

Today Shadow Jago’s moveset was revealed together with his iconic Ultimate. So this means everyone will get an Ultimate in Season 3, right? Apparently this may not be the case. During the stream the devs mentioned that Shadow Jago will be the only character in the video game which has an Ultimate. It is sad to see that the potential of the iconic Ultimates (which finally work now) may be wasted. Ultimates add another layer of depth to the game which makes it truly more enjoyable: The idea b…


was on the number 4

just look how gorgeus look this

But its not Phill Spencer fault.

IG is a pretty small studio there is only so much they can get done.

Id rather they spent the time making the game play gorgeous.

Shadow jago looks awsome and the game is SO well balanced. Balancing takes allot of time.

Id love ultimates but the game must come first

Thanks for inviting me! what I think, is if Ultimates get in the way of a complete game, then hold off on them until the game is finished, then work on them.

Personally I’d prefer ultimates and annihilation on just Shadow Jago, just because it seems so oddly fitting to him, considering that he was the secret final boss and that it’d fit him well. Almost like he has the ‘Killer Instinct’.

if i m good remember he said actually only shago had a ultimatme . probably on that update . but surely they gonna have it for all the cast

hats a must be no DEALS!

are u new in KI

??? just wondering cause that fit to every killer characters thats the basis if i can say .
Ultra, ultimate,humiliations, knock-off, fatality just a remembering

no. I’m just saying it fits more on the basis of Shago himself rather than anyone else.

Corruption does fit well tho with Shago.

We never get roof stage and ultimate for KI characters… That very lame
: (

I’m going to start another poll where we vote if the word “Ultimate” should be suspended from the english language for a month.

Ultimately, you will have to set an ultimatum to ban this word if you feel this is the ultimate solution.

I don’t think everyone should have Annihilation, because I already don’t like it’s just Shago’s old Ultimate animation. It keeps the guy unique, and it’ll bring a lot of claims towards stealing from Street Fighter around.

I wouldn’t mind Ultimates. I don’t think they’re exactly the “staple of KI” as many have said; that really goes to the combo system in general, and more specifically Ultras.

But the new one for everyone’s favorite real boy is excellent, and it does feel odd that he’s the only character that can actually “kill” anyone; not even Omen gets that privilege, and if what was said in the stream last night is right, even Gargos himself won’t be able to truly finish someone off, and that has to wait for the next Killer Instinct, whenever it’s made.

If it makes IG’s work easier, I wouldn’t mind only villainous characters having them (Kan-Ra, Cinder, ARIA, etc.) because at least there’s a running theme with Ultimates only being used by the scummiest of the scum in the KI universe.

I dn’t see annilations as nessecary but Ultimates are something I certainly want. I admit though this may be getting out of hand. But I don’t think it would of had to happen if they had just worked on them for later after season3.

It feels so wasted. They figured out how to get Ultimates on all stages, why try to figure a solution when they were probably not even gonna do it in the first place? some folks feel that is one of the reasons why they may only be hiding it to keep us surprised, but others feel IG just dropped the ball and said “sorry, you’re screwed”

The annihilation move has to be different from the ultimate or it’s not gonna worth it They have changed their minds about Shago’s exclusivity. There’s a little time yet to try saving ultimates for this game. Maybe bro, maybe…

The annihilation move has to be different from the ultimate or it’s not gonna worth it They have changed their minds about Shago’s exclusivity. There’s a little time yet to try saving ultimates for this game. Maybe bro, maybe…

I honestly am not sure if they have. Unless they directly said it themselves.

If the word “Ultimate” is banned, wouldn’t we ultimately go into a state of confusion of Ultimately losing the ultimate word:

It’s like that South Park episode where too much profanity triggered a curse and got a bunch of people killed… if we say “ultimate” too many times, Gargos will smother us in our sleep.

This should be the part when I say, So? GARGOS AINT GOT NOTHING ON ME!

Maybe Ultimates can be treated like Supers, as suppose to a fancy end of match song and dance. Just have certain criteria to enable the move for each character. Basically give everyone annihilations and call them ultimates. Fulgore and Omen already have theirs…sorta. Just a thought.

Shago can keep his annihilation for himself, but yes Ultimates for everyone please!