Welp now that I have put in so many hours into this. Finally gotten all the characters dossiers. Now just awaiting for Kilgore, Owl Guardian, and Mask of the Ancients. 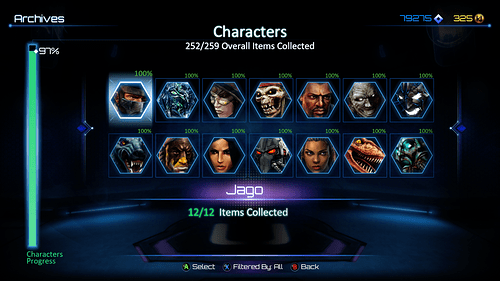 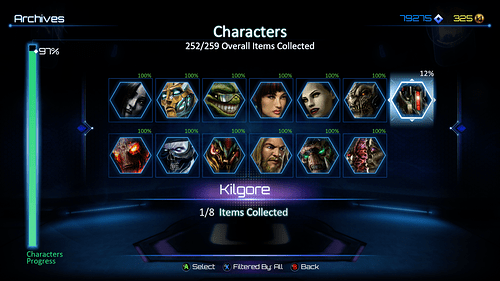 The way I did it. Is to have Omen on your team and have fight the Omens. It’s how I got mine.

Holy hell, you actually did it

That is amazing. I can only imagine how long that took. Good luck getting the rest on Tuesday. Congratulations.

Congrats! I’m at roughly 70% on character dossiers and 100% (except mask and owl of course) for everything else.

Omen is stingy, I’ve been needing only one more dossier from him for months now lol

NICE! My problems are Jago,Glacius, Spinal, and the crimson guardians. I am at 76%

I got these by grinding missions with those guardians. You can get them using the auto option on missions too.

I’m only one dossier away. Trying to get the last TJ one now.

These last dozen have been exponentially slower.

I’ll be at the same spot after that, except for that Hatchery’s Secret III which seems glitched because I had it in the preview. Sitting at 97% overall.

“She’ll never crack this q-code I made to scramble this journal!!! Human brains still trumps bot-brains!!!”

Yup…quite the scramble there buddy. That’s why I’m reading it.

I am missing that one also. I see that people are having problems with the Omen dossiers. I got those during the beta. IG really needs to have a thread explaing how to get dossiers in detail. Half the time I don’t know if I just can’t get the dossier, or if is bugged. Some dossiers go from not being bugged, then a patch comes out, then they become bugged.

WOW! Great job! I’m sitting at 62%, but I haven’t been going for dossier for a while. Just got the “final” mimic skin though!

I wish there was a site where we could read the dossiers, don’t get me wrong I am sure SL is a great gamemode but I am not particularly thrilled about grinding in a fighting game.

Which ones do you want to read? I took screen shots of most of them, planning on doing “something” with them, but haven’t done anything yet.

Or are you just talking in general.

I’m sure they will be put up on a wiki eventually.

Finally got them all as well. Was it worth it? I dunno. It certainly wasn’t fun. It was getting unbearable when you get to the last 10% and you need to get lucky just for one of those characters you to pop up at all, not even considering the chance of it actually dropping. I think they really need to increase the probability of drops for that reason alone. I really can’t see the vast majority of people having the patience for this, especially if playing on an Xbox console with much slower loading.

Yeah I was referring more or less in general, but I guess that eventually someone will let us know them being up if/when that ever happens.

Hmm… are Kilgore dossiers able to be unlocked or what?

Doesn’t look like it. Aside from the first one, which you get by finishing Hot Lead, they still all read “Kilgore Unlocks will be available when Kilgore is released!”, which says to me that he hasn’t been fully integrated into Shadow Lords yet. I haven’t run into any Kilgore mimics today, so that seems like a safe bet.