About the Tusk category

Maybe I’m just a racist American but It pleases me to have the first White man in this game. It’s like KI represents us all now. Only fighting game I know with all the shades of Humanity. Does he get Cold tho?

Tusk is back, baby! And he looks absolutely amazing!
I love the Viking look he has, yet wearing modern shorts/torn pants, and with a piece of cloth hanging from the side which has a distinct kilt-like design. Can’t help but think it might be part of Spinal’s and that there is a connection between the two.

Is Jago not white?

He and Orchid are siblings, and they both look like they have some Latin/Asian blood in them, with their tan skin and such. So though it’s not confirmed, both Jago and Orchid look like something else than Caucasian.

this guy was really close with his Tusk concept…remember when this leaked?? Not bad!!!

So…@BigBadAndy …what do you think of Tusk so far??? 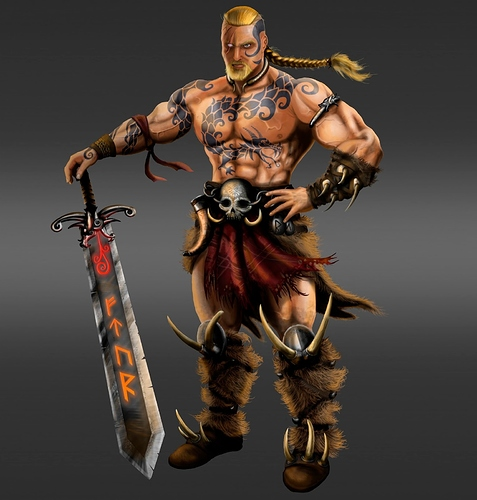 No, you’re not. I have been wanting to have a blond character also for a looong time. And I ain’t even blond myself…

There are a lot of tall,caucasian and blonde men in America. In the northern hills of Scotland, a lot of men are 6’3"+.

There are a lot of tall,caucasian and blonde men in America.

Yes, but those men have genes from other places, as most Americans do. Most likely, as I said, from Scandinavia, as the Southern parts of Europe mostly have black hair and more tan skin.

Thing is… An American is not an American, unless they are from one of the native tribes - at least when talking about the US. But well, that’s a discussion for an entirely other topic, so let’s just leave it at that. ^^

Edit: Thunder is a fully-fledged American.

Nah Jago’s mom is Pakastani so if anything he’s half European American half Ancient Mysterious Pakistan blood line.

No, you’re not. I have been wanting to have a blond character also for a looong time. And I ain’t even blond myself…

I’m black lol but there was a complete lack of Europeans in this game. Now they finally have a White man whose found his Killer Instincts.

Way off topic:
This strikes a nerve with me. I’m not typing this in anger, merely with the intent to inform.
Born in America = American. Ancestry is a different matter, and not relevant to one’s nationality.
Native Americans’ ancestors may have been around before the ancestors of other Americans, but that doesn’t make native Americans any more American.
I’ve always found it odd when people try to downplay the heritage of others based on how recently their predecessors arrived on a given chunk of land. In fact there’s some geological evidence indicating that native Americans may have ancient Middle Eastern ancestry… If true, does this diminish their status as American?

When I was living in Russia, older Russians would, with an arrogant sneer, try to tell me I have no true nationality because I’m American and America is too young and too mixed to have a dominant race warranting nationality. (Russia has an outrageous percentage of people with pure Caucasian ancestry.) I’d tell them “age is no sign of virtue.” In other words, significance of nationality is not marred by the youth of your respective nation or how recently you came to be of said nationality. Nations are defined by borders, language and culture. Not race. Not ancestry. Not ancestral origin. TJ Combo is just as American as Thunder.

Bringing the topic back around:
There may be tall blonde Americans of Scandinavian origin… But they are Americans nonetheless. We Americans take pride in our ancestral diversity.

But ancestry is what we were talking about, not nationality. And the gene-pool for tall and blonde Caucasian people are most likely due to having ancestry from Scandinavia.

Tusk could just as easily been born and raised in America and thus be American, but that was not what we were talking about. And I did not intend for this to turn into a debate about racial or national purity.

That said, I’m sorry to hear you’ve had problems with people judging your nationality.

Sorry. When you said “American is not American” I started to bristle. I know you meant nothing disparaging.
Like I said, the subject just strikes a nerve with me.
Sorry about the off topic rant.

I hope his theme isn’t some kind of crappy heavy metal… No offense to the heavy metal lovers.

I hope his theme isn’t some kind of crappy heavy metal… No offense to the heavy metal lovers.

It most likely will be metal, but it would be cool to have it mixed with some orchestral music to make it sound more epic. Maybe with some heavenly choir too.

I have a feeling that his theme will be a sort if orchestral power metal mix, though from the tease it sounds like it’s leaning towards orchestra. I’d love to hear some of the strings be electric, since that’s my preference,but either way I’ve got high hopes.

If it’s reminiscent of what we hear in the teaser, I’ll be happy.
As long as it’s not like Cinder’s or Fulgore’s music I’ll be fine with it.

Not a fan of the more electronic genres?
I love it, but I agree, it would not fit a character like Tusk.

Meh, sometimes electronic works. But I like your orchestral idea with a choir. I trust IG to do the right thing.