Hello. So I’ve tried contacting Xbox support, doing all these things to try and fix this issue but no luck.

So I got a new laptop recently, and I use the Windows 10 store version of KI due to it having all my Xbox progress that I’ve had since the game came out back in 2013. When I launch the game, it goes through the splash screen, and then the title screen. I click start, and then it goes: “Checking downloadable content and syncing shadows” and then immediately crashes to desktop with no error message or any of that.

Welcome to the community!

Can you list your laptop’s full specs? Firstly, let’s make sure the system is properly up to snuff for the game.

I can probably send my dxdiag file if you want

No need, your system is more than able to handle the game.

Are you using the latest drivers for your video card, and the latest Windows Updates?

If that doesn’t work, I’d recommend uninstalling and re-installing the entire thing.

Unfortunately, I’ve tried all of that, and it still doesn’t work.

I’m also tagging @KRAKENJIMMY. He worked on the game, and though the game is done, he occasionally pops by and helps people with support issues.

I will guess we’ll have to wait for them then. I’ve tried the Microsoft Store support as well, and it unfortunately didn’t help.

Okay. Outside of waiting to see if KRAKENJIMMY replies, I’m not sure what else to tell you.

Welp, i haven’t been able to play my game for more than a week now. I think it is fair to assume this game is just dead.

I’ve tried emailing Iron Galaxy themselves last week and I haven’t gotten a reply. What a shame.

So something odd is happening. I think the reason why it crashes, is because the game isn’t even installed. When I install the game from the Windows Store app or the Xbox Game pass app, all it is installing is the ■■■■■■■ title screen. I see the data for the app and it’s only 8 KB.

Getting help and support for this is like talking to a brick wall in terms of MS support. I have lost any and all hope.

The game certainly isn’t dead as it’s actively played and the Xbox One version just received a compatibility patch for Xbox Series.

Iron Galaxy won’t reply though as they’re not working on the project anymore and haven’t for years. They were a third party contractor, so the company responsible for upkeep of the game now would be Xbox Game Studios. Xbox Support would be the likely support resource that you’d want, but if you’re having PC installation issue off of the Windows Store, then you’ll want that support department instead.

To confirm, you’ve uninstalled the game, and are re-installing it with the same account you purchased the content with, yes?

Yea. For some reason it will not install the entire game. It refuses to and quite frankly I’m just done. I bought the Steam version but it doesn’t carry over my progress, so I’m just going to refund the ■■■■ thing. This game decided it’s not going to work and I just give up at this point.

The only other thing I can suggest is:

Nope, that doesn’t work. The Windows store for some reason is the biggest example of Microsoft’s utter incomptence to PC gaming as a platform. Good luck getting anyone to reply to this, I’ve tried the subreddit and it’s ■■■■■■■ dead. And all my progress, all my level 50 characters I busted my ■■■ to grind for are just gone, because I had to shill out money for the Steam version and start back from square one.

■■■■ you Microsoft, your customer support is trash and I’d get more useful information by talking to a ■■■■■■■ koala than your automated ■■■■■■■■■ And Iron Galaxy has pretty much wiped their hands clean of this, so good luck getting any support or help from them. I spent 5 hours in a customer support chat and various phone calls and NOTHING has worked. We can’t get that one guy to get on here so at this point I’m just done playing it entirely. I’m not going to waste my time with a game that refuses to work and customer support that is braindead.

The Windows store for some reason is the biggest example of Microsoft’s utter incomptence to PC gaming as a platform.

Correction: That would be Games for Windows Live and the premium multiplayer they tried to force upon PC players last decade, actually.

For the Windows Store, I’ve personally had very few issues with it gaming-wise, and so do most of the folk I know.

Others, sadly, have had issues, and it sucks that you’re one of them.

And Iron Galaxy has pretty much wiped their hands clean of this, so good luck getting any support or help from them.

As I mentioned, Iron Galaxy was a company contracted to develop the game, and their contract ended back in either 2017 or 2018. Their involvement with the project is done; they haven’t wiped their hands of things they’ve literally completed their work. The game and the property are owned by the publisher, Xbox Game Studios, not Iron Galaxy, and any further support is from them. The recent 3.x GB Xbox One patch for the game was done by Xbox directly, not Iron Galaxy, for example.

That one guy, who did work on the game, was helping people as a courtesy and because he’s a good guy, he wasn’t being paid to do this at this point. He appears to be an independent contractor as well.

For your own issue installing the game, it still sounds to me like it’s one of two things: 1) something on your system specifically, or 2) an account issue. A few more things I’ve thought of:

Well I do have the game pass app. And there are 2 different versions of the game pictured here:

When I try to install the one on the left, it stops at 0% and gives me an error. The one on the right is the one that just installs the title screen.

I also have reset the microsoft store app.

Do you have a link to the official KI discord, perhaps? Also sorry if my replies were getting more angry as they went on. Been…going through quite a lot of crap this past few weeks. Anyways.

By “Game Pass App,” do you mean the Xbox App? If so, then there’s a difference between ours. I have the one you see on the right, and that’s the actual game. I do not have the one on the left, and instead I have Killer Instinct: Definitive Edition, which is the “hub” from that edition of the game (which I also have installed).

So it does sound like you’re installing the correct one (the one on the right).

May I ask what region you’re in? Are you in Europe, by chance?

I am part of the Killer Instinct Discard, and I’m happy to send you an invite, though I don’t actually know how. I’m not overly familiar with Discord. If you can walk me through what I need to do, I’ll shoot you one.

And no worries man, sorry to hear that you’re having a rough time in general. Hopefully, in time, things start to turn around.

And no worries. I frequently use discord, so lemme show you how to send invites.

Basically just go into the server and click on this icon. There you’ll see an option to invite people in blue. 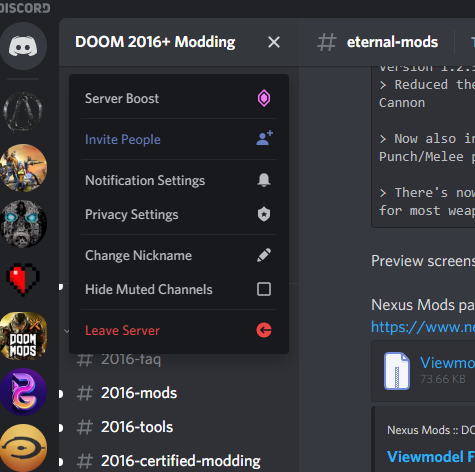 When you click on that, you’ll see a link at the bottom. Just copy and paste that link here 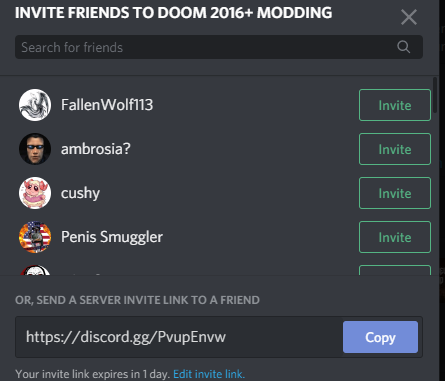 Awesome, thanks for the walkthrough.

For being in the US, odd, you should be able to see the game’s Definitive Edition as well…