Hey guys! I decided to try my Windows 10 KI out for the first time in a while. I’m running into an issue where my game is just constantly searching for an opponent but never finding anyone. It’s been searching for about 30 minutes now. Is there anything I can do to fix this issue? I’ve already uninstalled and reinstalled and it doesn’t look like it did much. Thanks!

Open up the Xbox app, go to Settings, then check the Network tab, it should tell you if you are connected to the Teredo servers or if there is no connection, then reply again with the result.

I have the same problem but when i press the settings button on my xbox app, the app crashes.

To Scrubbot:
Then it must be your windows install. But there is a small chance that if you create a new user acount on your PC it may work on that account. I did that once when i had purposefully messed with necessary windows applications and deleted the xbox app. When i created another local user account everything was reinstalled just on that account.

This started happening to me yesterday. I believe it is related to the recent Windows 10 Updates (patch Tuesday) that Microsoft released. The Event Viewer shows the following information about the crash

At first, I thought it might have been related to installing Visual Studio 2017, but I uninstalled it, and the same issue occurs.

Microsoft released an update for the Xbox App. You should be able to view the Settings option in it now.

Yea it works now but i still cant find games

WHat does the Settings------>Network tab says? 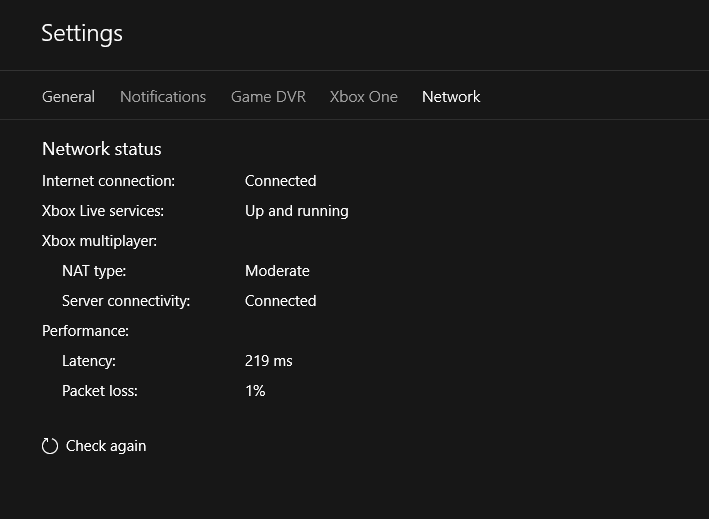 Looks completely fine, don’t know what could be the problem

Thanks everyone who replied. it looked like my two problems were that Teredo wasn’t installed on my comp at all. After installing it I had to windows update to get it working. I can find matches now but a’lot of people keep disconnecting from me. I’m in probation now because of it. I have a LAN connection straight to my router so I really don’t know what it could be…

I have had the problem every once in a while where the game wouldn’t connect online and if so I would back out & try again and then the game would freeze.
For me it was a simple fix: restart Win 10.
Also the non-connect/freeze tends to happen when I have gone for hours/days without a full OS restart.

Don’t know if it will help, but it usually works for me.

The game doesnt do anything for me except sync in steam when i try to play it… says i played 3 hours but i dont remember playing on steam, ive had this problem for a while now with the steam version, i do remember buying it on windows store around when it came out and played it a few times but had PC trouble and had to reinstall windows and thats when i got the steam version some time after i reinstalled windows.

i uninstalling the game twice with steam and reinstalling it to try and get it working then uninstalled it again and didnt try reinstalling untill yesterday, but the game still doesnt work for me…