Will We See The Return Of 'Descriptive' Character Names?

I’ve noticed that the new KI has a lack of descriptive character names. And when I say descriptive, follow me for a second here

Cinder - Man on fire
TJ Combo - self explanatory
Spinal - bone man <—lol. b0ne is a censored word
Sabrewulf - werewulf
Glacius - ice dude
Fulgore - sounds violent enough for me to classify as descriptive
Riptor - Same thing (btw, the single greatest name for a fighting game character ever imo)
Chief Thunder - paints a pretty good picture of character to me
Eyedol - cyclops (with 2 heads, but whatever)
Black Orchid - Sounds like a good name for a female spy/operative
Maya - an ancient Mayan(?) lady
Tusk - an ancient barbarian guy
Gargos - A living gargoyle
Jago and Kim Wu - The only 2 exceptions to the rule in the first 2 games

Sadira - I would say she’s sadistic, so I think DH at least wanted to stick with the formula, if not toning down the cheese factor from the older games a bit.

Kan Ra - ?
Aganos - ? Rock Lee RollerCoaster would have been my suggestion
Hisako - ?
Aria - ?
Omen - hmmm… I’ll give them this one I guess

Kan Ra means “Sun Priest”, Priest of the Light" or “Servant of the supreme ruler.” Depending on how poetic or literal ancient titles are to mean.
It’s a cruel irony to burn him… As to prove he is a servant of the power that the sun brings.

Hisako means “Long lived child.” As an immortal, and yes it matters in many culture afterlives for a reference of innocence, virgin-teen, it fits.

Omen is the herald of Gargos… But we don’t call him Harold! So Omen follows as a synonym.

Given the names that Rare originally did, yeah, we deviated a bit. It’s much harder to come up with ones that combine ideas well that aren’t really cheesy and maintain the style of the originals. We had lots of bad ones.

Some that were thrown around / discussed:

The issue with some of the ones above is they sound like they belong in MK, and we didn’t want that. They also completely lose aspects of their origins, and we wanted to place these characters in time and locale so they had more “meat” to work with for creating their stories.

So instead we went a bit more highbrow with the meanings. Hisako translates to “eternal child”, Aganos to “a person of gentle disposition”. Kan-Ra, is as @thyReaperMC mentions above.

I wish they had stuck with Gauze for Kan-Ra, sounds a heck of a lot more KI to me.

I have some nostalgia for the old names but I am glad they went the way they did with the new names.

The old ones don’t sound cheesy to me just because I am so used to them. If I heard the new characters named Gauze, Crush, Spectra I would cringe pretty hard.

Good to know on the Aganos. Still surfing for mo’ lore on the name and golems

maya isnt a mayan warrior im pretty sure, she speaks portuguese so she must be from brazil which afaik wasn’t part of the mayan territory.

Edit: Before someone says it of course brazil didn’t exist at the time, what I mean is that where brazil is now was not where mayan territory was.

Thanks for the reply! Would be cool if this info could make it into the game in the extra’s menu, maybe somewhere near the the concept art. It’s always interesting to hear the thought process of the developers. Especially who knows how many years from now.

I’d chalk the Portuguese up to the character evolution/reboot of the new KI.

But as far as the original Maya goes: 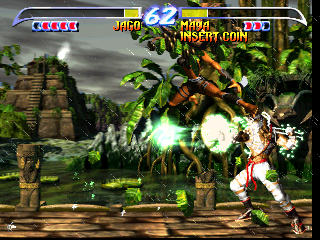 you convinced me, never played the originals too much.

Well, Tusk’s stage in KI2 was a rip-off of Stonehenge, which makes no friggen sense whatsoever. So background features in classic KI stages mean nothing to me.

Would be cool if this info could make it into the game in the extra’s menu, maybe somewhere near the the concept art. It’s always interesting to hear the thought process of the developers.

Mark this up as another request for character making-of’s.

In all likelihood, yes. BTW and FYI too, Sadira’s name means “dreamy” in Persian/Farsi. Overall her name is of Persian origin