When the Rash Tech Pays off

So I ran into this guy maybe 3 times, VERY good arbiter… Lost the first 2 encounters, by a small margin… but oh god, when I beat him… the salt became real O_O 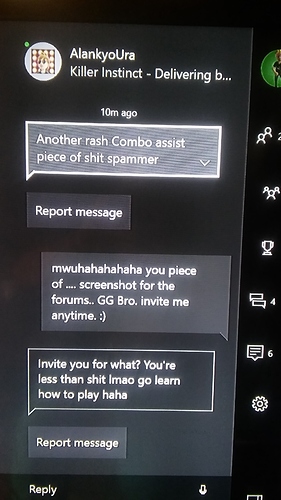 Thing about it, I find combo assist impossible to use.

I have a lot of these. They hate my Fulgore zoning.

Lol i beat that guy a few days ago with rash also, even used him as an example of how not to use arbiter’s grenade in the nerf arbiter thread. Didn’t get any hate though, guess that means I need to thrust more.

Lol damnit… I didnt thrust one time… definitely should have.

Just beat him again, still no hate message, what did you do to him?

I have a dream that one day people will except Rash as the great and hilarious character that he is and get over their salty sooo serious attitudes and just have fun playing the game. As for those who choose to remain salty, well prepare for maximum thursting!!! Uh uh uh thurst uh uh uh thurst!!!

Bruh… no idea… Other than beating him with only half my green bar missing… No idea… I was a loving opponent lol.

He beat me before… dunno where the salt came from ???

Combo assist? Was he talking about rash’s light kick/punch battle manic character trait thingy, still kinda new so I don’t know all the terms lol? It’s one thing to be upset over stuff, you’re investing emotion in something so it’s bound to happen, but this just seems childish. I advise a massive increase in thrusting to help soothe this man’s fury.

There is nothing to be proud of making someone rage. cuz there are other plyers out there who would make you rage even more

NO ONE can make me rage bro… it’s a game, I play for fun… since… its a game… ya know?
Being angry in a game, when no money on the line is ridiculous. I managed to get from 1500 points in ranked to about 10,500 in almost a day and a half… and if someone completely stomped me, i’d say GG as usual, take the loss to my points and move on.

I might rage quit if I see someone going into a second ultra… but thats just a given… its a waste of time… And thats hardly rage quitting. If you rage to the point of anger and lashing out in a game,you shouldnt play that game.
So yeah… I take joy in rage, and I find it hilarious

I don’t think that logic applies to everyone. not everyone will rage quit.