What's going on with the inputs?

Is this happening to everyone or just me?

When I’m performing a move, and change the direction of my inputs and press another attack button, the game will not register the direction I’m pressing. This happens with all characters. It’s hard to explain but try this:

Do a standing HK, then immediately press and hold down on the D-Pad (or stick). Your character will continue to stand and won’t crouch unless you let go and press down again.

This has ruined many matches for me as my character will do a standing attack rather than a crouched one as I intended. It’s hard to play at your best when the moves aren’t coming out as you expect them to.

Anyone else experiencing this?

You’re not the only having this issue. I tried to do a Demon Blade (Sadira) to counter a jump in and got Shadow Web Cling instead.

Many times a sanding HK (juggle) won’t change to the direction I’m facing.

Every time I play with thunder and try to do his spinning tomahawk move it only does it once even if I try to do the move a 2nd or 3rd time and goes right into sammmamish every single time.

Please post your experience, with video (+inputs displayed) in the bug thread. This is horrendous and needs to be fixed ASAP.

@developers Just in case you are unaware of such bugs existence, this is the sort of thing that needs to be sought and addressed immediately. Correct directional inputs are essentially 50% of the gameplay. So long as all of these directional input bugs exist, the greatest fighting game ever to exist is virtually unplayable, as it is unfortunately more than half non-functioning.

With zero programming knowledge, I have noticed that these reports of directional bugs became commonplace after your overhaul of how the game interprets and recieves directional inputs, and several have suggested it to no avail (instead you spot-adjusted on incredibly specific case-by-cases, and left a bunch untouched because the issue was never case-by-case), but it really may be in the games best interest to undo those major changes. We understand you worked hard on them, but it really seems like they are destroying your game. Don’t let that failed undertaking exemplify your pride before the fall of this masterwork of a game.

Hello KI Community and welcome to the new forums! Here is our official bug reporting thread to let us know of anything you may find in Season 3. Please follow the instructions below. In order to help us get the most out of your bug reports, please follow these basic guidelines when bringing a bug to our attention. When posting in this thread, please be as specific as possible. If we can’t recreate the issue we won’t be able to figure out what’s wrong. Be concise. Try to get rid of unnecessar… 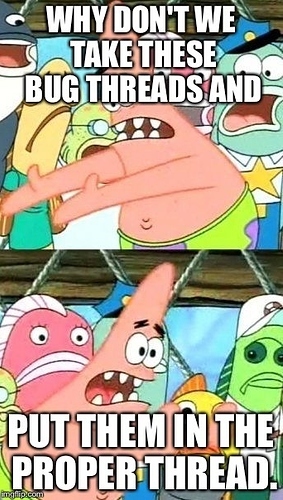 No problems here. Did your example and I’m crouching the moment I’m able to.

The mystery has been solved.

Apparently the brand new controller I bought is defective. The D-Pad has some wiring issues and doesn’t register directional inputs correctly. I tested with another controller and all was well with the world.