What should Mira's combat trait be?

I’m curious. What’s Mira’s combat trait going to be once she comes out? Any theories?

I think she will have bats or a blood meter

The Blood gauge thing might not be far off but, why bats?

The ability to get health through certain normals. No extra meter.

Maybe she will get a special meter like Fulgore, but instead of being a bar that fills by some random thing spinning, its a bar that fills up with blood as she dishes out damage, and she has certain moves that fill the bar quicker or in big chunks, and once its full (or as it fills) her stats increase. So her backward and forward walk speed increases, forward and backdashes are improved, a slight damage buff etc.

Well obviously she’s going to be a bit bitey. 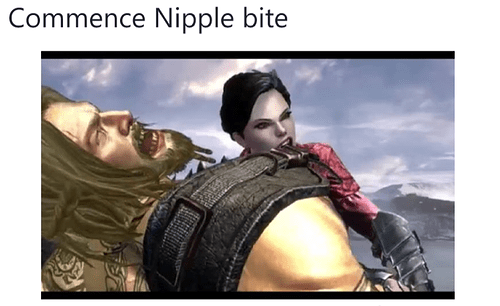 On a serious note, she seems like she has a lot of air tech from what we’ve heard. A really good Jumping HK specifically, as well as “set ups/tools”. My guess is she has an air/pounce command grab that can be used as a special ender that regenerates health, or some other sort of drain ender (i.e. like a battery ender, but the meter gained is taken from the opponent).

We need this somewhere. At first I thought this would be something Kim Wu would have but I think this vampire chick can have it.

Wouldn’t air combos be a bit of a rehash of one of the things that makes Sadira unique? Not that we can’t have two air combo-ers in the game, but they’ve done such a good job with keeping characters unique so far, you know?

I had a really random idea for this, a Bloodlust combat trait. It would be damn hard to balance, but it would make for an interesting mechanic. Basically, Mira is in a state of bloodlust throughout the match. She will steadily lose HP over time, so that if both characters stood still, she’d “starve” a health bar over the course of about 40 seconds (which would come out to about 9 HP a second in drain). This damage would not be potential damage or normal damage, but specifically denoted by a red bar, which will come into play below.

Scoring hit damage, not chip, on the opponent would fill up a “sate” gauge that would grant her certain buffs. At about 25% full, she would stop losing health due to hunger. At 60 to 75%, she’d be “nourished” and gain a slight advantage in speed or priority, to symbolize her being at peak shape. At full gauge, Mira would start regaining the health she lost from hunger. This is why it wouldn’t be just normal damage. She could lose a round/game due to starving to death, but it is unique damage so she isn’t gaining health steadily when she’s on a tear in a match. The gauge would naturally drain if she isn’t getting hits in, which means catching her in a combo would lead to the gauge steadily depleting, or even just playing patiently will start to wait her out.

Then for instinct, it could just be a Berserk effect that fills the gauge, granting all normal buffs from feeding as well as maybe a slight damage increase or a life-absorb effect. Perhaps a very modest one, but something to play off the “feeding from another” when she’s getting hits in, not just nourishing her but rejuvenating her.

That definitely sounds like you would have to be constantly attacking for that gauge but, if it’s going to be replacing the Shadow Gauge then every time you use a Shadow move then you would quickly be losing those benefits to balance it out.

Oh no no, I meant for it to be a secondary gauge, like with Hisako.

Wouldn’t air combos be a bit of a rehash of one of the things that makes Sadira unique? Not that we can’t have two air combo-ers in the game, but they’ve done such a good job with keeping characters unique so far, you know?