What happened to the rogue Fulgore unit from season 1?

In the Season 1 story mode we are introduced to this rogue Fulgore unit which starts to reject orders and regains memories presumable from Eagle. 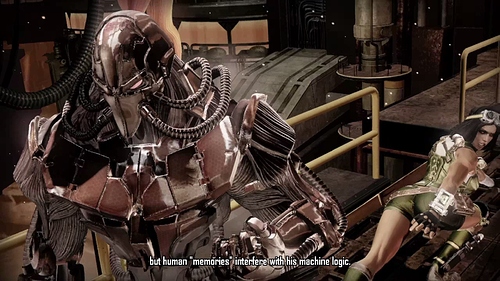 Good question. Maybe that will be explained in the new comic book series.

Thats Fulgore the character…is it not? That was his outcome and his “personality” going forward…The Fulgore.

The devs have said that Fulgore is not Eagle, but rather that his software runs on an emulated copy of Eagle’s brain. Eagle being freed has no effect on any of the Fulgore units functionality.

As for the rogue Fulgore, his story is continued in Shadow Lords. If you play with Fulgore as your captain, you’ll get a special mission where you fight Thunder. I’m not going to spoil what happens so you can play it and find out for yourself! (Or just go on YouTube and look for the Shadow Lords cutscenes I guess)

The rouge Fulgore is the Fulgore we play in game

Also this Fulgore is the only MK.3 hence why it is far stronger than the other jobber bots and can defeat top seeds like Chief Thunder

Right, in one of fulgores videos it says they will catch him and reprogram him but that the spark of life or w/e will still be there. All in all i really don’t like how they butchered fulgores story for the sake of bringing in eagle and sticking him with the archer trope when he fights absolutely nothing like fulgore so what was the point of giving him eagles brain in the first place if none of his moves get translated. cyborg robo-cop > robot with brain copy software.

Well I’m pretty sure eagle knows more than one fighting style, also he and fulgore share many attacks like S.HK, C.HK, F.MP, etc. Not sure how eagle could play like Fulgore without essentially making human Fulgore. As for his story I’m not sure how I feel about it yet. From what I know the Fulgore you play as was with Aria when she, and the stalker unit were going after Tusk. He was also being searched for by Thunder and Aganos since they knew he had some connection to eagle.

Well you could look at it from the other point of you, why doesn’t fulgore play like eagle? I just think that if you’re going to use a fighters brain, that you’d give him the tools that he’s most familiar with. If you put my brain in side of a robots body it wouldn’t change what moves i know, granted he could learn to use the new body but i just see it as a wasted effort to take a fighter and give him a body that doesn’t move like he trained his old one to move. It should have been something along the lines of how cyrax plays as a human or as a cyborg, he still essentially has the same moves as his human self.

That’s a good question - my understanding of the reason for using Eagle wasn’t to teach combat. It was the intangibles that made Eagle a tournament champion. Previous models fought clinically but without the desperation or inventiveness that makes for a truly deadly opponent and they could be exploited - the exception being Kilgore, and the errors which made him were too unreliable to mass produce. When the Mark 2s turned out to be jobbers ARIA had to look elsewhere. While ARIA is self-aware and conscious she obviously doesn’t want that in a subordinate machine. So the Mark 3 is her attempt to weld human desire and willpower with mechanical fighting ability, not to weld a machine to an esoteric human fighting style.

Oh man I somehow typed point of you lol

Because Eagle never had access to any plasma claws or laser beam eyes. If you gave mike Tyson a machine gun and said “go fight” he would fight differently too.

right but lets say whoever he’s shooting at can get up close, then good ol mike will bite his ear right off. He won’t forget his signature moves.

I think the aria for newmorph novela mentions this Fulgore.
Aria goes through her vault of nic-nicks and mentions a fulgor that became sentient, and was shut down.
She kept it in the vault as a curiosity.