@developers
Proposal for KI as a wendigo king character :

(it means king in the elvish language.)
(bird’s name is GURTHA. It means death.) 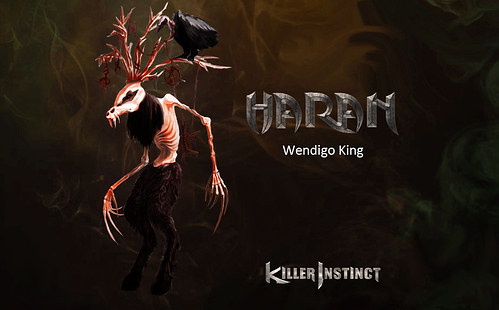 ok give me some time

Welll I noticed the bird… soooo uses bird as puppet character. we got our puppet archtype.

Considering wendigos are Native American (not elvish) and they aren’t particularly well known for having any sort of government, and the wendigo we have in the lore are all subservient to Mira’s coven…
This is very weird.

story: there is a reference for a wendigo king in the novella.

i gave him a bird, so that he can be combinational.

Haran has a bird which he can command to fly at any time, like a floating projectile. While on air GURTHA (bird’s name) can attack if commanded.
normals:

1.down to up hit with both claws (anti-air and launcher)
2.forward dashing is running, by pressing P he can perform a deer-like jump and hit the opponent with the claws, pressing K the bird attacks first.(each button does something while running)
3.he can fully disappear, while that, opponent fights only against the bird. if the opponent hits the bird Haran reappears.
4.he can sink his claws in the ground and grab the opponent for distance while the bird can hit the opponent.

1.forward multiple hits with the claws (mid-close range)
2.forward huge hit by the horns (chargeable) (like the move of male deers while fighting)
3.standing down-to-up hit with the horns(like a bull)
4.master of the trees move: a huge tree-like hand comes from above and hits the opponent (Ent like)

during instinct the bird goes over the opponent and bites him simultaneously. during that the bird is invincible.

well wendigos do not exist in the first place. but i thought that as a forrest being other forrests being would have been aware of its existance. because wendigos do not have names, its name came from the elves. his powers where so big that they called him king of the forrest, or king, or haran.

That’s all fine and good. But it does not explain why you gave a monster out of Native American folktales a name related to European fairy tales (and if you’re using Tolkien elvish, contemporary European fiction).

And if we’re going off of the Native American lore that inspired the wendigos we see in the lore, it would be the name they had in life before they were consumed by their hunger for human flesh.

ok at first a wendigo(as a being) is older than native americans. its powers come from other ages. i guess that in those witchcraft ages elves existed, not only in europe but everywhere in the world. their european heritage is the only that has left.

about the name. yes he can have an actual name but he is too old and nobody knows it.

And if someone were to give a wendigo a name, it would be a name related to the culture that created the wendigo legend. Just like how Hisako was named in Japanese, or how fossils discovered in certain locations are given names based on the heritage of the area (Guanlong for example, is named for the long -or, Dragons- of Chinese mythology).
Just change the name to something that makes sense for what the character is. The gameplay ideas are interesting, they just need a more appropriate framing.

I have wanted a Wendigo since I discovered KI and I think one would fit right it, and based on my (limited) knowledge of the beings they are creatures of certain native american myths, so one could be a perfect rival to Thunder.

Well look at it this way Agano’s is a Greek golem. Golems originally came from Jewish folklore.

Well look at it this way Agano’s is a Greek golem. There are no golems in Greek mythology. Golems originally came from Jewish folklore.

Well, he’s not THAT kind of golem though. He is more a construct of elemental power than he is a man made of clay. Golem has become more a fantasy-term for man-made constructs which are animated by magical means.

for the second special move something similar to this (chargeable)

also made this poster 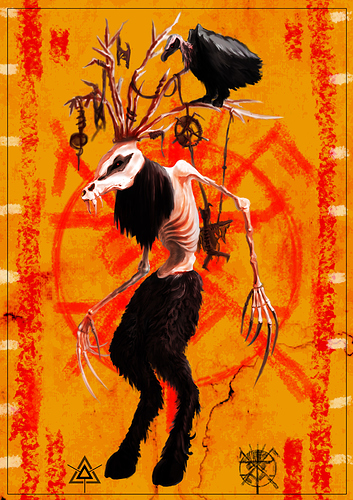 Why does he have a garbage bag stuck in his antlers? lol… just kidding

It is where he puts garbage comments.