Hey, I hope ya don’t mind me adding some character art/ideas.
I’ve been wanting to contribute something to the community for a while now, but work and stuff keeps getting in the way.

I was originally going to do an Insect, a Succubus and a Witch design.
Today is just the Insect, I’ve drawn the Succubus already but haven’t done her stage or anything extra. I’m guessing she’ll be finished by the new year - hopefully (I’ve got my exam projects to do still.)

Everything I add is just for sharing, anyone in the community can use, edit, redraw any of this stuff for whatever. I can upload the line art if ya need it. Name : Cryptid , also referred to as a subject number UT926

Traits: She’s a grapple/zoner, has the ability to counter some moves/projectiles. She can not jump, but can walk on walls and along the roof. She has multiple stances, and can temporarily stick opponents to the wall, floor or ceiling.

Back story : Created in an Ultratech lab, subject UT926 was designed to be a living weapon combining traits found throughout the insect kingdom.
During the battle with Gargos, subject UT926 escapes.

She cares not for the fate of the world, and is only concerned with her primal instincts:
1 to survive,
2 to reproduce.

She is capable of parthenogenesis and can produce offspring without a mate. Which she has done in an abandoned church where she now lives.

Cryptid can detect strong life-forces and seeks them out to feed to her offspring, therefore she is naturally drawn into combat with the other characters.

Cryptid is a mimic. She was designed by Ultratech to hunt humans. She basically lures them in and then strikes when the prey is too close to escape. The picture shows what she looks like in her human ‘guise’ and normally.
The four yellow spheres on her head are her real eyes.
The black areas on her body offer armour properties, where as her soft underbelly is vulnerable to attack.
The legs and arms that are black in colour have matured/hardened and are none retractable.
The small pale tentacles on her upper body have not matured and are retractable, as she ages the body will elongate and the tentacles will mature into more legs.
The areas that look like human eyes are actually spiracles through which certain classes of insect breathe. Called so because of what it is and also the shape. This is Cryptid’s nesting ground.
This stage also represents Cryptid in that first appearances are misleading.
It initially looks like an abandoned overgrown church in a rainstorm, however when the lightning flashes it reveals another story.
Those aren’t plants all over the walls and floor, they are cocoons, some of which are shaped vaguely like humans or animals. Some are still moving.
When the lightning flashes the surface of the cocoons appears waxy/shiny.
Also you notice the small glowing orbs? Those are eggs laid into the cocoons, the lightning makes them glow momentarily for a few seconds.

The dark pit in the centre, when the lightning flashes you can see it’s filled with hundreds of wriggling shelled creatures (offspring.)

Stage ultra
Activated in the centre, the opponent is knocked up into the air and into the dark pit. Lightning flashes a few times, and the opponent can be seen being swarmed by hundreds of the baby insects.
Then the lightning stops and it’s pitch black in the pit, you can merely ‘hear’ crunching (nom nom nom) noises. Lol.
So basically, in the stage ultra the opponent is eaten by Cryptid’s offspring, although nothing gory is shown it is implied.

Round one is mainly fought in the dark during a rain storm.
Round two is when the lightning starts at regular intervals.
Round three the storm intensifies.
During the ultra , lightning strikes the building causing the windows to shatter and part of the roof to collapse.

You’re in a dark abandoned church, there in the distance with her back turned is a woman, she’s crying. You can only see her from the waist up. The camera moves closer, slowly.

She notices the camera, stops crying and glances over her shoulder. You can hear an ominous rattle noise echo around the room but you can’t pinpoint where it’s coming from, the camera is still moving closer.

She turns to face the camera, the longer you look at her the more unusual she looks, almost alien.
The camera is still moving in closer.

When close enough she let’s out a shrill scream, her face bursts open, the tentacles and blades open up, her body lurches up and back revealing what she really is as the room is filled with a violent rattling noise.

She spits at the camera hitting it, the camera falls to the floor still looking in her direction, she reaches out with a hooked blade and drags the camera in close.
Her arms, and legs arch back as if she’s getting ready grab/attack the camera in a pincer-like movement, which is when the image pauses and the scores flash up on screen.

A blade flurry, she then grabs the opponent, slams them into the ground over her shoulder, hooks them in, repeats the above, then finishes with a few dash attacks and a launcher at the end (from which players can extend the ultra.)

Parasites , (or Cryptid’s larvae,) crawl out from holes in her shell and swarm around her body.
Coming into close proximity or any contact with the opponent will lead to parasites sticking to them, which feed away on the opponents health and meter giving it back to Cryptid.
The more you come into contact with the opponent whilst the instinct is active, the more parasites become attached to them, therefore increasing the rate of health/meter loss.

Ultimate
Cryptid spits right into the opponent’s eyes which stuns them. She dashes forward and wraps around them in a snake-like grapple. At which point she literally vomits the viscous liquid onto them and keeps picking away at them with her legs and pincers. She does this a few times in quick succession leaving the opponent in a cocoon.
Opponents can break out of it by mashing the buttons or until Cryptid combos them again, assuming they still have health.

Below are a few thoughts on moves, transitions and stuff like that.
Firstly it’s thoughts on making a long-bodied character work within fast paced game play without cluttering up the screen Second is about her stances. Third is about her bind ability and dash/transitions. Fourth is about her projectile attack Fifth is her blades attacks 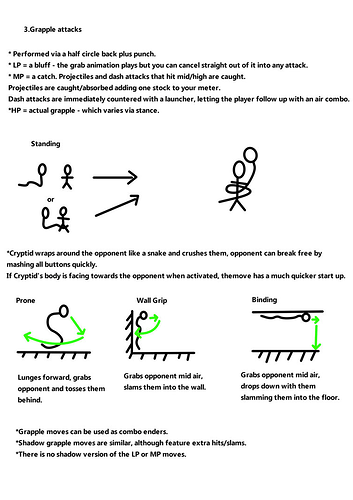 I hope some of that made sense, lol.

I had a few weird ideas for cosplay costumes, I know guest characters aren’t for everyone, and there’s a lot of games people like that will never get a look in so I thought it’d be a good opportunity to make use of old IP’s without guest characters taking up space on the the roster, (not that I have anything against them.)
I’ve decided to stick with MS IP’s only. Sadira’s stage, (particularly the old colour scheme) use to remind me of some kind of pirate cove.
So as a cosplay costume I was thinking of female pirates in MS games, which made me think of Zola and Seth.
I really like Zola’s colour scheme, the fawn skin, silver hair, blue top and black bandanna really go well together.

This design is practically a costume swap with minor changes.
The sword is just a prop. I love Blinx, I also love Hisako, this seemed like a good combination.
Partly due to pop culture, but also Hisako’s stance, movement,posturing is animal-like at times.

This costume was fifty/fifty. I thought the t-shirt/shorts would have looked too goofy, so I went with a traditional cat-girl cosplay in Blinx’s style.
The big problem is that Blinx has ginger hair and a blue top, which unavoidably makes her look a lot like Kasumi from DOA.
I did try out a few different colour combinations, but decided to stick with Blinx’s main colour scheme.
I cleared up her complexion, and gave her a wild/dishevelled look.
Kinda feel tempted to do a zombie version.

Lots of detail, which is why I think I’m actually repulsed by it. It’s genuinely creepy and I do not like vermin with that many legs. Sadira is enough for me when it comes to crawling things. Otherwise, good job (I do have concerns about how some characters will be able to attack her while she’s clinging to the walls and ceiling though).

I like it. A lot of details and that makes it really cool. Especially the move concept art you created. This is the best insect related concept I have seen on the forums. It’s a pity but I would love it a lot more if you chose a different insect to fashion her from. My favorite mold to use is a praying mantis but using a more assasin focused body, riptor sized, more low profile than real mantis, super mobile(wings, dashing, jumping and brief camouflage) and steel sharp bladed arms instead of the saw spikes normal mantis has

Thanks, that’s a good point.
A lot of the characters don’t have great aerial abilities, perhaps her time spent on ‘the binding’ could have a maximum limit before being forced to drop down , (like 10 seconds perhaps?)
Or maybe the height of the binding should be within the average aerial attack range?

Her body literally covers the entire wall in the ‘wall grip’ stance which shouldn’t be as much of a problem as it’s all open to attack, but yeah, thanks for taking the time to read through my stuff and for spotting the potential problems.

If all else fails, the other characters could be given a special attack that involves dropping a giant phonebook on top of her, lol.

Oh wow, thanks!
Originally I was thinking of a Medusa-like character, but I thought something with legs would look more unusual/original and scary which is when I settled on an insect, so I guess the centipede was pretty much the main choice from the way I designed it.

I was also inspired by Q Bee (from Darkstalkers) the Alien Queen (from the film Aliens) and insects in general.
The mantis is pretty cool and was the inspiration for her arms.

Looking at the insect kingdom there’s all sorts of cool and creepy stuff that could be used.
Here’s hoping we see some kind of insect related character in future games.
Also, thanks for taking the time to read through all that stuff.