. This ideas comes in my head.
@TempusChaoti I need yo advice too please

, nothing lef from what we knew and was maybe awaiting for) but he’s anyway a good design overall ( I think I screwed everywhere enought to say how I likes he’s new design

but when it come to gameplay

.
To me thats just the new game play I find it too heavy and nope enought active.

So i was making a special proposition for a special character. Like tusk .

What do u think guyz , to give @ tusk a choice in selection screen for different gameplay so he could be verry unique

1 for the new gameplay and

2 for the DAAAH style gameplay remakes with some improvement cause new structure. 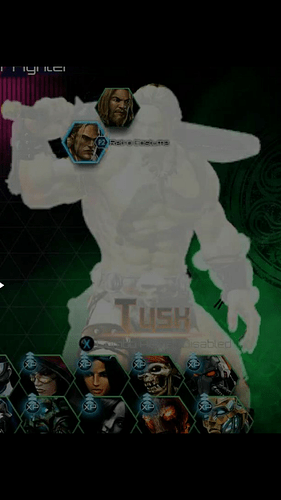 The only thing I would change about Tusk is dark face paint around the eyes.
Otherwise, both looks and gameplay are awesome! Wouldn’t change anything else. ^^

read clearly. What I asked wasn’t to change the actual. It’s was to add a different fight style in selection screen so people can have choice at the way the want to play him . Like in mortal kombat .

Yeah, no… Don’t want that either.
It’s not a feature I would like implemented in KI at all, for any of the characters.

I think it would be better to add other characters.

The challenge here is what you are asking for is a tailor made character to suit your taste. It’s just not possible or realistic that everyone can get a made to order character - no matter how good you feel your vision for the character is.

That’s true what u said . But I think that’s cost too much to make a new character than make a twice gameplay choice mode for the same character

so you are asking for 2 Tusk if I understand? I don’t know why they would do that. good luck

Lol nope 2 tusk . Just the same but a different mode fighting choice at select screen. Like in mortal kombat X .
Cause when I’ve seen the retro he’s just too beautifull to don’t have a Daahhh style fighting lol

so yeah, 2 gameplay, this is more what a meant, but still, good luck

I think it would be better to add other characters.

The challenge here is what you are asking for is a tailor made character to suit your taste. It’s just not possible or realistic that everyone can get a made to order character - no matter how good you feel your vision for the character is.

I voted no. Because that’s just extra programming which can be spent elsewhere. Not everyone got all thier faves the exact way we all expected them to be. :U

That’s true what u said . But I think that’s cost too much to make a new character than make a twice gameplay choice mode for the same character

…Do you by any chance have any idea how a new character is to be made? It’s more than simple modeling, slapping on a few animations and the day is done. Infact that’s the absolute hardest part:

They have to make NEW hit boxes for the new animations, etc, lots of junk like that, then there’s the rebalancing which I bet gets longer and longer each season.

Just better to put that into a whole new character instead.

I don’t think this idea would work in KI. KI isn’t tailored around that specific concept. It’s not able to.

Can you possibly explain what you don’t like about Tusk’s new gameplay? What is it exactly about the old character is missing for you?

You mention “everything’s gone” which isn’t true, and you also mention he doesn’t DAHH either at all or enough, but he does DAHH, it’s there.

So we’re missing, what exactly? The Conqueror flip? Boot Kick? Does he need Boot Kick? I don’t think he needs Boot Kick.

This version of Tusk that we have very elegantly encompasses what made Tusk cool in KI2, and embodies his Conan and barbarian fantasies extremely well. He has more tools than he used to, better reach, and offers a gameplay style that’s already unique.

So honestly, what about him is so disappointing? That they didn’t literally copy/paste KI2 Tusk into a new game with new mechanics?

I’m gonna have to say no. It’s a retro costume. Not character.

Funny thing Is, Tusk still has Boot Leg. I’m surprised so many people didn’t notice, but I it’s been reworked as his heavy kickk normal. If you go back and watch the live stream and look closely when they’re going over his normals, heavy kick is the booty leg. So it’s still there, it’s just not a special anymore. To the op, sorry but no that’s mkx’s thing.

You’re right, and I suppose this is kind of what I meant. He doesn’t need Boot Kick as a special due to the rest of his kit and because he has it as a normal attack.

This Tusk is godly.

I found him too having too ,slow compared to the other version more active and quick . He’s limit slow as (aganos 2 chunks filled) I like the concept but the gameplay

The damages aren’t everything for me I need a real reactive and agressive tusk as before. But no probleme . That’s resolved

who is much more active . I just don’t like slow sleeper and heavy damages givers.

It was just a idea to see how and what people’s thinks about and from the Lil I’ve read I understand and take my responsibility.

=no that man called Tusk for me

Also thank u to everyone who takes times to answer me that was just funny to read . And now I understand. Peaaaaacceeee